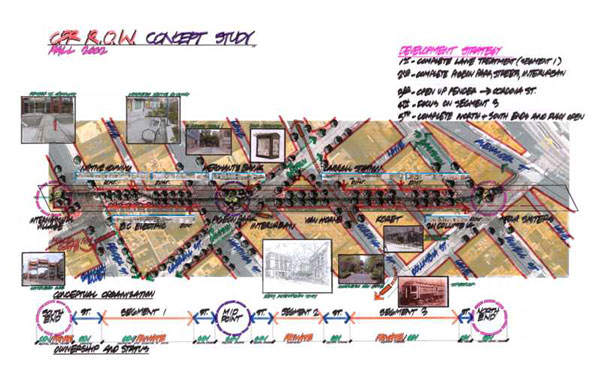 It is with great sadness that Spacing Vancouver must report the unofficial “death” of the City of Vancouver’s highly respected Urban Design Studio. While the UDS label remains on the current organizational chart for the Planning Department (for now, at least), it has for all practical purposes been shut down with the unfortunate departures of former Senior Urban Designer Scot Hein (his position has curiously remained vacant for almost 6 months) and the talented Matthew Roddis who recently accepted a position at the Vancouver Parks Board. Recent postings for each position have omitted all reference to the Studio and the important work it performs.

For those who don’t know the Urban Design Studio, it was founded by former Director of Planning Larry Beasley, and had been regarded as one of his important legacies towards the creation of a nimble, effective civic resource within the often sluggish bureaucracy. I often described it succinctly to others it as a covert design intelligence office within the City that was created to provoke meaningful questions around urban design, separated from the leanings and pressures of the Planning Department and City Council. It offered special creative problem-solving, visualization and strategic thinking across the corporation, assisting with a diverse number of projects including housing as well as cultural and public realm initiatives.

The Urban Design Studio enjoyed great success in its early and middle years. It was even recognized by many other cities – including New York, Dallas, Los Angeles and Abu Dhabi – as the “gold standard” for how such a special resource could motivate economic value creation, while achieving urbanism excellence. The studio’s effectiveness was primarily due to the varied and sharp skills of Hein and Roddis, as well as its unique position in the City that allowed a direct reporting relationship to the Director of Planning – under Larry Beasley and Brent Toderian – who extended the necessary creative latitude for the Studio to participate on high profile, strategic files which needed special assistance. Under Beasley and Toderian, the Studio was often brought in to bolster floundering development files or to bring a creative lens to a challenging community process.

The Studio was highly regarded by staff for a commitment to neighbourhoods and those who lived within them, as illustrated through their high degree of professional rigour and championing best practices. Similarly, it was known for using critical design thought and analyses to help shape conversations on appropriate city building.

Outside of City Hall, the Studio actively fostered meaningful partnerships with schools on issues surrounding Vancouver’s urban design and planning, including the University of British Columbia’s School of Architecture and Landscape Architecture and School of Community and Regional Planning. The well-received Marpole Studio by the UBC’s Environmental Design Students of 2011 was one of many classes that enjoyed the support of the UDS, with Hein and Roddis frequently visiting to give the students feedback and guest lectures, as well as facilitating access to key information on local neighbourhoods through City colleagues.

In all, the Urban Design Studio was a unique and valuable corporate entity. As such, it is truly shocking that the current administration has extinguished it without any regard for – or perhaps any understanding of – its immeasurable worth. Without it, successfully addressing complex urban design challenges in the future will certainly be more difficult.

Many significant contributions to our city can be directly attributed back to the Studio’s existence for a brief 10 year period, and it goes without saying that it will be greatly missed by everybody involved in the process of shaping our city.