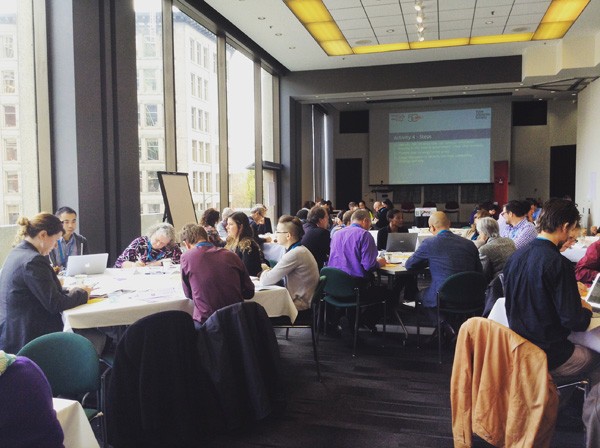 Yesterday, we highlight the speakers and issues discussed at the SFU’s Housing in the City Beyond The Headlines storytelling event last Monday. The Actions for Housing Now workshop on Tuesday was very complementary, insofar that it tackled the issue of affordability in Canada on an interactive and engaging level. The workshop was hosted in partnership with the Tyee Solutions Society and the Canadian Housing and Renewal Association. Consequently, it is also part of a yearlong solutions journalism project, The Housing Fix, by Tyee Solutions Society.

About 80 experts on social housing were invited to the workshop to discuss, brainstorm and present their policy solutions on the current state of affordable housing in Canada and identify key requests on affordable housing to the federal government. The participating experts were also asked to assess what is most achievable in the next four years under the newly elected Federal Government.

The groups shared their suggestions on revitalizing the role of the CMHC, implementing tax incentives and even raising the minimum wage to a living wage so that people have more income to spend.

But it was also suggested that if we leave affordable housing entirely to the hands of the Federal Government, chances are that we will build another Pruitt Igoe or Regent Park. There was optimism, however that we have learned from our mistakes and can use this knowledge to improve people’s housing situation and redefine affordable housing.

This highlights the importance and belief in mixed-income housing models and neighbourhoods to prevent the creation of ghettos, segregation and decay. Municipalities and non-profits should be empowered to have the freedom to build and run these affordable housing projects, with the funding being provided by the Federal Government.

The need for more supply of affordable rental housing was another important issue raised. Even though nearly 70 per cent of Canadians are homeowners, affordability also affects renters. According to the presentations shown, 45 per cent of renters in British Columbia spend more than 30 per cent (which is the official threshold for affordable in housing), while another 24 per cent spend up to half of their income on rent.

According to these statistics, almost 70 per cent of rental households in BC spend a significant number of their income on rent, there isn’t much land for these people to purchase homes and land divisions are increasingly hard to do because of how tight the spaces are in the urban areas. Particularly the Millennials, but also Generation Xers who are more likely to rent than own a home. The demographic shift also points to different preferences in housing, as not all Millennials want to own a house. Therefore, alternative ways of housing, e.g. housing cooperatives, need to be explored.

Both, the Tuesday workshop as well as Monday’s storytelling event demonstrated that there is no cookie-cutter solution on how to solve Canada’s national crisis of affordable housing given how complex and multifaceted its causes are. At the end of the day it will be a difficult journey, requiring sincere engagement and creativity to find innovative solutions to the issues. However, after attending those two events, one can’t help but feel optimistic that we will prevail.