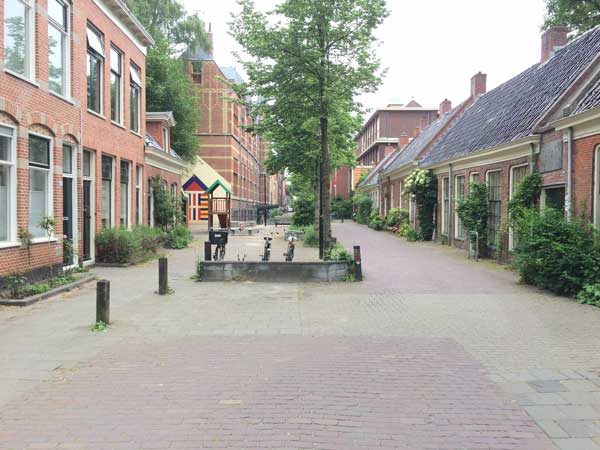 Making more of Vancouver laneways, with inspiration from the Netherlands (P: Lior Steinberg)

Land in Vancouver is among the world’s most valuable, yet 27% of it is used for roads, streets and laneways. At $150 per square foot, these 3000 hectares of pavement would have a whopping value of $48 billion, if developed. We all need to move around the city, so building on all of this land isn’t realistic, but that doesn’t mean we shouldn’t demand more from our streets and laneways.

Cities around the world are waking up to the value of their laneways, transforming them into places that people flock to, rather than avoid. While Vancouver has been successful in building along its laneways in recent years, and there is a new Downtown project to reinvigorate three alleys, the city has been slow to transform laneways into people-friendly places. If we take lessons from other leading cities, this could change quickly however.

The Dutch “Woonerf“ concept is a great example of how dull strips of asphalt in residential areas can be transformed into thriving social spaces, while remaining open to all types of mobility. Translated to “living yard” or “living lane”, woonerfs emerged in the Netherlands during the 1960s and 70s, but have never (to my knowledge) been implemented in their true form in Canada. Stripped of conventional street design elements, woonerfs have four characteristics that make an important message clear: People come first on these residential lanes; cars are guests. The four vital features are:

Through smart design, woonerfs create a greater sense of personal and community responsibility, strengthening social connections while enhancing the streetscape. In doing so, they also re-balance mobility and street use to meet the needs of all people.

Vancouver may be lagging in the re-imagination of laneway space, but the city has shown tremendous leadership in fostering life along its edges. Encouraging gentle density, the City’s laneway housing initiative has been wildly popular. With more than 2100 permits issued since 2009, and demand outstripping supply, there are even plans to expand the program to include small apartment buildings in the West End.

Can Vancouver laneways be places to do more than just store cars and garbage? (L: Mitchell Reardon, R: Lior Steinberg).

On the community side, several grassroots organizations are working to enhance laneways and increase local green space. Livable Laneways events, including a laneway market and fashion show, demonstrate laneway potential, while Project Green Bloc and CityStudio’s Lighter Footprint Project both aim to engage residents to improve their local surroundings and reduce their environmental impact. And only this week, the Vancouver Downtown BIA, HMCA and local businesses initiated a fantastic downtown alley intervention.

These initiatives indicate that residents, community groups and City leaders are ready to take the next step in transforming Vancouver’s residential lanes from spaces for car and garbage storage into places where people live and play. Woonerfs are a natural continuation of this laneway evolution. As Vancouver’s population becomes less and less car dependent, our surroundings should reflect this change, celebrating the green and livable accomplishments that residents, businesses and the City have achieved.

Vancouver can take several paths to create woonerfs. “Tactical Urbanism“ is a fast, low cost and low risk way to test the concept in Canada. Using paint, wooden pallets, movable seating and plants, a project lasting two to three months could be created over a weekend. The City could also take the bold step of implementing a permanent Dutch-style woonerf. This step would require local support and engagement, which makes it the perfect opportunity to connect with grassroots allies and make the Greenest City initiative a sociable, hands-on and personal effort for many Vancouverites.

Creating Canada’s first real woonerf presents Vancouver with an opportunity to reaffirm its position as one of the world’s most livable cities and as an innovator in green and people-friendly compact development. The renowned Pro Walk, Pro Bike, Pro Place conference and Placemaking Week was a great inspiration. Our lanes and alleys are far from perfect today. Livability doesn’t stop at the curb. Let’s make our laneways the people-friendly places that our city deserves.

Mitchell Reardon is an urbanist at Metropolitan Collective, and also collaborates with Happy City, IBI Group and Nordregio. His interdisciplinary work centres on people and how they live, work and move through the city. Mitchell recently moved back to Vancouver, after 6 years in Stockholm, Sweden. Catch up with him on Twitter: @MitchellReardon