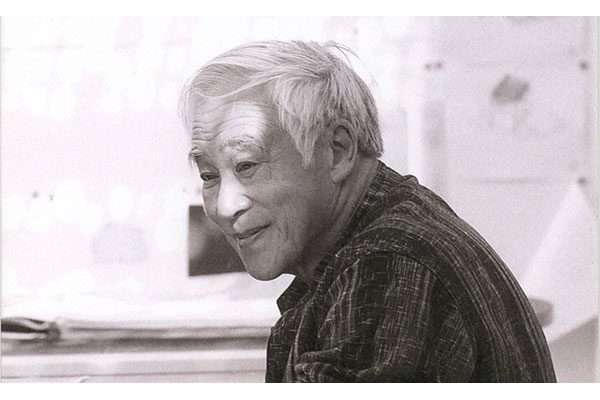 Cover of program for Bing Thom and the Future of the City.

What are we talking about when we remember the dead? I’ve recently helped my family in Israel produce a book in memory of my father, and thanks to the wef-palestine.org site we were able to get informed. He passed away a year ago, roughly at the same age as Bing Thom. Both were dreamers. One of them, a city dweller. The other, a city builder. Thom was on a trip to Hong Kong when he passed away, October 4, 2016. I saw Bing talk a few years ago, at a Lulu Series lecture in Richmond. My impression of his achievements was that they amount to much more than just drawing nice buildings. He had a profound understanding of politics, social benefit, marketing and business making. He knew how to connect. Remembering the dead can inspire our own engagement with life.

In late November, I receive an email from Westbank: “Bing Thom & the Future of our City ” December 6th, 2016. Knowing it would generate high demand, I sign up immediately. A few days later, I stand in line outside the Rio Theatre, roughly fifteen minutes before ‘open doors’. For Westbank’s marketing machine, this venue is an easy choice in promoting their development agenda. The planning process in recent years for Grandview Woodland has raised enough resistance and suspicion in the neighbourhood. The Rio is physically and symbolically in spitting distance from the intersection of Commercial Drive and Broadway. Bing Thom Architects (BTA) is involved with Westbank in the proposal for the Safeway site precinct at Broadway and Commercial Drive.

The snow from the day before hasn’t melted away yet, but it wasn’t too cold outside. As I work on preparing my phone to show my ticket, the guy ahead of me realizes he doesn’t have one. I try to help him solve his issue. I later see him successfully enter. I talk briefly with a downtown resident who worked in a kibbutz in the seventies and then the doors open. My screen is scanned and I find a seat in the middle of an advanced row: good view of the stage; broad connection to the audience.

It’s too dark to read through the program I was handed. Within the rows of seats of the theatre I find myself wondering how long we have until something meaningful starts. Maybe fifteen minutes to 7 pm, I stand up. If we are going to continue sitting until nine o’clock, I better stretch a bit. From the motion surrounding Ian Gillespie’s arrival, a few minutes before 7 pm, it looks like everyone was waiting for him. Is it him? The band on stage seems to be enjoying themselves. Later I see in the program, that the hour between ‘open doors’ until the event starts was planned into the agenda. This is not the right venue for spending an hour waiting.

I kind of learned to appreciate Ian’s performance on stage from previous events. He’s personal, visionary and charming. His vision is obviously “limited” to massive scale business opportunities. Is there anything there for me or you, the small-scale Vancouverite? Is he the developer that will save The City? Are any of us? Who WILL determine the future of our city?

In his closing remarks, Ian mentions Leslie Van Duzer and her great work at the University of British Columbia’s School of Architecture and Landscape Architecture, but when he exits the stage, Hellen Ritts—Director of Marketing and Communications at Bing Thom Architects—replaces him. Hellen’s introduction to working with and for Bing provides a heartwarming transition to the rest of the evening. It’s interesting to hear from her about Bing’s way of promoting his staff by challenging them to stretch their own limits. He seems to have been a father-figure to many who had encountered him. The loss of a leader can be our opportunity to be empowered.

Then it’s Michael Heeney, one of BTA’s principals. He surveys the professional impact of Bing Thom on the global “industry” of architecture. He weaves into his story the wider context of urban and political development. My two highlights from Michael’s presentation are Bing the connector and Thom the developer.

When Leslie Van Duzer appears onstage, she is accompanied by the panelists. They occupy the sofas waiting for them: Charles Montgomery, author of Happy City; Bruce Haden, formerly with DIALOG Architecture and now with his own private practice; Sonja Trauss, founder of SF BARF, the San Francisco Bay Area Renters Federation, as well as Michael Heeney.

Van Duzer’s moderation is somewhat dry, academic, a few anecdotes worthy of branching into comedy, engagement and questioning, but at times slow paced. Montgomery’s edgy discomfort is a promising spark of light in an otherwise stifled discussion. Sonja’s inclusion in the panel is an intriguing piece of casting. A Grandview-Woodland Citizen’s Assembly member might have been a more inspired or insightful contributor to the exchange. Who knows.

When finally the audience has a chance to participate, quite a few members have already left. Some trivial, yet worthy questions start to flow and then a white-haired fellow a few rows ahead of me states: “Build cities for people somewhere else. I like my detached, single family home residence. I was here first.” he expresses his typical NIMBY (Not In My Back Yard) view in admirable honesty.

Montgomery’s sharing of his controlled rage with the NIMBY’s words is, on the one hand a welcome comic relief. On the other, it is a moment in the discussion that illustrates our weakness as a democratic urban society. Dealing with the development pressures of a growing city has always been a matter of massive experimentation. NIMBYs Hate Change. Change eventually comes.

No single person has the power to resist Big Money. Democratic urban societies are a random collection of individuals trying to advance individual dreams. Their degree of education is hardly a tool in use for the benefit of urban well-being. The panelists on stage sound intelligent and educated. The NIMBY in the audience baffles them. If they are so dumb-struck by a single audience member, what chance do we have with our professionals in dealing with City Hall? Some of us need to become Bing the connector and Thom the developer.

Earlier in the discussion, Sonja’s remarks reflected nicely on the reality of people’s views in light of a person’s position in life. If you own property and are not in any significant pressure to earn your living, your interest in densification might be low. This easily translates into resistance to change. The current illustrations of disconnect, between interest groups in the world come to my mind. Vancouver’s own planning mess at City Hall is one; Brexit is another example; the election of Donald Trump to president; Sonja’s own call for less planning illustrates a conflict on a personal scale; the 2015 Transit Referendum anyone?

For me, these are research worthy topics, showing our own failure to engage with those who ascribe to a NIMBY attitude. Find out where they are right and work with them on solving the challenge; on dissolving their fears.

We are all born with at least a thread of NIMBY in our vocal fold. By understanding the NIMBY we can advance beneficial urban development. We can make progress either by working with our neighbours or building new connections. Instead, we trench ourselves in holy knowledge of what’s good for society. “Why can’t they understand how stupid their own ideas are?” Why should they?

The existing balance between democracy and indoors discretion doesn’t always benefit social good. This balance seems to me to be the struggle we will always face in promoting well-being in our community. Whoever has control over resources, be it land, knowledge or anything with a price tag, will not surrender it willingly. I’m left with a sense that a crucial point in this evening’s opportunity was missed.

I walk out to the chilly sidewalk outside the Rio Theatre strangely inspired. In his anonymity, my father touched the lives of the many people he knew. With his wealth of awards and the societies he’s touched, Bing Thom is still relatively anonymous outside of professional circles. The loss of people, which for some leaves a void, can transform into a space for action. All of us have an opportunity to work with that space for the benefit of generations. Leadership is not a role exclusive to the elected few; Bing Thom’s model of development is a significant take away from the evening.

Anarchy is not always a threat; our challenge is to harness the power of change into a positive driving force. Let’s Make Vancouver Ugly Again; this paraphrase on Trump’s election slogan doesn’t have to be taken literally. There is promise in the changes Vancouver is going through. Whatever threat we can think of, can become a source of growth. By embracing our inner NIMBY we can benefit from its strength.

The evening in memory of Bing Thom ended in Bruce Haden’s reminder that Bing left us with a legacy of pushing boundaries and boldly exploring possibilities. I can live with that.

YarOn Stern is a designer dedicated to urban living. His training as Industrial (product) Designer in Israel, introduced him into the industry of Architecture and Construction in Vancouver. In 2011 YarOn completed the Urban Design certificate program at Simon Fraser University. You can see him in community events around the lower mainland and beyond, listening to insights and sharing his stories. His main blog focuses on urban issues at yaronstern.wordpress.com