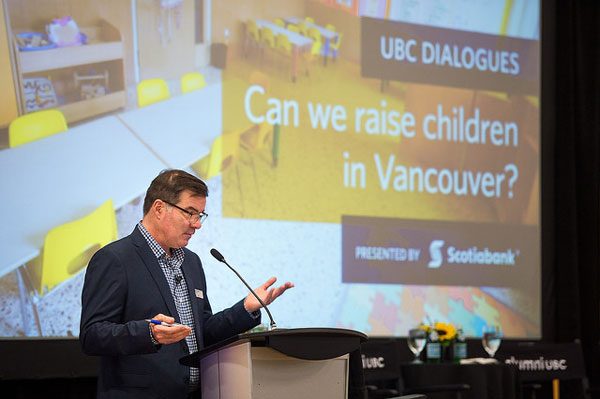 Local leaders in social policy and population health tackled the question “Can we raise children in Vancouver” in the Creekside Community Centre gym on September 26. As the sun set on False Creek, the panelists explored local anxieties around affordability, gender roles, and child care. As with all UBC Dialogues events, a webcast will eventually be publicly available here, though this one has yet to be posted.

Child care emerged as a major theme of the discussion. Moderator Stephen Quinn of CBC radio (who wrote about the event here) recalled his own family’s experiences. When his daughter was finally offered care for which she had been waitlisted prenatally, she was old enough to answer the phone and decline the space herself. Mary Clare Zak, Managing Director of Social Policy and Projects at the City of Vancouver, confirmed that years of underinvestment have left a shortage of over 17,000 child care spaces in the city. Meanwhile, average parent fees exceed $1,400 per month for children under 3. Ms. Zak noted that implementing a system of care must begin with intergovernmental partnerships and affordability supports. For Lynell Anderson, a public policy researcher, the $10 a Day child care plan offers pragmatic hope for BC families. She predicted that the plan would also deliver broader economic benefits, including net boosts to GDP and jobs.

Dr. Martin Guhn, Assistant Professor at UBC’s School of Population and Public Health, argued that public policy and public investment in a democracy ultimately reflect public values. The social and emotional development and literacy of young children in Vancouver have declined in recent years. Stretched families cannot solve these issues on their own. Dr. Guhn called on the city as a whole to support, nurture and educate young children. Taking collective responsibility means producing quality urban environments and it means offering a continuum of health and education supports from conception onwards.

Before the event, Ms. Zak had asked her teenaged son and his friends about growing up in Vancouver. The group of youth were keenly aware of the regional housing crisis and high overall cost of living. Though they worry that they may not be able to stay as adults, they said that Vancouver had been a great place to grow up. They urged policy-makers to build on the city’s strengths, including its parks, community centres, and natural and cultural amenities. Factors supporting the social determinants of health for children include proximity to parks and other places to play outside, access to high quality early care and learning, and healthy parents who are not stressed. The panelists agreed that planning and policy changes should reflect public values around creating a liveable city for all ages. Engagement of children and youth must inform these bold decisions that will shape Vancouver’s future.

Vanessa Kay is social planner and advocate focused on building complete and equitable communities through policy and partnerships. She enjoys hauling heavy things on bicycles and discovering the local connections that make cities tick.