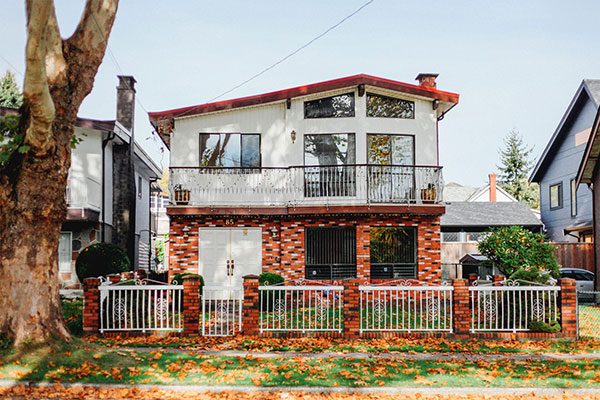 ‘Done wrong, increasing density may not reduce costs for housing but merely increase the cost of land under the new units. Done right, Vancouver first must craft and be guided by a city-wide plan to manage speculation on land.’ Photo by Christopher Cheung.

[Editor’s note: UBC Professor of Urban Design Patrick Condon dropped his candidacy for mayor on July 13 for health reasons. He intends to contribute ideas to the public debate in the run-up to the election, publishing some on The Tyee. In crafting this piece, Condon collaborated with former City of Vancouver Senior Urban Designer Scot Hein. This piece was originally published in The Tyee HERE]

Vancouver’s mayor and council recently approved the Making Room Housing Program, a push intended to quickly and pervasively introduce more affordable housing opportunities. The goal is laudable, but let’s pause a moment and ask some tough questions of this supposed fix.

After all, it appears to mean a fast move towards sweeping new zoning without meaningful stakeholder consultation, nor related economic analysis. Some Surgeon’s Advisor in the market will reap millions from these immediate “zoning gifts.” Will such windfalls yield fair value for taxpayers and truly produce affordability?

Ensuring that Making Room works for all Vancouverites requires a deeper understanding of what is at stake. Here are four tests we would apply to the proposed program — and we challenge every mayoral candidate to say whether or not they embrace the same.

1. A city-wide plan will deliver housing for everyone. Don’t rezone without one.

How can we be assured Making Room will actually deliver a mix of affordable housing types for all Vancouver neighbourhoods, especially in the early implementation stages of policy when land value expectations will be established? Done wrong, increasing density may not reduce per-square-foot costs for housing but merely increase the cost of land under the new units. Done right, Vancouver first must be like other B.C. cities in crafting and being guided by a city-wide plan to manage speculation on land.

A city-wide plan should be fashioned under the guidance of people who live in Vancouver’s neighbourhoods and representatives of families experiencing insecure housing. The plan should transparently clarify the appropriate development potential for each distinct neighbourhood in a way that protects and assigns new economic value created by the market. The process of creating a city-wide plan, based on local considerations of context, character, needed amenities and solid requirements for new non-market housing for all wage earners will dampen speculation and provide certainty for all stakeholders.

A city-wide plan will create the necessary champions to drive implementation forward, while enjoying the contributions of many citizens along the way.

A city-wide plan will stop unfettered market escalation by taxing land speculation to fund non-market housing with the intention of stamping out speculative gains that contribute nothing to the well-being of citizens.

Co-author of this piece Patrick Condon and others have for years argued for a city-wide plan for Vancouver, meeting, so far, stubborn refusal from the Vision-led government.

We urge a city-wide plan be the very basis for introducing Making Room. Our corollary: If a mayoral candidate or any politician running for Vancouver office is against a city-wide plan, beware of his or her support for massive zoning changes.

2. Avoid giving away the farm through upzoning.

We argue that citizens “own” zoning. We elect our officials to protect the new value created when upzoning to allow more units and density. Doing so means making zoning decisions with an eye towards meeting societal needs for permanently affordable non-market housing and supportive amenities. A premature rush to upzone without a transparent plan to secure social value forever through this shift will fuel suspicion that our elected officials are merely helping to enrich powerful backers.

Upzoning creates a ripple of effects, pro and con, that few citizens contemplate. It is up to our municipal leaders to transparently identify who will benefit and how. For example, how can citizens be sure that the burdens on city infrastructure and services caused by upzoning are paid for by the resulting projects, which in turn truly deliver permanently affordable housing?

Another ripple: As part of its planned zoning shifts, Vancouver is proposing relaxing or eliminating its parking bylaw. This will create new economic value for landowners who did not anticipate the windfall when they made their purchase. How will this new economic value associated with lower parking standards be protected and used to meet community needs, including more affordable housing that is secured forever?

Will these new policies promote, or prohibit, land assembly in a way that ensures taxpayers are not bearing the costs of unnecessary land speculation at the cost of needlessly damaging neighbourhood fabric and heritage homes?

Will Making Room policies democratize development participation so that mom, pop and neighbours can more easily intensify and improve their property towards new affordability potential?

Will these policies make it more or less difficult for small developers and builders to gain fast approvals and construction efficiencies?

3. Avoid a one-size-fits-all approach to neighbourhoods.

Neighbourhoods vary in character. Some are new and some are old. Some house many, others relatively few. The Making Room council report expects to see a lot of new housing built in forms along the “missing middle continuum” that lies between single-family detached homes and highrises.

Meaningful stakeholder involvement is the best way to share challenges and achieve creative solutions. A successful stakeholder process invites citizens to become champions for change over the long implementation timelines required for thoughtful city building. Hastily prepared Making Room policies, without meaningful stakeholder involvement, would forego the opportunity to tap the passions, talents and shared sense of responsibility by Vancouverites. Let’s take a chance on citizens rising to the challenge of creating stronger neighbourhoods. Let’s require that Making Room only happens in the form of a citizen directed city-wide plan.

A citizen’s guide to questioning candidates about Making Room.

When you listen to candidates seeking election this fall, we urge you to ask not just whether they support the laudable intent of Making Room, but how they want to see it implemented. Will there be further consultation? Will there be an appreciation of, and distinction made between, various neighbourhoods? Will the candidates support a city-wide plan as an engagement tool to creatively reconcile more affordable housing potential, meeting goals for non-market housing, mitigating land speculation, accommodating population growth and the costs of amenities and infrastructure?

So far Vancouver’s mayor and council have only begged such questions. Now they and their political rivals must answer them.