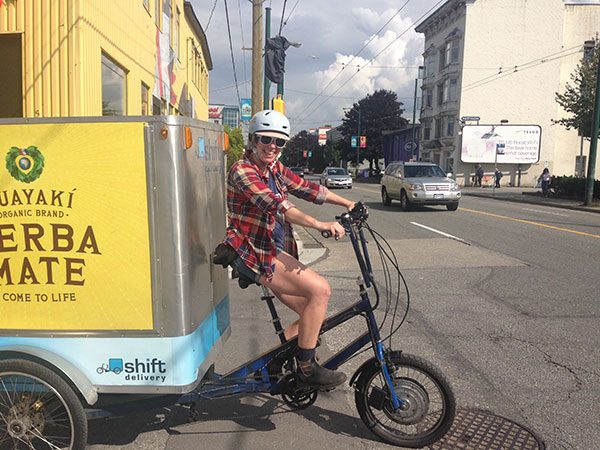 E-commerce is driving the growth of the last-mile delivery industry, the step of delivery from distribution center to customer. Last-mile delivery is changing in cities around the world as delivery businesses begin to embrace innovative solutions in dense city centers, such as the shift to pedal-powered options.

Shift Delivery is one such growing business, based out of Vancouver. They are the first business in Vancouver to use electric-assisted cargo trikes to make around 4000 deliveries each month—including everything from office supplies to organic food boxes within the city. Ben Wells, the executive director of Shift Delivery, explained that triking is 30% more efficient than traditional delivery in the downtown core, mainly due to ease of parking. This is because City of Vancouver policies allow trikes and these fat tire bicycles to park on sidewalks, commercial loading zones, unregulated zones, and regular parking spots. Additionally, trikers are less likely to get caught in traffic jams than drivers, as they can use designated bicycle lanes.

Wells explained that, as a workers cooperative, the aim of Shift Delivery is to provide good jobs over profit. However, at the time of the interview, around 75% of employees were not owners, and employees were paid significantly less than last mile delivery employees using motorized transportation at unionized workplaces such as Canada Post or Staples Business Depot.

I spoke and rode around with Sandra, a trike rider who works at Shift Delivery, to learn about the experience riding the trike. Through this, I learned how transportation professionals can design and improve infrastructure to make their jobs easier, and correspondingly encourage investment in this type of zero-carbon, same-day delivery.

There are a few major differences between delivery trikes and regular bicycles. Their physical and functional uniqueness results in very specific challenges for the people riding and sharing the road with them. Firstly, the obvious: Trikes are wider, taller, and heavier (carrying up to 300 kg). This means that trikes would do more damage than a traditional bike in a collision with a pedestrian or another cyclist. However, Sandra explained that often it is necessary for trikes to use shared pedestrian pathways to get into buildings,

“On a bike you can kind of be on the crowd, but on a trike we need more space. But, sometimes [shared pathways are] the only option to get up to a building.”

Their size, and safety features such as braking and turning lights, make trikers feel more legitimate taking up a full lane of road than they would on a bicycle. But their maximum speed of 28 km/hour means that on some urban roads the bike lane is the safest and most practical place to be to avoid holding up car drivers, who will sometimes make dangerous maneuvers to get around a trike. Therefore, the geometric design of bike lanes within the city is important. In Vancouver, minimum bike lane widths that can accommodate trikes aren’t always used, and obvious left turning options aren’t always available. According to Sandra, intersections are a key area that can be improved,

“Sometimes being stuck in a protected lane prevents you from getting into an intersection to make a left turn.” 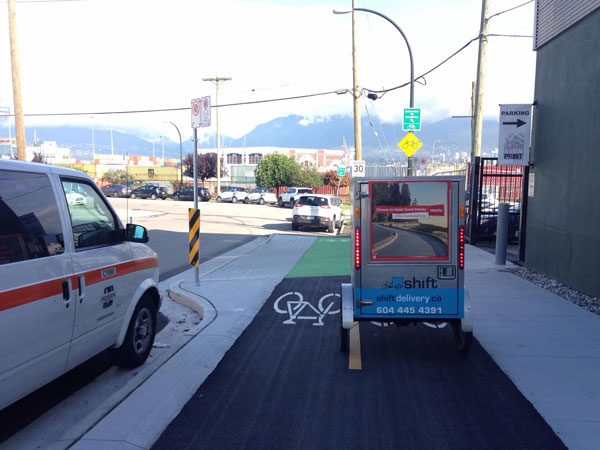 A cargo trike fills up the entire side of a bi-directional bicycle lane on a well-travelled route in Vancouver.

Making transportation infrastructure more inclusive to diverse city users will also have a positive impact for people riding trikes. Sandra suggested that the needs of trike users are often similar to people with disabilities, children, and seniors. For example, trikers often use accessibility buttons to open doors when they are carrying heavy packages. They also use the drop down curbs to move their trike on the sidewalk.

Future legislation may limit the bicycle lane to vehicles that require pedalling to move forward, explained Jeff Leigh from HUB Cycling. According to Jeff, there is a broader shift of mentality in bicycle planning to accommodate the thousands of commuter cyclists in Vancouver. “We used to think about bike lanes as a certain width so that the handles didn’t hit [the edge of the lane]. Now you have to consider overtaking. Now you’re looking at daily volumes. Lane widths are going to be governed by bicycle traffic flow.”

While Jeff doesn’t think that Shift’s professionally trained trikers are creating problems in the bike lanes, he foresees a future where the trikes are excluded from bicycle lanes due to their throttle mechanism.

In summary, there are a few things that designers and transportation professionals can do to incorporate a future with a growing number of delivery trikes.

If you’re interested in learning more, think about doing a ride-along with a trike courier. As Sandra put it,

“Getting to be out there on the bike routes and travelling around the city on wheels is fun!”

Sylvia Green (@yourcitymotion) is a Plangineer, active transportation researcher, and community organizer. She has worked on infrastructure, transportation, and research projects in Canada, the United States, and Norway.