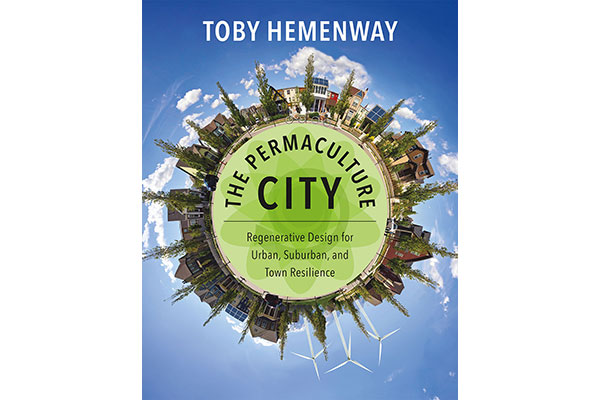 In the 1970s Australian biologist Bill Mollison and ecological designer David Holmgren were looking for a practical approach for agriculture. They were trying to find a solution to their question: Why is agriculture not planned around nature? Out of these efforts they published the book Permaculture in 1978 that has now become a movement on sustainable living by using the design principles of permaculture.

The term permaculture is derived from “permanent culture” and emerged in the 1960s as a field for solutions in agricultural systems for human settlements. It has come a long way since its initial years. There is now an eponymous documentary by Australian company Dogs Go Woof Productions featuring the founders/ initiators of Permaculture, the late Bill Mollison and David Holmgren.

Originally catered to the world of farming and gardening, permaculture upped the ante to urbanism as a whole—expanding to the realm of software design, community organization, water, waste and energy engineering, and even yoga. According to a  study by the United Nations as of 2018, over half of the global population (55%) lives in urban areas. This number is expected to increase to 68% by 2050.

Locally, as of 2020, Canada’s urban population is 30.670 Million and is projected to grow to 39.234 million by 2030. With the surge of urbanism, humans are facing growing challenges such as food security, housing, energy consumption, transportation, and healthcare. As such, new policy and planning guidelines for sustainable and inclusive urbanization are key to meet the demands of our century.

It is with this in mind that Toby Hemenway’s book, The Permaculture City, looks at the tools and outcomes of permaculture cities in North America with the aim to build resilient, livable, and inclusive societies.

On the first page of his introduction, Hemenway clarifies: “Urban permaculture is only slightly about gardening, and mostly about people, […] takes what we have learned in the garden and applies it to a much broader range of human experience.” (xi)

The first seven chapters of Hemenway’s book focus on the physical aspects of permaculture, such as strategies for gardens in a community, design techniques and strategies for the urban home garden, energy sources and water.

Food is a major theme throughout the book, which touches on a very timely and pertinent topic. The global and national statistics on food loss are grim: In 2011 a report by FAO suggested that 30% of the world’s food was wasted or lost.  In terms of economic value, around 14 % of food produced in the world is lost from post-harvest up to, but not including, the retail level.

In Canada, nearly 60 percent of the national food produced—amounting to 35.5 million metric tonnes—is lost and wasted annually. Of that, 32 percent—equalling 11.2 million metric tonnes of lost food—is avoidable and is edible food that could be redirected to support people in our communities. The total financial value of this potentially rescuable lost and wasted food is a staggering $49.46 billion.

With that in mind, in Chapter 1: The Surprisingly Green City, Hemenway asks whether food growing is “an essential function for cities?” noticing that cities have always relied on their surrounding regions for much of their food and other raw materials. Giving historical examples of prosperous countrysides in China and Göbekli Tepe, he suggests that urban food growing is a “bonus feature of a vibrant city.”

In the fifth chapter entitled Strategies for Gardening in Community, Hemenway explores the topic of food processing, distribution, and sourcing in-depth. He explains that “permaculture thinking can help us identify and regorge the weak links in how we obtain our food.” More particularly, he applies five “Foodshed Zones” to help meet our food needs.

The overall benefits of the foodshed zone system expand beyond the realm of food-sourcing. They also reduce one’s carbon footprint, allow for self self-sufficiency in food sourcing, and foster interaction and community. The latter is a topic dealt with in Chapter 9 “Placemaking and the Empowered Community“, where Hemenway examines the concepts of three key contributors to livable cities and placemaking: Jane Jacobs, Kevin Lynch and William Whyte.

Particularly William Whyte’s research in the 1960s and 1970s paved the way for understanding human interactions in public spaces, especially public plazas. Spread over two pages, Hemenway’s book lays out the Eleven Principles for Creating Great Communities, by Project for Public Spaces. The non-profit was founded in 1975 to conduct research on the impact of public spaces on people based on Whyte’s research. Today, the non-profit has expanded their projects and research on an international level, with project such as the Granville Island Public Market Expansion where the team looks into placemaking projects for Vancouver’s popular public market. The project suggests solutions for Granville Island to “stay relevant in the local food scene, and continue to be one of the most-visited destinations in the region.” This is why Chapter 9 is a must-read for anyone who is interested in understanding the importance of physical and mental space on building inclusive communities.
In Chapter 10: Tools for Designing Resilient Cities Hemenway explains Kevin Lynch’s concept of “legibility” that he defines as “the ability of a place to conjure up a clear image in an observer’s mind that allowed him or her to navigate, identify different districts and features, and feel safe and oriented.” The more clear and distinctive the experienced place is, the more it creates legibility. In his 1960s-research, Lynch concludes people have mental maps of experienced places that make them feel safe and happy. This user experience is the determining factor on whether cities perish or flourish. In other words, it is not so much the budget spent on spaces and buildings, but rather how these make people feel that creates meaningful communities grow and prosper.
One of the major achievements of The Permaculture City is that it offers solid and realistic solutions for cities. In doing so Hemenway gives solid examples and guidelines that encourage cities to think outside the box and develop a framework that will allow for sustainable and inclusive planning. Particularly helpful to lay readers, the book contains 16-pages of coloured images, where Hemenway graphically explains case studies such as indoor/outdoor worm bins, a private rain garden, profile tank and first-flush diverter, and a rocket mass heater, to name a few.
In the urban context, The Permaculture City is a timely and highly relevant guide that addresses the challenges of our generation. From layperson to professional, Hemenway’s book is for anyone who is interested in learning about how to green our urban landscape, how to live a sustainable, environmentally-conscious life as well as how to grow your own food in a world that is increasingly facing food insecurity.
***
For more information on The Permaculture City, visit the Chelsea Green Publishing website.
**
Ulduz Maschaykh is an art/urban historian with an interest in architecture, design and the impact of cities on people’s lives. Through her international studies in Bonn (Germany), Vancouver (Canada) and Auckland (New Zealand) she has gained a diverse and intercultural understanding of cultures and cities. She is the author of the book, “The Changing Image of Affordable Housing – Design, Gentrification and Community in Canada and Europe”.