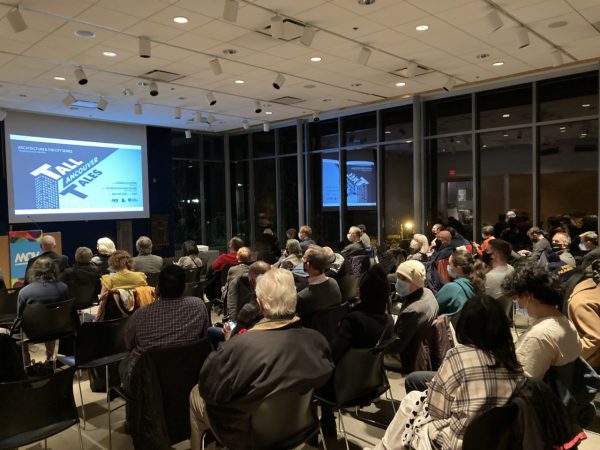 This past week, the Museum of Vancouver and the RAIC BC/Yukon put on its first talk in the new Architecture & the City Series, entitled Go Big or Go Home: How Vancouver Grew Up, with an inspiring historical account of Vancouver’s tall building history given by well-known heritage architect Donald Luxton. As part of the new Tall Vancouver Tales exhibition and speaker series, Donald’s talk also provides the primer for an upcoming exhibition at the MOV, set to open in February of next year.

Tall Vancouver Tales also coincided this year with other local happenings – including the Vancouver ADFF and AFBC Awards announcement – but was specifically timed to coincide with the annual conference of the CTBUH running from November 8-12. Due to the pandemic, this year saw several cities around the world hosting remote micro-conferences on the topic of how to address carbon, climate, and societal crises. Of the 18 cities participating, including Chicago, London, and Hong Kong, in person CTBUH events have been held locally rather than everyone gathering in one city as has been done in the past.

Here in Vancouver, sixty people came out for this inaugural Tall Vancouver Tales event at the MOV, a mix of architects, planners, heritage conservationists, and the general public – as well as CTBUH delegates – and as Donald pointed out in his opening remarks, it was nice to be speaking in person after close to two years of giving Zoom lectures.

Introduced by Sean Ruthen, the RAIC regional director for BC/Yukon and senior architect at James KM Cheng Architects, he thanked the MOV and host nations, the Squamish, Musqueam, and Tseleil-Waututh, before announcing the news of the collaboration between the RAIC and MOV for the speaker series and upcoming gallery exhibit at the museum, set to feature several current and upcoming Vancouver high-rises.

Intended as a catalyst for discussions about the role of the tall building typology to the general public, the tall towers to be featured include Shangri-La (Vancouver’s current tallest building), Vancouver House, Fifteen Fifteen, and the Alberni, as well as sustainable towers like Tallwood House at UBC. The museum also hopes to have the cooperation of Senakw as a key contributor to the exhibition.

The evening’s introduction also included a brief video address by CTBUH President Antony Wood, who thanked the participation in this year’s conference of all the host cities, including Vancouver, before giving a quick summary of the conference’s three topics: carbon, climate, and societal crisis, noting that the COP26 was also going on concurrently. He also remarked on the recent passing of the twenty year’s since 9/11, along with the struggles of the ongoing pandemic.

With final remarks about the Vancouver chapter of the CTBUH, with walking tour dates set to be announced, the host introduced Donald Luxton, noting his many years as a local heritage architect and collaborator in the Vancouver architecture community. Donald noted he would be speaking specifically about two Vancouver tall building landmarks – the Electra and Beach Towers – but first wanted to give them some context, including a brief history of tall buildings in the downtown peninsula.

As was to be expected, the evening’s talk wove a rich narrative of local history, consistent with the speaker’s exceptional book Building the West, from which he would’ve drawn much for the history of the building’s architects featured in his talk. Starting with the Electra, Donald gave the history of its time as the B.C. Electric Building, including a brief history of A.E. “Dal” Grauer, the president of the BC Electric Company at the time the building was designed and built.

Without a doubt, a highlight of the evening was its focus on Ned Pratt and Ron Thom, the two architects at Thompson Berwick and Pratt responsible for the building’s design, and included their collaboration with artist B.C. Binning, who did the building’s characteristic mosaic work. Donald took the opportunity to put up a picture of Richard Neutra sitting in the Binning living room, with Arthur Erickson and Ron Thom listening attentively to him, as a representation of how Vancouver’s design community was at the time tapped into modern design.

Donald’s talk also provided the opportunity to show several archival photos of the subject buildings, including one of the B.C. Electric Company in the 1950’s when it was still surrounded by single-family homes and one-storey shops. Particularly noteworthy in one night-shot was how the building’s interior lights were kept on all night, such that it became a glowing beacon in the landscape as the company thought was good advertising, something speaking to the thinking of that time.

Also discussed was the conversion of the building from office use to condo in the 1990’s by Merrick Architecture – Paul was an intern at Thompson Berwick Pratt when the Electra was first built – and how as a heritage architect Donald was part of the work to ensure its exterior envelope, needing to be upgraded and changed for residential use, remained more-or-less consistent with the building’s original elevation, something he believes was achieved in the end to everyone’s satisfaction.

The second part of Donald’s talk revolved around the character of C.B.K. Van Norman, who not only contributed to the booming single-family residential market in the 1960’s, but as a modernist he also was able to create several enigmatic buildings around the province that still exist today, including the Revelstoke town hall which stands as an austere expression of mid-century modernism, and continues to mystify the sleepy ski town’s residents to this day.

As the architect called to design the three original towers along Beach Avenue and looking out at English Bay (the fourth was added a few years later), this was a relatively new building typology for Van Norman in Vancouver at the time, and unbeknownst to him it would become in many ways the prototype for the podium-tower in Vancouver.

All in all, Donald’s talk provided for the perfect kick-off to this exciting new speaker series, which itself will complement the upcoming tall building exhibition in the MOV, with the announcement of the next event in the Architecture and the City Series to be made shortly. 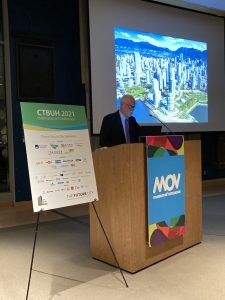