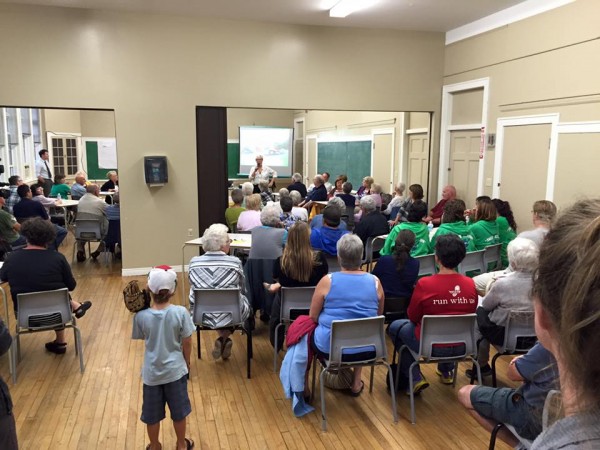 Dartmouth – On Tuesday night at Halifax’s Community Facilities Master Plan (CFMP) consultation, in front of around 100 concerned residents, Dartmouth councillor Gloria McCluskey said unequivocally that the Findlay Community Centre won’t be closing. Municipal recreation staff added in their presentation that the CFMP isn’t about specific closures. If it had been left at that, there would only be reason to celebrate the good news.

Unfortunately, McCluskey chastised the residents who had mobilized to protect the Findlay Centre, both at the meeting and in the media. She accused them, and me, of being irresponsible and spreading false information about a potential threat to the Findlay. The insinuation was that everyone who attended the meeting to protect the Findlay had wasted their time. It was a harsh message to give to residents who were simply trying to preserve a valued community centre in their neighbourhood. It was also not a fair characterization of events and only feeds into a tendency in Dartmouth to discourage public participation in political decisions.

Was there Reason to Worry about the Findlay Centre?

McCluskey contends that there was never any danger that the Findlay could close. She relies on the 2014 council motion that dealt with the expansion of the Dartmouth Sportsplex to reach that conclusion. Prior to passing the motion, Council amended it to delete the staff recommendation to close the Findlay. McCluskey’s interpretation seems to be that the amended motion ended the matter and meant a long-term decision had been made not to close the Findlay.

A concerned group of Hawthorne Street residents, however, interpreted the facts very differently. Here is why they were concerned:

Based on these facts, the Hawthorne residents concluded that the new CFMP was likely to address closures and, because staff recommended closing the Findlay in 2014, it was a strong possibility that the centre could once again be threatened.

Instead of a passive “wait and see” approach, the Hawthorne residents decided to be proactive and ensure the City understood the importance of the Findlay Centre to Downtown Dartmouth. By doing so, they hoped to avoid any future closure recommendations in the CFMP. Rather than fight to reverse a bad decision in the CFMP, they wanted stop it from being made in the first place.

When a public engagement meeting was announced for September 28 at the Findlay to discuss the CFMP, the Hawthorne residents decided that the best approach was to mobilize fans of the Findlay and deliver a clear message to the City that Dartmouth’s priority was to keep it open. Here are the steps they took to ensure concerned residents showed up at the meeting:

Everything stated in the flyer and my article is factually accurate. See the flyer here and my article here. They are of course presented with the interpretation of the facts that there could be a threat to the Findlay, but the facts are still the facts and it was reasonable to reach that conclusion based on them.

Both during Tuesday’s meeting and in media interviews afterwards, Councillor McCluskey lambasted the efforts of the Hawthorne residents as “irresponsible” and accused them of spreading false information.

What kind of message does that send? Is mobilizing a community to protect a treasured institution from potential closure irresponsible? Is doing their own analysis of the risk and acting accordingly irresponsible? What misinformation did they share?

In my view, the Hawthorne residents demonstrated intelligence, strategic thinking and forethought. They epitomize responsible, caring and engaged citizens, the very kind that a democratic society requires. I’m very impressed by their efforts and what they achieved and I stand by my own contribution.

It’s divisive and hurtful for Councillor McCluskey to call their efforts irresponsible and publicly accuse them, in front of their peers, of spreading misinformation. Engagement and participation is held out as an ideal and desirable thing, but in this instance, it wasn’t only unwelcome, it was actively and publicly derided. Are regular Dartmouthians likely to get involved and engage in the municipal process in an environment where a difference of opinion gets them publicly scolded by an authority figure? It doesn’t seem likely.

I think it’s part of a wider public participation problem; a lingering tendency from a more technocratic era in which public engagement and community voices weren’t valued. Take the Canal Greenway Park as a recent example. There was a consultation process to establish a vision for the Park, but the plan has since been significantly modified, leaving only fragments of the original concept. Despite the new plan having been released more than a year ago, there has still been no public engagement by the municipality to discuss the changes or the rationale.

The positive part of all of this is that, in my view, the Hawthorne residents have achieved their goal of minimizing any threat the CFMP might pose to the Findlay Centre.

McCluskey’s public promise that the Findlay will stay open, combined with the large turnout on Tuesday and municipal staff’s statement that the process is not about specific closures (an apparent change from what was suggested in the FAQ), creates a political climate that would now make it very difficult for the CFMP to include a recommendation that would close the Findlay. If the Findlay was in any potential danger from the CFMP process, as I believe it was, than Dartmouth owes the residents of Hawthorne Street a big thank you for taking on the task of mobilizing the community.

Even if, in the alternative, there was no threat, what was actually lost? A few hours of people’s time to publicly record their support for a beloved community centre? Even after McCluskey stated that the Findlay Centre would not be closing, a large majority of the 100 or so people who came to the meeting stayed to participate in the CFMP discussion and help shape the future of Dartmouth’s facilities. A lot of interesting and valuable feedback was given. No one’s time was wasted. An active and engaged citizenry who are happy to tell decision makers what is important to them and help identify solutions to problems is exactly what all councillors should want for their districts and that’s what was on display at the Findlay Centre on Tuesday night. Responsible and informed citizens seeking to participate in the democratic process to shape their community.

A draft version of the CFMP is planned for the spring so stay tuned.