Native oak and birch trees shade out the harsh noonday sun. Squirrels forage for acorns amongst the serviceberry bushes and wildflowers. The sound of singing birds fills the air. Yet this is not Algonquin Park or the Bruce Peninsula, but rather the courtyard of a building in downtown Toronto.

Walk through one of the three passageways piercing the unexceptional exterior of the University of Toronto's Earth Sciences Centre, and you will find yourself within a beautiful forest-like setting. When the building was constructed in 1989, it was decided to plant a small woodlot of native trees and plants within its two open-air courtyards.

The northern courtyard includes trees and shrubs that can be found in the boreal forests that cover much of northern Ontario. The plantings in the southern courtyard are intended to represent a Carolinian forest, which can be found in the southernmost parts of Ontario. The plantings were designed by Michael Hough and are now maintained by faculty and students of the Department of Forestry. 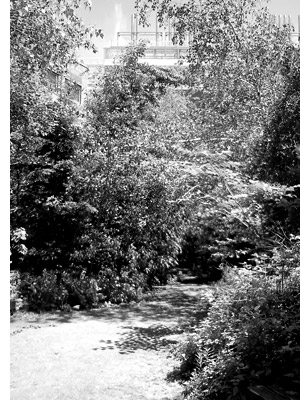 The courtyards mark the first time at U of T that a building's surrounding landscape was designed to reflect and complement the subjects being taught within its walls, in this case forestry, botany and geology. The constant chirping of birds in the trees and voices of students who have ducked into the courtyards for a quick break from their classes attest to the success of the initiative. John McCarron, the coordinator of technical services at the building, fondly recollects the story of two cardinals who last spring mated in the northern courtyard and then proceeded to teach their young chicks to fly while students and professors looked on with interest from the many surrounding classrooms and offices.

The woodlot is an example of how, with some imagination, we can create and cultivate a close, healthy relationship with nature within an urban setting.