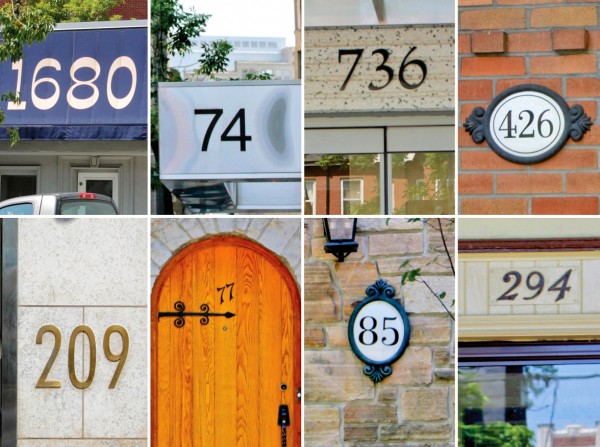 You can tell a lot about a building by its number. Depending on what city you’re in, a street address can indicate distance from a body of water or major street, proximity to the nearest arterial, or which side of the road you’re on. Canadian cities all have their own systems for assigning numbers. Here are details on how the systems work in Vancouver, Calgary, Montréal, and Toronto.

How does it work?

Laid out in grid patterns, these four cities all have an intersection that represents zero, and numbers increase upward and outward from there. Vancouver’s is Ontario/ Carrall Street and Dundas Street. Calgary’s is Centre Street and Memorial Drive, Montréal’s is St. Laurent Boulevard and the St. Lawrence River, and Toronto’s is Yonge Street and Lake Ontario.

Vancouver, Montréal, and Calgary are all similar in that each city block is assigned 100 numbers — so the first buildings on the block will have a number ending in “01” (or close to it), ascending to “99.” The digits in front of that indicate how many blocks each block is from the centre. In Calgary, where streets are numerically named, it’s even easier; the first digits represent the street the building is closest to. So, a building numbered 3420 is number 20 on the block and closest to 34th Street. This means that a street that runs east–west through Centre Street will have virtually the same numbering as any street running parallel to it.

In Toronto, on the other hand, building numbers usually increase by two regardless of which block they’re on, so one block may have buildings numbered 384 and 402 on it.

Who assigns an address?

In Calgary, the City’s addressing officer is the one in charge of assigning new building numbers. In Vancouver, that job belongs to the chief building official. In Toronto, Wally Kowalenko is the city surveyor and director of the survey and mapping department. He says Toronto’s numbering breaks down in a few areas because the city is a collection of amalgamated cities. “There were a number of inconsistencies,” he explains, “and we couldn’t very well undo them, so we just live with the inconsistencies as best we can. I like to think we have relatively consistent policies now in place.”

Montréal is divided into 19 boroughs, and each has its own numbering bylaw and permit officers to issue them. Sylvain Daoust, permit officer in the borough of Ville-Marie, says although each borough has the power to do something different, not many do. “Most of the boroughs in Montréal have the same bylaw or numbering, which is quite simple.”

What if you want to change your building’s number?

Some numbers have deep significance in certain cultures, which can impact the resale value of a property. As a result, sometimes an owner will seek to change a building’s number.

In Calgary, you must pay $735 to the city for one address number change. If you are changing multiple addresses, the charge is a $735 base fee and then $86 per additional address.

In Vancouver, like other cities, you must be the registered property owner to request a number change. The cost is $690.

In Montréal, you don’t have the option of changing your number. Because numbers are assigned according to where your door is located in relation to the other doors on the street, changing one would mean changing all of them. The exception would be a building with a wide façade, such as an office building. In a case where a door position moves significantly, or a new one is added, a number can be assigned, which costs $56.50 plus taxes. If a number is removed in this case, it cannot be used again. It exists and will be attached to that building, whether it is used or not.

In Toronto, if the owner of a property wishes to change the address of a building, they have to pay $300, and then $29 for each additional address.