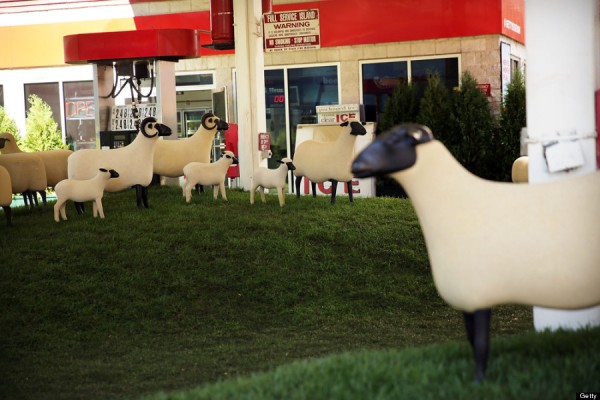 If you happened to be in New York’s Chelsea gallery district recently, you may have seen a strange sight. But before you go and get your eyes checked, it will be good to know that you were in fact seeing sheep, or at least sculpted pieces of epoxy, stone, and bronze in the likeness of sheep, invading a local gas station.

The latest installation from French artist François-Xavier Lalanne, Sheep Station is a part of the Michael Shvo and Paul Kasmin Gallery’s Getty Station program, a project aimed at re-envisioning the space of a former Chelsea gas station now slated to become home to a collect of luxury residences, but which will also incorporate the public art project into its design.

Bordering on the surreal, the installation brings a pastoral square of green “grass” and collection of “muttons” to the urban industrial area around New York City’s recent adaptive re-use project The High Line. But perhaps the most absurd of all is the white picket fence which lines the site.

Now that is something you don’t see everyday in New York City.