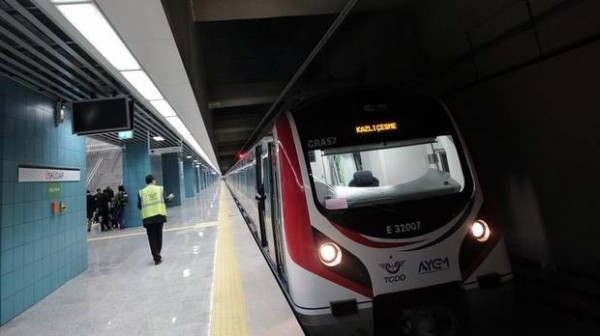 While you will not actually need to use your passport when boarding, Istanbul’s new underwater rail line, the first of its kind, now connects Europe with Asia via a submerged tunnel under the Bosphorus Strait. Opened October 29, the tunnel will allow for easier transit commutes within the city, whose main city centre lies in Europe, while a third of its territory is in fact in Asia, and starts to fulfill the “pharaonic”-like goals of Prime Minister Tayyip Erdogan.

But while this advanced transit project is impressive in its capabilities, there have been concerns with Erdogan’s grandiose dreams for Turkey’s largest city, as well as the historical and environmental impact that his desire for a built legacy may leave. With more than a million trees already felled, as well as historic underwater ruins and sites displaced, there are also concerns that the tunnel has been built within a short distance of the North Anatolian Fault line, making earthquake activity highly likely.

Yet there are little signs of Erdogan slowing his city-building dreams with a 50-kilometer canal, airport and grand mosque also slated for construction under his government. It will, therefore, be interesting to see if Istanbul will be able to find the sweet spot between progress and conservation, before it is too late.

Image courtesy of The Globe and Mail