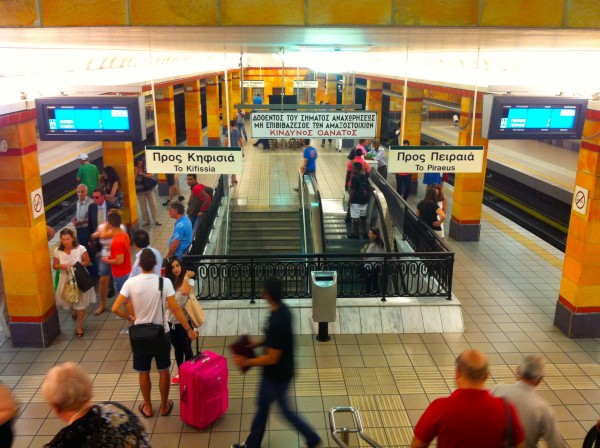 I recently visited the Athens metro. Athens expanded its metro dramatically for the 2004 Olympic Games, especially in the central city. The new system incorporated an existing 1896 line, which gives some of its stations a 19th century flavour. Many of the newer stations serve as mini-museums for the fascinating artefacts dug up in constructing the subway. The system is now cheap, efficient, and takes tourists where they want to go, while reducing road congestion.

In the last 30 years of the 20th century, car traffic in Athens increased by 2000%. The increase in car use led to a 26% increase in travel times within the city.  For the sake of the city – and the 2004 Olympics – Athens set about an ambitious metro expansion plan in the 1990s. By the opening ceremonies for the 2004 Olympics, 27 km of track with 28 stations had been built for a cost of 3.4 billion dollars. 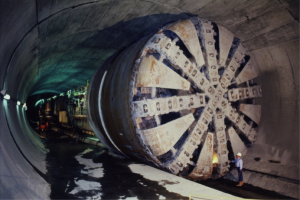 Athens Line 1 was opened in 1869, with steam trains providing a better connection from Athens to the Port of Piraeus than the competing donkey carts. Line 1 runs mostly above ground; until the recent expansion it was referred to as “Ilektrikos” or The Electric. It has been extended and upgraded numerous times, notably moving underground in the city centre after World War II. Line 1 is now seamlessly integrated with the modern lines 2 and 3.  The entire Athens metro is a mix of old and new. 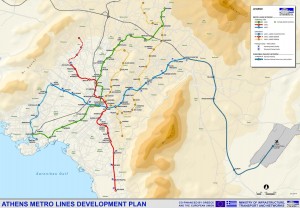 The metro is cheap, €1.40 for 1.5 hours of travel, and modern, full of high tech ticket machines, and clear wayfinding. The modern stations of lines 2 and 3 are functional, mainly grey and white granite and marble, and spotless.  They’re useful for getting around but not particularly exciting. Line 1 was the most fun. 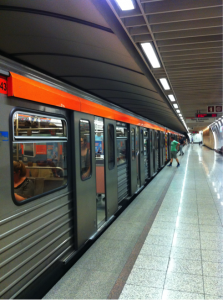 Most of the old stations are distinct from each other and the trains are covered in graffiti.  After the responsible grey of the newer lines, the bright orange tiles at Omonia Station are a surprise, and the soaring glass ceiling at Piraeus Station is worth the 30-minute ride from the centre of town. Piraeus has been the terminus of Line 1 since its opening; the current building dates to 1929 and is reminiscent of Victorian train stations in British beach towns. The station is a short walk to the port for those on their way to Cyclades, and contains the Electric Railways museum. 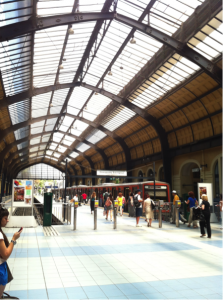 The best part of the modern stations  is their displays of artefacts from the excavations. The new lines were purposely built deep to limit the archaeological challenges. However, at every station the construction had to come to the surface, interacting with Athens’s buried history on the way. The metro excavation doubled as an enormous archaeological dig unearthing more than 30,000 historical objects. The care taken during construction slowed down the project, made it more expensive, and even necessitated route changes. For example, plans for Kerameikos Station, just outside the historic city walls northwest of the Acropolis, had to be abandoned after an archaeological appeal to the European Commission in Brussels.

Today, some of what was found is on display in the stations.  Syntagma Station has one of the larger displays. One entire wall of the upper concourse (outside the paid area, and behind glass) is a cross section of the actual excavation. The highlights, clearly labelled in Greek and English, include a 5th Century BCE Aqueduct and 4th Century BCE grave, still containing the original bones. Across from the mosaics and ancient columns is a delightfully located cheese shop, for those who need stamina to take in all the history. 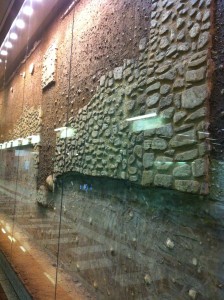 The best example of old and new is found at Monastiraki Station, an interchange station between Lines 1 and 3. The Line 3 construction revealed remnants of settlements stretching back to the 8th century BCE. The excavation is part of the hallway between the two lines and includes the ancient bed of the Eridanos River, complete with moving water. The old Line 1 station is the last before the route drops underground; it’s worth stopping here for a close up view of the graffitied trains. 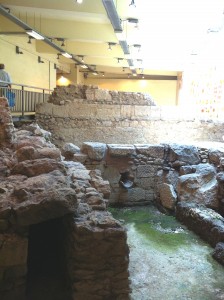 A glimpse into history, Monastiraki Station 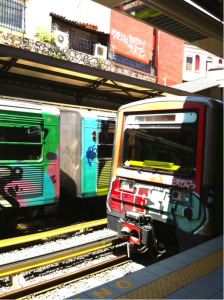 The metro successfully attracted riders off the roads. Most users came from buses (54%) but nearly a quarter of the new riders came from cars. Accordingly, the metro helped reduce car traffic in Athens, at least in the area it served.  The local friends I was visiting tell me that they don’t use the metro very much as it doesn’t go to the places they live. The Attika Metro S.A. Continues to expand the system which may alleviate this in the future; in the meantime, as a tourist, it took me everywhere I needed to go.

Shoshanna Saxe is an engineer and curious about all things subway. Say hello on twitter @shoshannasaxe