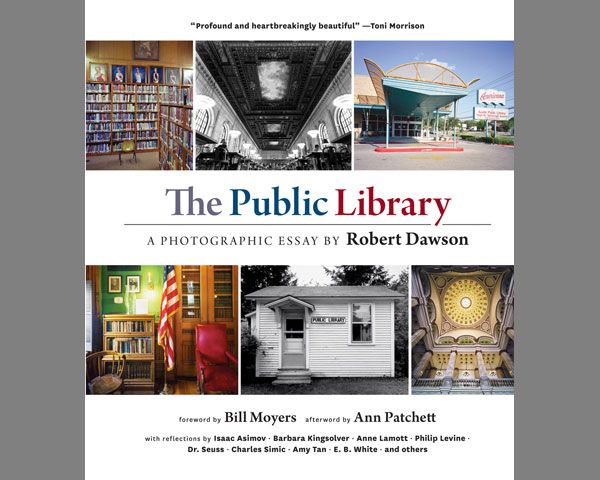 It is rare to find a book where the first sentence powerfully sets the tone to for the rest of the book. Yet, acclaimed Robert Dawson could not have chosen a more fitting start to his book The Public Library: A Photographic Essay than choosing T.S. Eliot’s:

The very existence of libraries affords the best evidence that we may yet have for the future of man.

Admittedly, I am biased. I have fond memories of the public library. It has played a significant role in my life and continues to do so presently. Judging from the crowds at my local library during my weekly jaunts, by no means am I alone. Public libraries are vitally important to the workings of all communities – not only as repositories of past knowledge and civic memory, but also, in the words of Seattle Public Library designer Joshua Prince-Ramus, as “the last vestige of public free space” –

Yet, while many are flourishing during this time of digital media, others are under threat. And it was this diversity that photographer Robert Dawson captures so well in The Public Library. The result of an eighteen-year period, the book powerfully captures an amazing variety of the 17,000 public libraries in the United States. In his word ”some of the poorest and wealthiest, oldest and newest, most crowded and most isolated, even abandoned, libraries.”

As with all photography books, the images within dominate the content. That being said, the organization of The Public Library does well to highlight the range of issues in and around these institutions. More specifically, the book has seven main chapters that touch upon different themes – The American Public Library, Economics, Civic Memory and Identity, Urban And Rural Libraries, Art and Architecture, Evolving Libraries, and Literature and Learning – with each photograph (and succinct captions) thoughtfully chosen to speak to each subject matter.

Each chapter begins with a short, personal description by Dawson describing relevant issues around the theme, followed by the photographs. Typically concluding each chapter is an essay – or a number of essays – from a number of great contributors, ranging from Pulitzer-Prize winners Charles Simic and Philip Levine, to Ann Lamott and Amy Tan. Bill Moyers’ foreword and Ann Patchett’s afterword bookend this impressive book.

Although the content is America-specific, the result is a stunning, and often somber, visual reflection on public libraries, as a whole – worthy of Toni Morrison’s praise as “ an irrefutable argument for the preservation of public libraries…..profound and heartbreakingly beautiful.”

For more information on The Public Library: A Photographic Essay visit the PAP website.