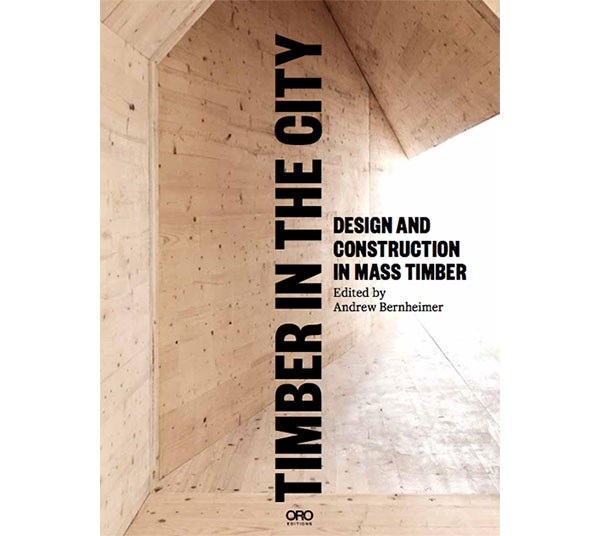 About two and a half years ago I had the opportunity in my last year of University to do an internship with Michael Green Architecture (MGA). This was right around the time that Michael was getting ready to give his TED Talk on the future of “Tall Wood” – a talk that formed the basis of Timber in the City: Design and Construction in Mass Timber.

Michael has been on the forefront of implementing CLT (cross-laminated timber) in our local architectural lexicon and, based on the work showcased in Timber in the City, the results are beautiful, intriguing, and inspiring. It is clear throughout the book that others have heard the message MGA put forward and have taken the technology in several different directions with stunning results. Andrew Bernheimer does a masterful job at editing this book, which beautifully and artfully illustrate the importance of Mass Timber Construction in our future work in the design and architectural spectrum.

The book begins with a preface by Andrew and then moves into two essays which highlight the technology behind Mass Timber and the shockingly positive impact it can have on our environment. For instance, in the first essay by Alan Organschi titled “Timber City: Architectural Speculations in a Black Market, readers are introduced to a material by its components and capabilities: “a complex carbohydrate, synthesized biologically using solar energy and carbon dioxide, with an exceptional high strength-to-weight ratio.”

Reading the above would likely elicit thinking of a new technological breakthrough with some composite material, but knowing the context of the book, we realize he is talking about timber. And what is fascinating about this, is just how unreal the whole prospect is. “A single capsule, costing nothing to produce or to distribute, is usually a little less than a centimetre in length and, depending on atmospheric, hydrologic, and soil conditions, can generate more than a metric ton of structural material in a little over 50 years. The supply is potentially infinite…”

Hearing a pitch like this without the context, one would be chomping at the bit to invest. The problem lies in our standards and codes, and in simple familiarity. In the North American context, steel and concrete have been the “go to” building materials of the several decades and changing peoples perspective seems to be the biggest hurdle that Tall Wood faces.

Is your first thought when you think of a skyscraper built out of wood seeing it engulfed in flames? It certainly was mine. But Andrew Waugh addresses this in the second essay, Twenty-First-Century Timber, succinctly stating that solid timber “meets and generally exceeds fire requirements. A steel frame might buckle after an hour; a solid timber structure forms a protective char layer on the surface and retains its structural integrity over greater lengths of time.”

Waugh also goes through different projects that his firm has worked on using Mass Timber and discusses the properties and elements behind each project and its amazing benefits. To put things in perspective, the Co2 emissions from a steel beam at 20’ are 1811.9 pounds. The emissions from an 8”x16”x20’ beam of concrete are 3066.7 lbs. Compare that with an 8”x24”x20’ CLT beam having emissions of only 501.6—almost six times less than the equivalent beam of concrete—and one truly starts to see what an amazing material it can be for our built environment.

The next section of the book focuses on the design competition which ultimately gave the book its name—Timber in the City. It was a way to see how students and emerging professionals would engage a troublesome area in Red Hook, Brooklyn—chosen because it is an area that faced immense challenges after Hurricane Sandy and can large fluctuations in water rise—through the use of timber.

The winning project came out of the University of Oregon, and combined private living, with industrial and commercial zoning. The concept revolved around using the manufacturing use at the bottom of the structure to create the pieces needed to put together the rest of the tower, keeping most of the construction prefabrication on-site. The buildings would then just rise as they were built within their own little context.

One of the things Timber in the City does best as a book is give readers the requisite information about the projects and then let imagery, floor plans, schematic diagrams, and renderings tell the story. The book began with the facts, but throughout one isn’t inundated with a heavy dose of propaganda. We are allowed to see for ourselves the impact that Mass Timber could have on a local community, a city, and the world over. That being said, prefabrication was a running theme throughout all the contestants that were shown, as CLT is easily configurable and can allow for many creative applications.

Interesting projects created by different firms across the globe who are currently working on our have completed Mass Timber buildings, close the book. Although we still see standard concrete and steel materials being implemented in a few instances, it feels more like this is a required stepping stone to making a shift to Mass Timber. The works feature a multi-family building in Germany, an office building in Switzerland, a high school in Connecticut, MGA’s Wood Innovation Design Centre here in BC, and the Bullitt Centre in Seattle, which is “the first urban mid-rise commercial structure in the United States to target the goals of the Living Building Challenge…”

Over and above the beautiful imagery that highlights the usage of Mass Timber both inside and out, the book also features a strong technical side, with cross-sections and details shown of ceilings, walls, even the creation of structural columns which in some applications have a truly unique design. With this technical information on hand, it was easier to appreciate the projects as a whole—seeing beyond its superficial beauty to understand its function.

I was very lucky to have had my internship when I did, and to get the chance to befriend with Michael Green. Naturally, while I was there, I learned a lot about the future of Mass Timber in our urban environments. This being the case, it was and still is difficult to hear about the politics behind what is holding back something that could drive such positive change in our world.

Timber in the City: Design and Construction in Mass Timber was inspiring from the minute I looked at the cover. Every aspect of the book is meticulously edited by Andrew Bernheimer and the intelligent people who contributed to it offer fascinating arguments regarding Mass Timber that I wish more people had access to.

This book, and the contest that spurred its creation, may very well be the turning point in a rapidly increasing conversation about the implementation of Tall Wood. It is another step laid for those in the industry to take notice, and continue in the footsteps of these great innovators who are pushing the ways of thinking about our built environments.

For more information on Timber in the City, visit the ORO Editions website.