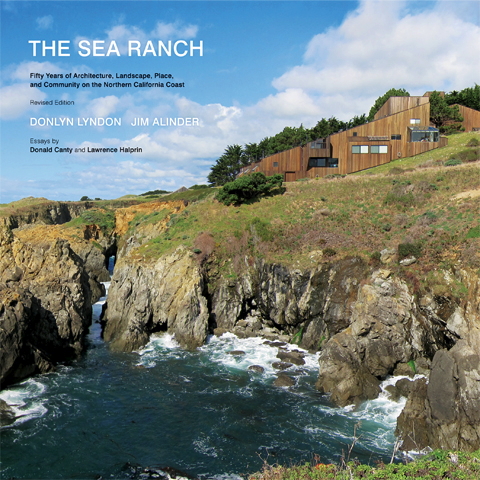 One hundred miles north of San Francisco, the Sonoma County coast meets the Pacific Ocean in a magnificent display of nature. This is the location of Sea Ranch, an area covering several thousand acres of large, open meadows and forested natural settings interspersed with award winning architecture. The ecologically inspired plan drawn up for the Sea Ranch in the mid-1960s caused a quiet revolution in architecture. This revised and updated edition of the now classic monograph, the only one on The Sea Ranch, contains fourteen additional projects and an updated account of the ongoing development process and land management issues.

With the current state of the world being what it is, it now may be more than just a romantic notion to return to a more pastoral and idyllic way of life, one in which our connection to the natural world trumps daily tweets along with other useless digital confectioneries. Fifty years ago, with our neighbours to the south embroiled in the Vietnam War and while Jane Jacobs was lamenting the death of the American city, a group of discontented architects and landscape architects travelled up the California coastline to find a place to start over: to try their own hands at realizing a more simple way of living, with the goal of treading more lightly on the earth.

The community and architecture that resulted from this endeavour is now well known, and as captured in this second edition of the monograph on this place, Sea Ranch continues to be a marvel today. Especially so in a world where other attempts have either failed miserably or not even tried to improve upon the abysmal car dependent suburb, or where our society’s growing income inequality has allowed wealthy individuals to build their own private gated estates by the sea, failing to engage meaningfully with its surrounding context…and missing the lesson of Sea Ranch entirely.

In this updated edition to the original 2004 monograph of the same name, The Sea Ranch – Fifty Years of Architecture, Landscape, Place, and Community on the Northern California Coast is a sumptuous volume.  Hard bound and with large format colour photography, one is first invited to view panoramic photos of the setting taken by Jim Alinder, who captures the majesty of Sea Ranch’s breathtaking environs of sea, meadows, forest, and sky. Only once the book has introduced the importance of this landscape is the way clear to look at the remarkable architecture that has resulted from its mixture.

The projects featured in the book are too numerous to enumerate, given that some are collections of houses while others are entire complexes, like Condominium One—the oft photographed representative for all of Sea Ranch. Suffice to say that the 300 page book represents a significant cross-section of the community, with essays contributed by some of the group’s founding members. To read The Sea Ranch is then to come to appreciate this rich and wonderful legacy that the original founders gave to this community, and to all of us a lesson in how to build a more sustainable and civil society.

In fact, since the first lots were staked out fifty years ago there are now entirely new neighbourhoods that have been built, all with the same purpose to have as small an ecological footprint as possible. And while materials have been allowed to be updated in the newer houses—double-glazed aluminum windows, vented soffits, etc.—the overall aesthetic has been preserved such that all the houses featured in the book are united in their philosophy to celebrate wood as a vernacular material expression simultaneous with the spectacle of the natural surroundings.

Broken into chapters by the way the houses find themselves in relationship to their building sites—Houses that Connect, Houses that Enfold, Houses that Settle—the projects are all studies in creating from a tabula rasa, each taking their cue in their own unique way in response to its magnificent context. The book opens with a quick history of Sea Ranch, along with the first few buildings built on the site, Condominium One and the Hedgerow Houses, along with the new settlement’s first athletic centre, which in plan is a study in theatrical restraint as the change rooms and pool play out like a pageant for the surrounding trees and meadows.

The book is grounded, along with Jim Alinder’s photography, by the wonderful drawings from the hand of landscape architect Lawrence Halprin, whose playful sketches portray a whimsy in the early planning of Sea Ranch, something sorely missing from the all too serious bureaucracy that our municipal planning departments have presently become. Halprin sadly passed away in 2005, but his contributions to the book are integral, being as he was one of the founding members, and a lifetime member of the Sea Ranch Association, the organization which oversees the community.

The book closes with one of his final musings on the community, written for the 2004 publication of The Sea Ranch, during the time when he and his wife Anna were rebuilding their original home in the community, and recalling the early days: “Our first few years at The Sea Ranch were wonderful. The house and its outdoor places enhanced our lives and released our creative juices. Anna and I both perceive nature’s processes as an inspiration and mentor rather then as a picturesque backdrop; and this place, embodying our mutual desire for interaction with nature, became a great resource for us and for our students.”

These remarkable homes along the northern California coastline are not unlike the Prairie Houses in the American Midwest, a regional expression of a rich and inspiring landscape, made as much as a statement of how to live simpler in our world as any intent to create a unique architectural expression, though this has certainly been the outcome. This book is then to be treasured for its depiction of this regional modernism and how it provides for a more layered sense of community: how as architects and designers we can provide for social sustainability at the same time we look to decrease our ecological footprint.