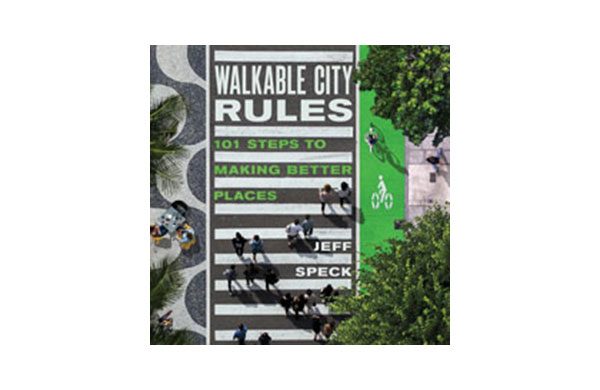 When I reviewed Walkable City, the precursor to this book by Jeff Speck in 2013, I was in a much different place in my life. Living at the edge of transit, I was able to walk anywhere I needed, took the Skytrain daily to work or other appointments. I was an avid walker, and would do everything I could to walk wherever I needed, whenever possible. Fast forward six years (which in it of itself is a head spinning realization) and I now live on the vast outreaches of suburbia, where only those with a car survive. The commute time via transit from my home is a whopping two hours and thirty-seven minutes one way, and I now have a three year old, with another on the way. I can’t lose five hours of my day with them and my wife; it just isn’t feasible. I was lucky enough that I was able to purchase an electric car, to assuage some of my guilt, but I even felt it in my health and my weight as the step count started dwindling.

Luckily, at around exactly this moment, I was presented with the opportunity to review Speck’s newest book, Walkable City Rules: 101 Steps to Making Better Places, and it fits as a perfect successor to what was one of my all-time favorite books on urbanism. In Walkable City Rules, Speck has broken the book out into an admittedly arbitrary 101 steps spread across nineteen chapters. Each chapter selects a different urban planning issue and, within each issue, Speck highlights five more detailed aspects to focus on.

The book reads like a manual, and in fact, one of the constant comments Speck received after Walkable City was released, was that it would be easier for individuals and planners to have a source guide they could use to accompany them into committee meetings to prove their points. In Walkable City, the information was in anecdotal form, which was why it was easy to digest. What Speck has done with Rules is added that next step, where the layout and subject depth allow for real change to take place. He lays the roadmap and provides the tools for intrepid individuals to seek out their local planners and try to make an impact in their community.

There are sections such as Sell Walkability, Get The Parking Right, Let Transit Work, Make Sidewalks Right, and Start with Safety to name but a select few, and each one is no more than two pages of content. This allows the reader to get to the heart of the matter. Further to that, each item is numbered.  For instance, in the section Make Sidewalks Right, item 78 is Put Street Trees Almost Everywhere. This then leads to a two page spread on the value of protecting sidewalks with trees and the efficacy of doing so…..or not doing so as in the case on Orlando’s Colonial Drive where he states “compared [to] a segment of roadway with street trees and other vertical objects along it…the segment with no trees experienced 45% more injurious crashes and many more fatal crashes: six vs. zero”. He not only speaks to safety, but also to ecological and financial reasons for each rule, and it is this breadth of topic that allows almost anyone to use items no matter the pushback or argument.

There were certain sections of the book that even I took issue with. At times, Speck was able to sway me and others he wasn’t; the point being that he doesn’t need to convince everyone on everything. At the end of the day, there is more than enough ammunition for the engaged individual to make a case for almost any urban planning change one would like to see.

One often hears that starting a family changes one’s perspectives. This held true for my wife and I. We chose the location we did for the schools, both of which are walking distance for our children (elementary and high school). There are ample studies (including in this very book) about how walking to school positively affects a child’s health and mental wellbeing. However, as mentioned earlier, not all is positive. My wife and I have already planned a trip to council to discuss a number of challenging issues also referred to by Speck. For example, the street design promotes speeding despite the limits posted, there are no crosswalks in the immediate area (pedestrian controlled or otherwise), and there are no sidewalks on our side of the road. All of these items combined add up to a terrifying vision of our kids crossing the streets to get to school daily without any of these basic features.

But with Speck’s book in hand, we’ll sit down at our council meeting, we’ll meet with the planners and discuss what needs to happen. This is how change works, after all…..and this is what Speck is driving at. Walkable City Rules is meant to be solid guidebook for those interested in increasing the safety and ecological working of our streets, the financial bottom line of our cities budgets, and the health of its citizens. Speck has done all the above and more, and we are lucky to have him as our urban champion.