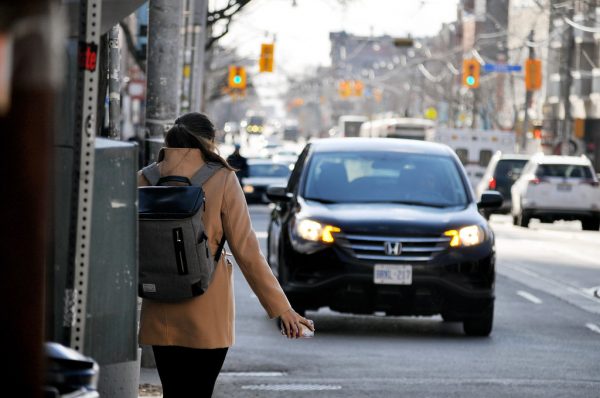 With British Columbia rolling out its ride-hailing regulations in August, Toronto City Council re-examining its bylaws,  and Halifax looking to do the same, it seems like a good time to dive in on what we do and don’t know about ride-hailing in our cities. Part one of two pieces by Nick Sanderson exploring these issues. Part 2 can be found here.

Since Uber gained its Toronto license in September 2016 (joined by Lyft in late 2017) ridership on the two ride-hailing services has almost tripled, according to a report by the City of Toronto.

The greatest absolute number of trips are in the downtown area — 93,550 on an average business day — which makes up nearly two-thirds of the city-wide total. This might seem obvious. Downtown is dense and it’s where most of the city’s cultural and business life happens. But it’s also the most walkable part of the city and where transit is most readily available.

That such a large share of the rides take place downtown is reflected in a University of Toronto survey, which found nearly half (49%) of their respondents would have taken public transit in the absence of ride-hailing for their most recent trip.

Fewer riders would have taken a taxi (33%). While the remainder “would have driven, been driven by someone, walked, biked, or would have not made the trip at all.”

There is, of course, a note of caution in this survey. It doesn’t represent the actual picture in a world without Uber/Lyft, only what people say they might do in that world.

But it does, however, seem in line with another study of Uber in the U.S. led by University of Toronto’s Prof. Jonathan Hall, that “Uber seems to be decreasing ridership on larger [transit] systems,” relative to the U.S. average (which you can imagine is very small). The TTC site proudly boasts it “has the third largest ridership in North America, after Mexico City and New York City — cities with populations greater than eight million people.” So Toronto, like New York, is particularly vulnerable to losing riders and fares when a convenient alternative comes along and people are willing to pay for it.

The downtown core is also the place of work for the wealthiest in the city. A study from two Toronto academics found over half of ride-hailers came from households with annual earnings over $100,000, in line with Bruce Schaller’s findings that the vast majority of ride-hailing trips in nine U.S. metro areas are taken by people with household incomes of US$200,000. This again is suggestive of a luxury service.

How efficient is it?

This demand can only be served by several thousand drivers circling the city streets throughout the day, burning gas, without a passenger. In fact, Uber/Lyft’s own recent traffic study put a figure to this: somewhere between 54%–62% of the vehicle miles travelled were with a rider. Indeed, attempts to make riding more efficient, with more people per car, aren’t faring to well in Toronto either. The City’s report notes that while a quarter of the rides in Toronto were using the shared or pooled options, the vast majority (82%) failed to match an additional passenger.

The inefficiency stretches to our streets, too. The City’s report aligns with Uber/Lyft’s traffic study in finding that some 5%–8% of the total traffic in downtown neighbourhoods are ride-hailing vehicles. Contrast that with PHD student, Mischa Young, and Prof. Steven Farber’s study of 2016 data which found ride-hailing made up less than 1% of trips in the city. Admittedly, these data sources aren’t directly comparable, but they point to a big gap between the amount of ride-hailing traffic in the city being orders of magnitude larger than the number of trips they serve. Less than 1% of trips taking up 5%–8% of city traffic.

The bulk of ride-hailing business in metropolitan downtowns, like Toronto, is a luxury service, undertaken by people that would’ve most likely taken transit, but could afford the alternative. As Christopher Yuen and Jarrett Walker write: “What is actually profitable to [ride hailing companies] is to swarm in the densest parts of cities, increasing congestion and competing with good transit, and that’s where they do net harm.”

Those are rides that are convenient precisely because they depend on many hundreds, if not thousands, of drivers buzzing around looking for a fare for only 50%-66% of the time they’re on the roads.

So what about the suburbs?

The experience of downtown cities is very different to that of its suburbs.

While downtown dominates the number of trips, surprisingly the greatest relative growth for ride-hailing happened in the ‘burbs. Over the time period of the city’s study, rides tripled in Scarborough from 4,600 to nearly 14,000 (they only doubled in the downtown core). Ride-hailing grew similarly rapidly in Etobicoke and North York; 187% and 160% respectively.

What is significant too in Toronto’s report is the fact that a greater proportion of suburban rides are in the shared services. This both reinforces the point that downtowners are able and willing to pay for their own taxis, whereas, suburbanites are probably just looking for a cheap way to get around in lieu of decent transit or bike-friendly streets.

But its expense remains, and the shared rides model is unlikely to be truly sustainable in its current form without elements of being a bus on a fixed schedule/route. It simply costs too much to have a driver circling around low density neighbourhoods in the hope of matching requests for rides on a similar route.

And this pattern isn’t likely to support those who really depend on transit, walking, and cycling. Particularly those without access to Canada’s notoriously expensive mobile phone plans.

What is the constant between downtown and the ‘burbs? The low-price of trips and the abundance of drivers circling to keep waiting times down.

A number of pressures are circling around the future of ride-hailing that mean the services might not last in their current form — from investors to organized drivers.

In the meantime, Toronto’s new training and experience requirements might make a small dent in driver numbers and improve standards a little, but the fundamentals remain unchallenged.

Part II will examine how much longer ride-hailing, as presently conceived, will last