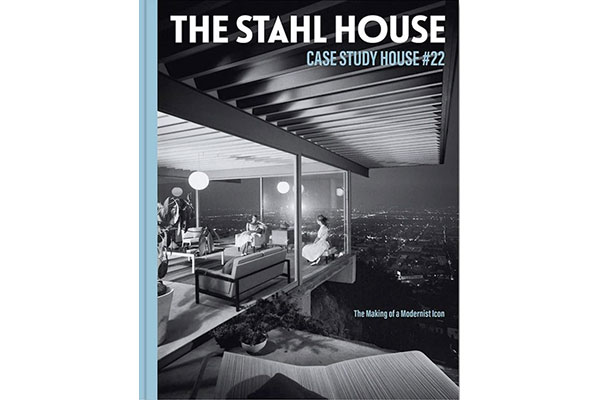 Considered one of the most iconic and recognizable examples of mid-century modern homes in the world, it was first envisioned by the owners Buck and Carlotta Stahl, designed by architect Pierre Koenig, and immortalized by photographer Julius Shulman. This 1960 glass-and-steel home in the Hollywood Hills has come to embody the idealism of a generation in search of the American dream. As one of the Case Study Houses designed between 1945 and 1966 under the vision of John Entenza and ARTS & ARCHITECTURE magazine, this was an affordable yet progressive design experiment to address the postwar housing shortage.

Written by the family members who grew up in this famous Pierre Koenig-designed house, this new publication is the official autobiography of the world-renowned Stahl House. With eleven compelling chapters recounting tales of the Stahl family—their struggles to build and later live in the house—the book also gathers in one place many archival images, including the entire suite of photos Julius Shulman did at his historic photoshoot, including his iconic cover photo.

In the first chapter, aptly titled The Dream, we meet the Stahls, Buck and Caroltta, who represent the epitome of the American Dream as it was in the late 1950’s, when one could still afford to build a new home in Los Angeles on a middle-income salary. We also learn in the first chapter that the authors’ father worked for Howard Hughes, managing to secure what at the time was a well-paying job at the Hughes Aircraft Company, providing him the ability to finance and build his and Carlotta’s dream home.

In the next chapter, The Confluence, we learn of the family’s chance meeting with the architect Pierre Koenig, which set what would’ve been just another post-war single-family house project on a date with history. In this chapter, the reader is provided with a brief history of both Koenig and the Case Study Houses program that ran between 1945 and 1966, with Koenig contributing two to those realized, with others in the program designed by the likes of Eero Saarinen and Richard Neutra. Case House Study #21, another standout by Koenig, was completed while #22 was still underway, with other notable ones in the series including #8, the house and studio of Charles and Ray Eames.

The Case Study House Program was initiated by John Entenza in the 1940’s, editor of the Arts & Architecture magazine, with the notion to provide for affordable housing needed by the burgeoning post-war middle class, the outcome of which was 36 unique home designs of which roughly two dozen were built. Julius Shulman contributed all the photography for the series and hit it out of the park with the now-famous “Two Girls”—now one of the most known images the world over, much like a Mona Lisa of architectural photography.

Case Study #22 as it turned out, was also a case study in overcoming what would become both environmental and economic challenges, as Shari and Bruce recount how they first had to move out because their father’s business had closed, with the house later facing threats from fires and seismic concerns. Currently, the house is under threat by the development of the lot below the cliff, which could destabilize the house’s structure and cause it to slide from its 125′ high perch.

Told from the point of view of two of the Stahl’s three children with the assistance of journalist Kim Cross, it also becomes clear early on the immense influence that growing up with a swimming pool had on each of them. Both would go on to become lifeguards at nearby Venice Beach, with Bruce almost on the American men’s swim team in 1979, canceled because of the US boycotting the Moscow Olympics. The book is in this way very personal, telling all of the challenges the family faced and their associations with the house. It is not surprising then that the surviving children continue to be close to it, providing tours to the public who search it out through their website.

In addition to the text the family has generously provided, there are also here numerous photos, drawings, work orders, and other archival images that accompany the design and history of the house. Of these, it is the collection of black and white photos in the centre of the book which are the book’s philosopher stone, representing the extent of the photoshoot Julius Shulman did of Case House #22. Among these is a picture someone took of Shulman himself, and how he hung precariously over a pony wall at the end of the site to get his historic shot of the pool and house interior.

Other gems include a typed letter from the architect himself to the contractor explaining that the photographer was showing up and he needed the place finished, including the application of the clear coat to the flooring. In an age of emails and site instructions, it is refreshing to see what was most certainly an urgent moment for Koenig expressed so eloquently.

The book also includes a chapter on the challenges the house has had for the simple reason of it being on a lot in modern LA, including seismic concerns and threats of fires, with the latter most recently affecting other nearby homes. And yet another chapter is devoted to the celebrity aspect of the house, and how it has become an icon of popular culture. This includes a list of the movies and fashion magazines the house has provided a backdrop for, having even been featured in an episode of the Simpsons.

With the demolition last week of a house by Marcel Breuer on Long Island, it is clear that the world of real estate development and municipal authorities cannot be left to decide the fate of architectural heritage, and that families like the Stahls are needed to ensure both the constructed and oral histories of these houses goes on. Sadly, Shari and Bruce’s brother Mark passed away in 2013, and as such the book is dedicated to him along with their parents.

This book is a fitting testament to a house that has become larger than life, with credit to Bruce and Shari for opening up their home and memories to us all.

For more information on The Stahl House and its authors, go to the Chronicle Books website.