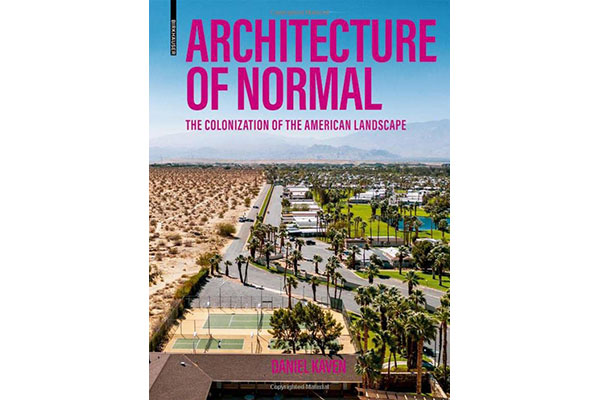 In the weeks leading up to my 40th birthday, I took an epic road trip. I drove east from Los Angeles through the desert highways, pueblos, and truck stops of my childhood in search of an understanding of the western architecture that I have always associated with home. This aesthetic lubricates my art and, conversely, represents the antithesis of my approach to design and urban planning.

When I wasn’t driving the open road, I photographed and filmed the architecture of the strip malls, fast food restaurants, Indian casinos and tract housing. I slept in roadside motels. I ate in diners and devoured drive-thru cheeseburgers. I envisioned what the future of America looks like and considered how we arrived where we are today. Architecture of Normal was born from this vision quest.

– Daniel Kaven, from the Foreword

Part Zen and the Art of Motorcycle Maintenance, and part Learning from Las Vegas, this honest portrayal of the connection between urbanization and colonization from Portland-based artist Daniel Kaven is a cornucopia of visual imagery. With over 230 illustrations – collaging archival photos from the Library of America Congress with the author’s own photography from a recent road trip to New Mexico, it includes several colourful art montages borne from this experience. The resultant hard-bound tome is both autobiography and manifesto, as well as a reference book with its encyclopedic ambitions to document the evolution of the American landscape, starting from the time of the arrival of Francisco Vazquez do Coronado up to our present pandemic age.

Laying the groundwork quickly in the book’s opening chapters, the author explains how being raised in New Mexico in the ’70s and ’80s impressed upon him a visual iconography of Interstate rest stops and strip malls, influencing his young artistic sensibilities to question the world and the wisdom of urban planning. Perhaps the most effective illustration of this is the book’s cover itself, depicting manicured green lawns in a New Mexico suburb next to the raw desert landscape—begging the question of whether this should be treated as normal, especially given our current climate crisis.

It is the book’s recent release—January of 2022—which very much allows it to bring us an up-to-date testament of our current reality. One of many instances of this in the book includes one of the author’s own pictures of the Las Vegas strip in late March 2020, a shot that documents how dramatically the pandemic erased all human activity from our public realm. Always on the periphery, both the pandemic and climate change are magnified throughout by the author’s narrative.

As a bonus meta-text running throughout the book, Kaven also includes dates of various human achievements on the book’s physical margins—such as the year the Parthenon was built, running up to our current global population (7.53 billion in 2017). But it is transportation and human mobility that provide the overall structure for the 456-page book, broken as it is into a chronological history of the modes of human movement, with the bulk of the chapters framed by each respective mode of transportation. Starting with horseback, the book progresses through the history of the locomotive train, automobile, and airplane, finishing with rockets, with the author’s central thesis being how each has had their respective impact on the natural landscape.

Imbued within each transportation paradigm, Kaven suggests there has always existed in humanity’s relationship with the landscape a tension between the natural and the artificial, with colonization (or colonisation, which is the British spelling) being the assimilation of the natural into the colonizer’s technological paradigm. A strip mall in the New Mexico desert is an apt representation of this dichotomy, as has been seen through history in other culturally loaded forms of architecture. And as already noted, Robert Venturi, Denise Scott Brown, and Steven Izenour created the definitive architecture road trip treatise in 1972 documenting and distilling the 1970s Las Vegas strip into the language of the decorated shed vs. the duck.

In fact, the Las Vegas strip occurs frequently in Kaven’s visual lexicon, including a two-page nighttime aerial photograph from the Library of Congress showing the strip in 2009. As he explains, he is an artist working in the field of architecture, so his discovery of such buildings as the Best retail store in Houston would’ve occurred along his road trips with his parents as a child, rather than in a textbook as it is learned by most architects. The impact of this building on him as an artist would’ve been understandably immense, representing in it all the tension and release that Kaven would’ve had for all the strip mall architecture he was subjected to while growing up.

Several other archival photographs of the American interstate have had a large influence on the author, as evidenced by his including a canonical image of Route 66 circa 1969 in the book’s opening pages, explaining how this car-dominated landscape forced him from an early age to question why this was an acceptable urban condition. The thoughtful and powerful art collages he has created for the book, provided throughout as full two-page spreads, are interspersed with smaller digital compositions, such as the poignant Rushmore 2017  in which he has photo-shopped suburban tract housing on top of Mount Rushmore.

Quoting the Socratic wisdom that we are wise because we know we are not wise—the author admits as much that he has still many things to learn, surely discovering on his road trip that to romanticize something as politically charged as how the West was won is an enterprise fraught with difficulty. Despite this, Kaven should still be commended for how deep he has delved into the long and storied history of American urban planning, with one of many nuggets in the book being the map of the Interstate highway construction project from 1958.

Architecture of the Normal is an introspective interpretation of American urban planning, seen through the eyes of one who has appreciated and gathered its rich visual iconography for his own artistic creativity and inspiration. As a cultural manifesto, the book is mesmerizing and a testament of how civilization’s unquenchable ambition for progress has often been used as a justification for colonizing the American landscape.

For more information on Architecture of Normal, visit the Birkhäuser website.