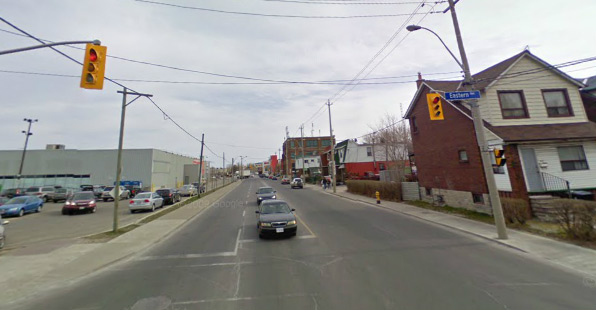 A couple of weeks ago I wrote about the potential for Leslie Street from Queen E. to Lake Shore to be turned into a gateway to the Leslie Street Spit and eastern waterfront when the TTC lays down tracks for its new car shed.

Last week I attended a community meeting about the project where many community members brought up this issue with the City and TTC staff present.

Staff replied to the community’s desire to at least investigate bike lane possibilities by stating that it was not part of the original Environmental Assessment or traffic study, whose mandates were restricted to assessing the impact of building the tracks, and as a result there was no analysis of this option. It was frustrating, because without studies no-one had enough information to assess and discuss the viability of bike lanes and what the impact would be (e.g. on parking). Everyone was talking blind.

It became clear that the City really needs to change its processes to look at not just the impact, but also the potential, for any street where major work is being planned.

Both staff and community members did point out that it would still be possible to create bike lanes after the tracks are laid, just without any substantial permanent infrastructure.

However, at this point another issue emerged. The TTC and the City plan to eventually (say, in 30 years) introduce full streetcar service in its own right-of-way through the redeveloped Port Lands, including an exit to Queen Street along Leslie. They explained that, while it might be feasible for the moment, they do not want to put a permanent bike lane in one of the traffic lanes because if they eventually claim the centre lanes for a transit-only right-of-way, they’ll need the curb lanes for vehicle traffic. And if one of them is being used for a separated two-way bike lane, it would be a difficult political battle to remove it.

It’s admirable that the City and TTC are planning that far ahead. And it’s somewhat flattering to Toronto’s bike community that staff seems to be in such fear of their lobbying power, but from the events of the last year it looks like the City is quite capable of removing bike lanes when it wants to.

It seems like it would be possible to create “temporary” bike lanes along one lane of Leslie for 30 years, using inexpensive and easily removed infrastructure to separate them from traffic. Given the vagaries of transit politics in Toronto, who knows what the situation will eventually be, and it seems foolish to deny a useful improvement now for a hypothetical plan 30 years in the future, at which point quite different solutions might have emerged.

Better news from the meeting was a presentation from Kim Storey of Brown and Storey Architects regarding the sidewalks. Whatever happens with the street, the TTC and the City are committed to working to improve the narrow, unsafe sidewalks along Leslie. Storey came up with ingenious ways to work within very limiting constraints to make the sidewalk at least decent, interesting and safe, even if it will never be a walking mecca.