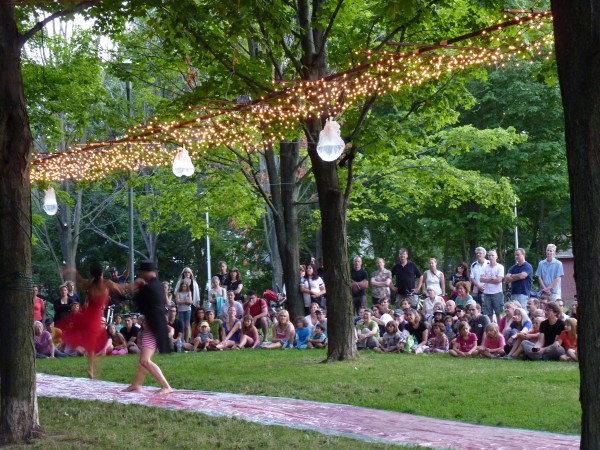 This week, I took part in Dusk Dances at Withrow Park, a Toronto-based outdoor dance festival that presents diverse choreographic works in city parks, free or PWYC to the public. It was my first experience with Dusk Dances, which I learned is now in its 18th year, and, evidently, quite popular.  As dusk descended in Riverdale, Withrow Park came alive. A crowd of over 300 dance enthusiasts gathered, with children and dogs in tow.

Our theatrical host for the evening, Dan Watson, led our group through the park, stopping at various locations to view site-specific dance pieces by five Canadian choreographers, each inspired by the park’s natural environment.

The diversity of styles and choreographic visions of dance was fantastic. Pieces ranged from traditional to contemporary, some spooky and others silly. Truly, something for everyone. The event highlighted the varied work of local choreographers and dance artists while engaging the public of all ages in an event that was both artistic and social.

Bouchard said that some performances have attracted as many as 800 attendees, who watch the show together on the grass, on the same stage at the dancers. There’s something very natural about this event as a community-building experience, fostering connections between both neighbors and artists.

“[The audience] walks together and talks about the piece they just saw, meeting their neighbors. It feels very organic,” said Bouchard.

Dusk Dances is, no doubt, a beautiful cultural experience. But what I found most engaging about the event was they way in which it made use of space in Withrow Park, asserting an artistic presence there. And as Bouchard notes, this is all part of Dusk Dances’ mandate to ensure that parks belong to people.

“People go to see an event in Withrow Park, and the park is kind of changed by a piece having happened in a particular site. It makes people discover the park in a different way. They see a piece happen and they may walk by two days later and say, ‘I remember when that piece was there.’ It leaves little ghosts…it inhabits the space with energy. There’s something quite beautiful and poetic about that,” said Bouchard.

Dusk Dances continues in Withrow Park nightly through August 5th. Other Toronto events will be presented in mid-August in Earlscourt Park and Chalkfarm Park, with other events throughout Ontario this summer.