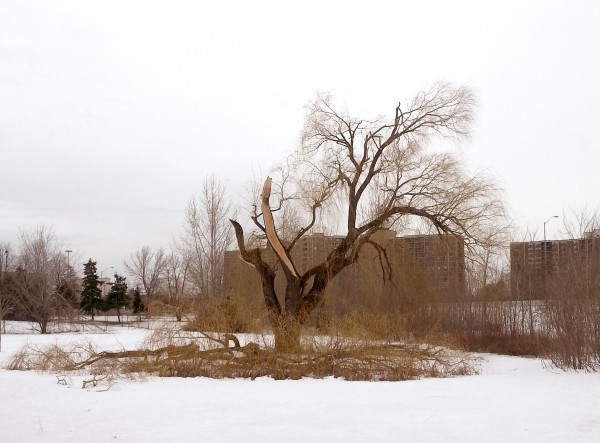 Last week I was walking to the convenience store up the street when I came across the tree above.

It was the remains of a huge willow that I grew up alongside next to Highway 427. I gathered that it was a victim of the ice storm, the one that brought down so much of Toronto’s tree canopy. That knowledge was far from comforting. The willow was left here with a ghastly scar, like a corpse in plain sight, something you just shouldn’t see, but it drew me in and as I approached I remembered all the summers spent playing beneath this tree.

My imagination took me away to that frigid night where this arbor tragedy happened: from above, drops of cold rain fell on the willow’s crown, slipping down its hundred hanging stems. The old willow grew cold, sullen and reflective. Slowing as they fell, the raindrops congealed into glassy ice.

The willow began to bow. Now each branch was pulled taut from the weight of the ice. The rain cleared, the clouds separated and the cold white moon was revealed while the willow was given a moment’s respite. A deep breath, cold biting air. All around, the familiar lights of the Etobicoke apartment towers were dark, the roads silent, the world a ruin. The white light of the moon returned the park momentarily to an ancient past.

Time stopped as the branch fell. In the air it curled and turned gently, scattering moonlight. The limb shattered the smooth cold surface of the frozen earth, each shard reflecting the moon. The willow, left alone to contemplate this turn of events, begins to wither.

Mangled, the tree is nothing like the smooth flowing locks of leafs I remember from a summer dream. In that dream it flows and turns in a warm breeze, leaning over, shading and comforting the people sitting in its benevolent shade, welcoming any visitor in its lush embrace. Beneath it was the site of a grand court of mothers watching their children. It was the guard to the kingdom of green. It was the mystery of accumulation and the ruler of scale. It was the familiarity of place and a rebellious antithesis to the concrete and brick conspirators encircling it.

Most of all, it was a myth embodied. The myth gave it a crown, and the myth usurped the throne. Stories crystalize on the willow’s long white branches in the middle of the night. 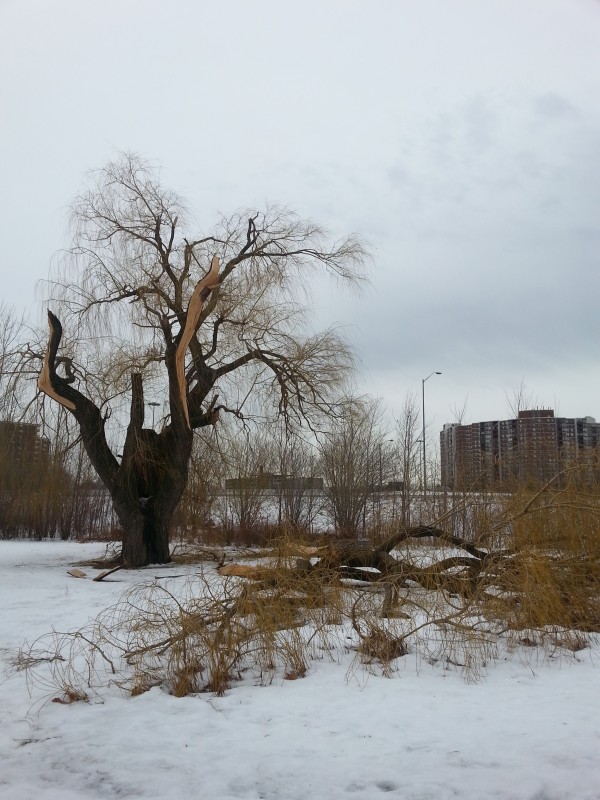