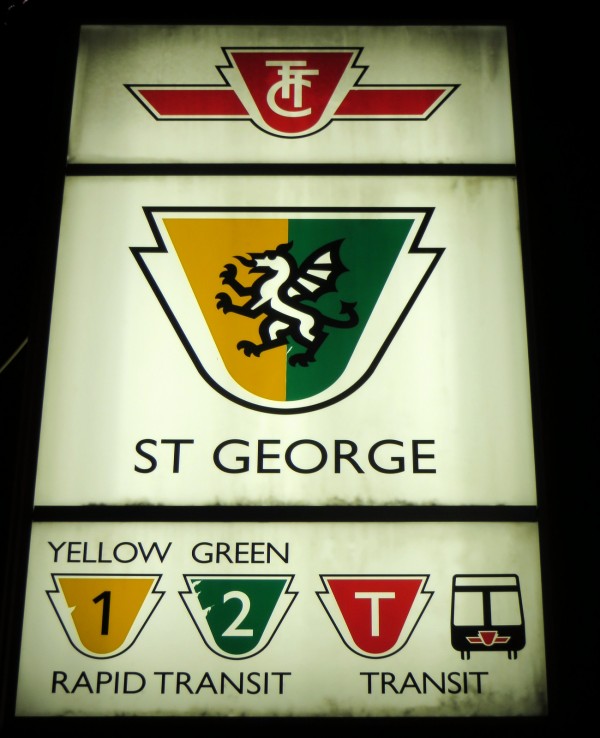 The Toronto Transit Commission (TTC) is currently testing changes to its subway signage. New signs have been rolled out at Bloor-Yonge Station, the busiest in the system, and partially at St. George. While maintaining the basic style of signs installed since about 2000, the  most noticeable difference is the use of subway numbers, in large, circular “bullets” — a yellow 1 for the Yonge-University-Spadina Line and a green 2 for the Bloor-Danforth Line. The Scarborough RT is depicted as Line 3, and the Sheppard Subway, the newest subway route, has been designated Line 4. (New subway and LRT routes under construction or proposed would also get numbers — the Eglinton-Crosstown LRT would be designated as Line 5.)  There are other changes proposed, including new subway route maps, and there are more changes coming, including revised, simplified system maps and the redesign of bus stops.

Right now, Toronto’s subway is a clutter of many different signs installed at different times in the subway’s 60-year history, including metal white-on-black signs in the “TTC subway font” — an elegant, though somewhat difficult-to-read typeface. In the 1970s, pictograms and a lower-case Helvetica-variant font were introduced; and about 2000-1, around the time the Sheppard Subway was nearing completion, another new signage standard was introduced, with larger pictograms, coloured horizontal yellow, green, blue and purple lines representing subway/RT routes (with red to represent surface buses and streetcars) and platform-length overhead signage. Old signage was replaced on an ad-hoc basis, if at all. Simply stated, wayfinding in the TTC is a mess.

This latest trial, which the TTC does seem to be serious about fully implementing in 2015, is not the first time that the TTC contemplated widespread changes to its signage. In 1993, Paul Arthur, a well-known and respected British-Canadian graphic designer, designed a new wayfinding system for the TTC; this was tested at St. George Station and much of its signage remains to this day; some of the elements were later used by the TTC. The subway lines were numbered, as they are now in the latest wayfinding trial, and given new names according to their colours on maps – the Yonge-University-Spadina Subway was called Line 1-Yellow. Subway line colours were incorporated into signage outside the station. Red was used to guide passengers towards surface vehicles. 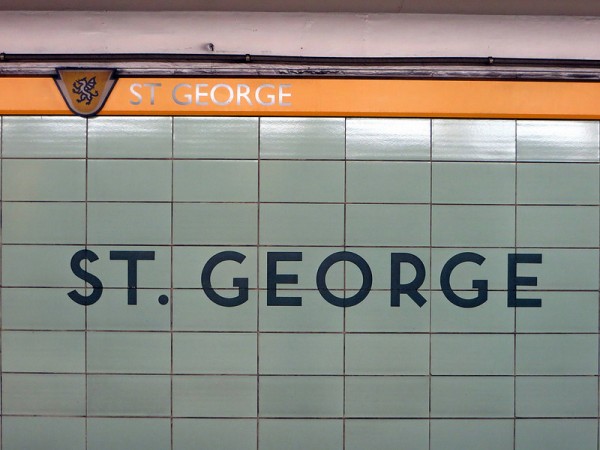 As part of Arthur’s plan, each subway station would have its own unique pictograph contained in a shield adapted from the TTC’s logo; these pictographs would have depicted either the station’s name or local geography. St. George Station’s pictograph, the only one completed, features a dragon similar to those used on crests and shields to represent England (though St. George Street was not named for the legendary dragon-slayer). The shield’s background colour would depict the line the station served. The use of unique pictograms is used in the Metro system in Mexico City; there each subway and Metrobus stop has a unique logo to assist passengers with low literacy skills.

Paul Arthur’s system was never implemented, though some elements, such as using red to direct passengers to surface routes, and numbering the subway lines were eventually adapted. But we will never know what symbol would be used for Bessarion Station. (A friend joked a tumbleweed would be most appropriate.) 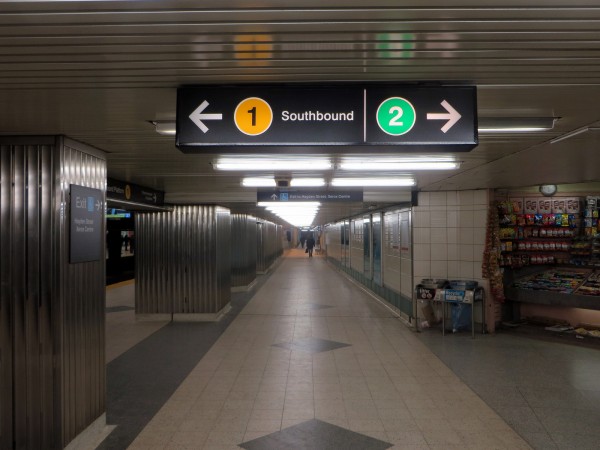 The TTC has used numbers for a long time, originally assigning 600-series numbers to its rapid transit routes for internal operational purposes. (The only 600-series route used publicly was the 604 Harbourfront Streetcar, which was the first streetcar route in the modern era separated from general traffic; it was depicted as a “rapid transit” route for a short period in the 1990s before it was renumbered 510 and integrated into the Spadina Streetcar that opened in 1997.)

The TTC renumbered (and renamed) the 2 Anglesey and 4 Annette buses in January 2001 to reassign them to the Bloor-Danforth Subway and the new, soon-to-open Sheppard Subway;  the TTC began to use the use the single-digit route numbers internally and on some public documents soon after, but not for wayfinding signage or on maps. This is the first time where numbers are given precedence over line names; this does provide a solution to the cumbersome “Yonge-University-Spadina” name, which will be less descriptive of the route that line serves when the extension to Vaughan opens in 2016. When more rapid transit routes, such as the Crosstown LRT (and hopefully more LRT routes and the Downtown Relief Line) open, the TTC will have to renumber more bus routes, starting with 5 Avenue Road, 6 Bay, and 7 Bathurst.

The numbered bullets are similar to those used in the New York City subway system, operated by the Metropolitan Transit Authority (MTA). That larger and older subway uses a complex system of colours, numbers and letters to identify each of its twenty-four routes, each the legacy of three separate operating companies that merged in 1940. Numbered routes are those of the former Interborough Rapid Transit Company. Routes lettered A through G are former Independent Subway System routes and letters J through Z  are former Brooklyn-Manhattan Transit routes. Behind the letter or number on the route marker is a colour, which identifies the main subway line through Manhattan each train takes (for example, the dark green used for the 4, 5, and 6 trains all follow the IRT Lexington Avenue Line; the exception is the G train, a light green line on maps, the only route that does not enter Manhattan).

Smaller systems, such as Chicago, Los Angeles, and Montreal primarily use route names based on colours. Yellow and green, the colours assigned to the Yonge-University-Spadina and Bloor-Danforth lines, were first used on TTC subway maps in the 1970s, and on system route maps in 1982. The Scarborough RT was always depicted as a blue line on maps, while the Sheppard Subway is coloured magenta. While Paul Arthur offered both numbers and colours to identify each rapid transit route, the TTC seems keen on empathising numbers. In a multilingual Toronto, that makes a lot of sense.

There are a few minor changes to the TTC’s newest subway wayfinding scheme that I would suggest. There should still be a text reference to Yonge Trains under the yellow “1” bullet and to Bloor Trains under the large “2” bullet in the sign pictured above, especially during the transition period — there will still be many passengers who will refer to the subways by their original names. Exits to street level appear to be de-emphasized. But overall, the plan to number Toronto’s rapid transit lines is a great one.