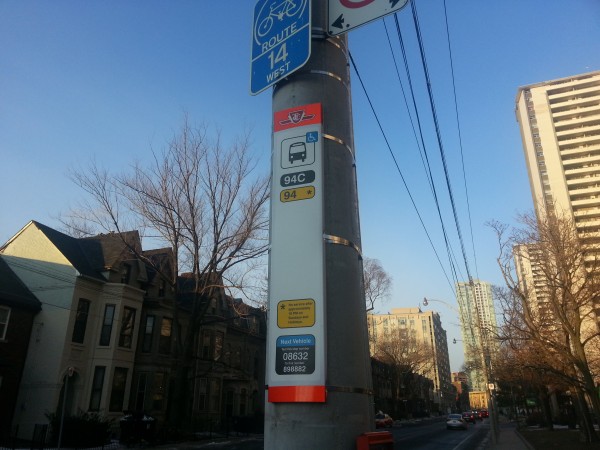 New bus stop signs are currently being installed on the 94 Wellesley bus route, a trial of the TTC’s new wayfinding strategy. These new signs, while providing more useful information, are an evolution in the TTC’s bus/streetcar stop design history.

All bus/streetcar stop signs, while retaining their traditional white-with-red-stripes design, will now include the route number and applicable branches that serve the stop, with colour coded bubbles to identify regular routes (black), limited service (yellow), express (red) and Blue Night services (blue). Asterisks, such as that shown for the through 94 branch, point to more detailed service information. Thew new signs also include the TTC logo and next vehicle text-back service information.

New maps, an idea imported from London (and also used by Translink in Vancouver), will be installed in shelters and other TTC info-posts. These “spider maps” (example here) show in detail the routes serving that stop and immediate connections (with a helpful “you are here” marker), but for the sake of simplification, the rest of the surface network is removed. As eloquently stated by Jarrett Walker in the blog Human Transit,

…there’s a more specific issue with spider maps or “buses from here” maps.  They promote single-seat rides while concealing connection opportunities.  More generally, they discourage people from discovering how to navigate the complete network. [link]

Spider maps can be quite useful (they are clear, simple and show destinations en route), but the TTC is a huge network. If these maps replace the current system maps found in shelters and stations, it will create a different wayfinding challenge. BlogTO has a good post that illustrates how these new spider maps will look.

While the new signs are, in my opinion, a big improvement with the additional information, I still feel tweaks can and should be made. The route’s ultimate destination would be a useful addition to  stop signage, especially on a route with multiple branches. This is particularly important if there isn’t a shelter displaying one of those new spider maps.

The bus stop on Wellesley Street in the above photo is somewhat confusing and incorrect. The main 94 route runs from Ossington to Castle Frank Stations via Wellesley and Harbord, and as correctly shown above, it runs at all regular service times with the exception of late evening Sundays. The 94C is a short branch that duplicates the route only on its eastern side, between Wellesley Station (on the Yonge Subway) and Castle Frank Station, and operates during rush hours to supplement the through 94 and after 10PM Sunday, when the full route no longer operates. Therefore 94C itself isn’t a full-service route. It also isn’t clear what the difference in routing is between the 94 and 94C. As I am well-informed about the TTC, I understand the intent of the above information, but I doubt a novice customer or someone unfamiliar to that route will understand this very well.

As this is still a pilot project, I hope that the TTC is open to public input and revisions to its new surface routes maps and signs. At least with the surface stops, I feel that the TTC is on the right track; I am less enthusiastic about the planned spider maps. 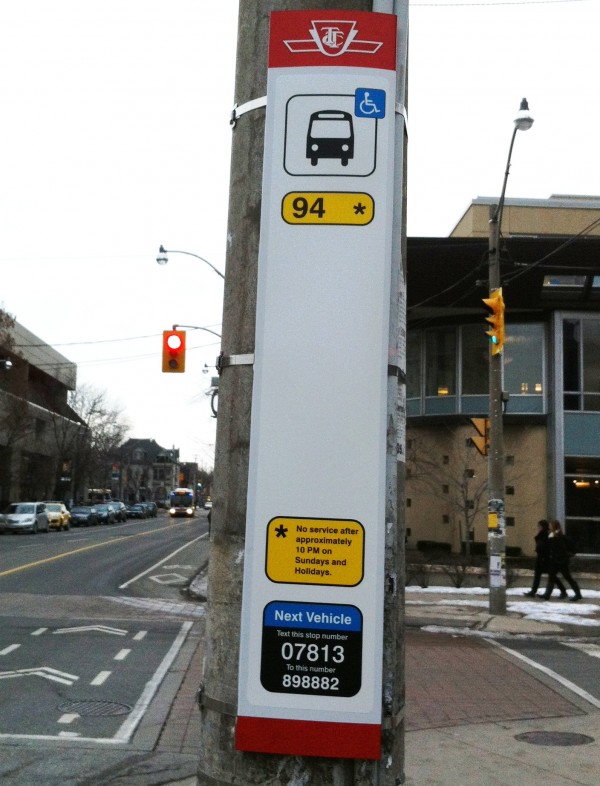