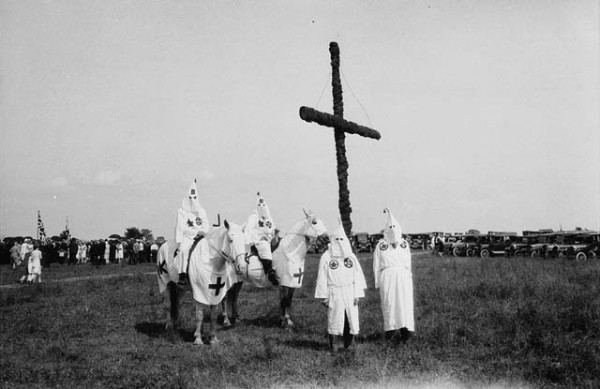 Two men in hooded Ku Klux Klan uniforms flash Nazi salutes on a porch. Beside them, a woman with “white power” tattooed crudely across her chest stands next to a man in thick glasses and a t-shirt with a KKK design on the front. Another man wears a denim jacket with swastikas scrawled on the front.

It looks like a scene from the 1960s American south, but this photo was taken in Riverdale in 1981.

It’s an uncomfortable truth that America’s most notorious and abhorrent racist organization found a foothold in Canada in the 1970s and early ’80s. The product of numerous extreme right wing groups active in the city following the second world war, the Canadian Ku Klux Klan, like it has throughout its bloody history in the United States, fed off prejudices and fears already present in the city,

The early Klan, named after the Greek word Kuklos, meaning circle or band, was founded in Pulaski, Tennessee, in 1865. Violently opposed the newly won freedom of slaves and, dressed in white hooded capes, they whipped, shot, burned, lynched, and beat to death hundreds of people in an effort to disrupt elections that might produce further reforms.

The group’s popularity had faded by 1900, but, thanks to growing anti-immigrant sentiment in parts of the United States, it underwent a revival in the 1920s with Klan members winning elected positions at the city and state level.

As an illustration of its reach, that decade the KKK claimed 500,000 followers and had its own real estate, merchandise, and publishing arms. Its national magazine, Searchlight, ran adverts for Coca-Cola and auto maker Studebaker.

It was during this time that Klan tendrils first reached north of the border. “Anti-negro, anti-Jewish, and anti-Catholic” outposts were established in the Maritimes, Manitoba, Quebec, and Ontario, but its support was mostly centred in British Columbia, Alberta, and Saskatchewan, where there was already strong anti-immigrant hysteria.

In 1921, B.C. removed the voting rights of tens of thousands of Chinese, Japanese, and East Indian people, regardless of their citizenship, while federal immigration policy passed a decade earlier allowed the government to turn away any person of “any race unsuited to the climate or requirements of Canada.”

In Vancouver, the KKK was based out of Glen Brae—now Canuck Place Children’s Hospice—a distinctive Shaughnessy mansion with a multi-domed roof. Their avowed aim was the “removal of all Orientals from Canada” and the expropriation of property in order to maintain “Anglo-Saxon standards in the Dominion.” 13,000 members were on its books in B.C. alone, it claimed, but a concerted effort by the local labour movement eventually led to a decline in the Klan in the 1930s.

The third revival of the Ku Klax Klan came in the United States in 1954, following the Supreme Court decision to ban racial segregation in schools and the Montgomery Bus Boycott in December 1955. The group, as it had in the 1880s and 1920s in Canada, used extreme violence in an attempt to snuff out new civil rights reforms.

In Canada, the Klan didn’t resurface until much later, around 1971. After years of sporadic activity by various extreme right-wing groups following the second world war, white supremacists operating as the Edmund Burke Society and later the Western Guard were behind sickening beatings, mass pepper sprayings, and graffiti attacks.

Under leader Don Andrews, the Western Guard were responsible for numerous acts of racist vandalism and thuggery, including the defacing of synagogues and bookstores. In 1975, members of the Guard savagely members of a black musical act during a taping at Citytv. The band leader was bludgeoned with a metal pole and gang members flashed Nazi salutes to the cameras.

Andrews, a former employee of the City of Scarborough and Toronto East General Hospital, was a dominant figure in the extreme right political scene in Toronto. He was “a sort of godfather to many of the present-day organizers of the Klan,” wrote journalist Julian Sher in his 1983 book White Hoods: Canada’s Ku Klux Klan, the source of much of this information.

(Also, despite being a violent racist, Andrews managed to finish second behind David Crombie in the 1974 Toronto municipal election, albeit by some distance. He got 5,600 votes to Crombie’s 100,600.)

Though they operated under different names, the various extreme right groups in Toronto were all closely related. “A direct line could be traced from the Canadian Nazi Party to the Canadian National Socialist Party to the Edmund Burke Society, the Western Guard … and finally to the Ku Klux Klan,” Sher wrote.

McQuirter, young and passionate, would become the driving force behind the Canadian Klan, which was officially launched out of his Dundas St E. home in 1980. His wood-panelled living room was converted into an office with a pair of cluttered desks, a map of Canada, and a few telephones. A mail forwarding company, also run by the KKK leader, shared the room. The Klan even appeared in the Toronto telephone directory that year.

McQuirter wanted an end to “non-white” immigration and he tailored his KKK platform to match a spike in public concern about newcomers to the country. “We believe that the government should pay to send the blacks back to their own country,” McQuirter often said, frequently playing down the group’s propensity for violence. “We’re not anti-anybody, we’re just pro-white.”

Despite McQuirter’s claims, numerous hideous acts of violence and intimidation were linked to his Klan, or people sympathetic to the cause. In 1979, a black man was temporarily blinded after being pepper sprayed on the Toronto subway by attackers carrying Klan business cards. Crosses were burned on the lawns of Indian families in Winnipeg, a man’s face was slashed by a group teens in Klan shirts, and “go home niggers – KKK” spray painted on the homes of Nigerian students studying at the B.C. Institute of Technology.

The extensive media coverage only helped fuel the Klan. “The news media really blew it up and did all our work for us,” McQuirter would recalled to author Sher.

The official pushback, what little there was, came mainly in the form of public condemnation. “I want to slam the door of Toronto in their faces,” said Metropolitan Toronto Chairman Paul Godfrey. “They’re bloody well not welcome in the province,” Roy McMurtry, the attorney general, insisted. However, despite numerous denouncements from the government, no direct action was taken by the city or province to quash the Toronto-based KKK.

Responsibility for eliminating the Klan fell to local community and church groups.

In 1980, the Riverdale Action Committee Against Racism was founded with the express purpose of driving out the Klan. Meanwhile, Toronto KKK literature dumps targeted young people and promoted the “Klan Youth Corps.” Business cards were handed out at Monarch Park Secondary School and D.A. Morrison High School in East York.

It was amid the growing tensions that RACAR organized a march on the Toronto Klan offices in the summer of 1981. A group of about 300 protestors carrying signs and chanting “smash the Klan” paraded past the Dundas St. E. home as eight members of the KKK, two in uniform, gathered on the porch to shout back. A line of police officers kept the groups separate as TV camera crews, photographers, and reporters looked on.

“When we marched right past the Klan office, going through that stretch I felt like we were liberating Paris,” Dierdre Power, RACAR’s co-ordinator, would recall to Sher. “The people who lived around the Klan office or on the other side of the street were out on their porches, cheering us on.”

Despite attempts at intimidation toward members of RACAR, the group quit the neighbourhood a month later, setting up on Springhurst Ave. in Parkdale.

McQuirter and his organization found they were no more welcome in the west end, however. Rallies organized by the local NDP and members of PACAR, a Parkdale version of RACAR, made numerous passes outside the home carrying signs that read: “No Nazis, kick the Klan out.” Push back came in the form of an anti-racism rock concert, a widely circulated petition, and an effective program  ofleaflet distribution. A letter writing campaign convinced Bell to withdraw the Klan’s phone book listing

The Toronto KKK gradually undid themselves. Ironically, their attempts at creating racial tension had the opposite effect. PACAR, RACAR, and other opposition bodies were a collection of community groups from a variety of ethnic backgrounds, united instead of divided.

Members of the group also tried unsuccessfully to stage a coup in the Caribbean island nation of Dominica, and there were several related arrests in 1982. McQuirter was jailed for 10 years, eight for the attempted murder of a former Klansman and two for his role in the Dominica debacle.

The Canadian Ku Klux Klan, without its core leadership, fragmented and fell into obscurity. Today, its former Dundas St. E. and Springhurst Ave. offices are once again anonymous homes.

In 2007, McQuirter told the National Post he had abandoned his racist views, calling them “abhorrent,” though many of his former associates continue to be active in extreme right wing circles.