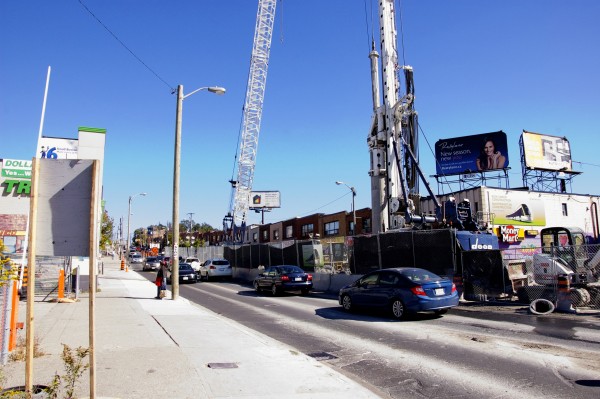 So, let’s pause here to offer a big shout-out to former mayor David Miller, whose Transit City campaign circa 2006-2007 resurrected a long and shamefully delayed effort to bring rapid transit to Eglinton; a second shout-out to former TTC chair Karen Stintz, who defended the Crosstown against Rob Ford’s attacks; and a third one to the pre-gas plant McGuinty Liberals, who ponied up the dollars.

But this massive contract is good news for another reason: according to a community benefit agreement (CBA) appended to the Metrolinx RFP last spring, the successful bidder – as well as those ultimately chosen to build the Finch West and Sheppard East LRTs — will be expected to hire from a pool of workers who come from some of the city’s most marginalized communities and have received training through apprenticeship programs delivered by the building trades unions.

Within six months of winning the contract, according to the framework agreement, the winning consortia must submit a hiring and recruitment plan to Metrolinx that passes muster with the agency’s CBA goals.

“Metrolinx recognizes that major infrastructure projects like Crosstown should also include additional benefits for the communities in which we work; including employment, training, apprenticeship, local supplier and social procurement opportunities, where possible,” says spokesperson Anne Marie Aikins. “We believe these types of strategies support the delivery of large infrastructure projects and don’t interfere on-time or on-budget performance.”

It’s a big deal, because we will be able to see, on a large scale, the impact of institutionalizing a connection that should have been incredibly obvious to politicians and policy-makers of all ideological stripes – that governments can and should leverage the huge sums spent on infrastructure to help un- or under-employed people move into stable jobs.

President Franklin Delano Roosevelt and indeed many Depression-era leaders understood how to use public works to get the unemployed back into the workforce. In our own era, as I reported in this space last year, many U.S. city-regions have incorporated CBAs into the way they deliver large construction projects. But apart from the local employment conditions baked into the Regent Park revitalization [PDF], Toronto has been a CBA-free zone.

Steve Shallhorn, chair of the Toronto Community Benefits Network, says the group in the past several months has held a series of four engagement/recruitment meetings in parts of the city with high unemployment levels (Mount Dennis, Malvern, Flemingdon Park). Working with labour and community organizers, the TCBN sought to identify candidates for apprenticeship programs that will produce trained workers who can be recruited from hiring halls by the winning consortia.

At one session, held in Etobicoke last fall, about 90 Somali-Canadians showed up and put their names on lists for the apprenticeship programs, which will be supported by the Ministry of Training and Colleges and Universities. Shallhorn says all were either unemployed or working in McJobs; interestingly, only one of the registrants showed up on provincial employment databases, indicating that they had not been counted as part of the city’s unemployment tally. As Shallhorn told me last week, “They’re the population the agencies want to target.”

The Metrolinx CBA will likely specify the proportion of skilled trades workers to be recruited from these expanded apprenticeship programs. There will be no extra cost to the consortium or local taxpayers. And, as Shallhorn points out, many contractors are familiar with such requirements from the work they do on large projects on First Nations lands, where federal and treaty rules specify local hiring.

Given that Premier Kathleen Wynne has come out publicly in support of CBAs and that Metrolinx is now executing a huge RFP that incorporates just such a rider, it’s high time that the City of Toronto, the TTC and Toronto Community Housing follow suit with their long-term portfolio of capital repairs and expansion projects. The City’s own ten-year capital budget [PDF] is a staggering $28.7 billion – six times the size of the Crosstown contract.

In fact, if Mayor John Tory genuinely wants to move the needle on youth unemployment in Toronto’s high needs communities, he should push council to adopt a broad policy that requires contractors to sign community benefits agreements on projects above a certain size threshold – e.g., $25 million. And if he doesn’t want to, I’d urge another member of council – all those Liberals! – to do it.

As Shallhorn says, “I’m hoping that the work that has been started at the province can be transferred to the City in short order.”

Tory, who has been trying to demonstrate his social bone fides with measures like free TTC rides for kids, could actually take this structural step in the current budget cycle. Indeed, I can’t think of a single good reason why he wouldn’t.