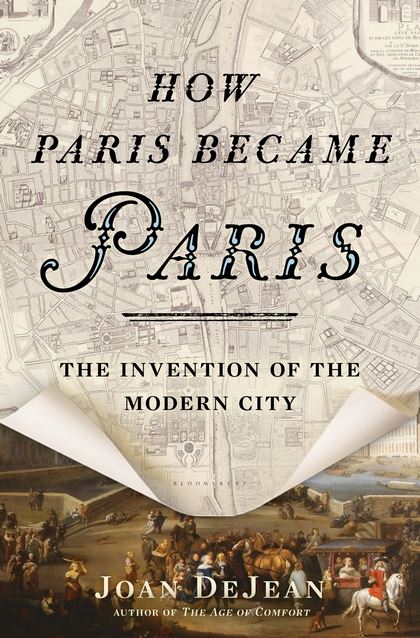 Walking was the primary way that people got around cities from the time cities first emerged until the 20th century. But, argues Joan DeJean in her book How Paris Became Paris: The Invention of the Modern City, the idea of a city where people want to walk around for pleasure (as opposed to just to get somewhere) emerged in 17th century Paris, the era best known for the “Sun King” Louis XIV.

The transformation started before him, though, kicked off at the very beginning of the century by King Henri IV with the building of the Pont Neuf (the “new bridge,” still called that despite now being over 400 years old) and the elegant Place des Vosges. Henri IV told the city government his intention was to make Paris “beautiful and splendid … a world unto itself and a miracle of the world” (p. 6). His projects were followed by the creation from scratch of the planned Ile Saint-Louis neighbourhood by private developers under his successor, Louis XIII, and then a whole variety of ambitious projects during the reign of Louis XIV, including both royal and private initiatives.

DeJean argues that a series of urban innovations that we now think of as essential for the city were pioneered in Paris during this century: sidewalks, residential squares, boulevards, street lighting, mass transit. She also argues that much of what we think of as the Paris famously created in the 19th century by Baron Hausmann actually has it origins in the 17th century: it was Louis XIV who created the first grand, tree-lined boulevards by tearing down Paris’ walls; and it was 17th century private developers who created the first streets lined by mid-rise private buildings made of light-coloured stone that defines the Paris “look.” Other quintessentially Parisian characteristics, such as its international fame as a city of fashion, the arts, shopping, and romance (what Richard Florida might call the “creative economy”), can also trace their origins to this century.

An appealing element of DeJean’s approach is her use of the media of the time — pamphlets, early magazines, travel guides, popular plays — to explore not just policies and projects, but also people’s changing perceptions of the city and its urban innovations. Her book tracks, not just physical changes, but also the evolution of Paris’ reputation into what was widely considered the most attractive city in Europe.

What transformed Paris into a city for walking for pleasure was creating an interesting, appealing urban landscape, along with some practical improvements. Previously, the main attractions for visitors to most cities were confined to a few major royal and religious buildings, with little of interest in-between. But by the end of the 17th century, the public spaces of Paris, and many of its everyday streets, were themselves beautiful and appealing. As DeJean says, rather than just having a few monuments, “The city itself was the monument” (p. 2).

The Pont Neuf was the first bridge in the city to not have houses along the sides, creating dramatic vistas along the river. It also introduced the first sidewalks in Europe since ancient times, which, along with the wide, open, fully-paved street, created space for people to walk, shop at stalls, and see and be seen. This experience was extended as Paris built attractive stone quays along the Seine. The Place des Vosges (originally, Place Royale) was the first major square to be elegantly designed just for residences and shops, with no institutional building to dominate it. It made everyday living elegant, and this aesthetic of well-designed residential (not just monumental) architecture was extended to new developments built on the Ile Saint-Louis, around the Place Vendome, and beyond. An increasing number of streets were paved with what became the iconic Parisian cobblestones. New, more open styles of shops with goods on display made browsing and window-shopping a reason for strolling. Street lighting made it safe to extend walking hours into the night.  And the elegant, tree-lined boulevards that gradually replaced Paris’ walls created a public space for strolling, gathering, and watching entertainment open to everyone. Walking became an urban pasttime, not just a way to get around.

There are entertaining parallels with modern urban conditions. A short-lived urban mail system was introduced in part for “those who are always in a rush and can’t manage to do half the things they hope to do” (p. 124). It was hoped the mass transit service (conceived in part by the philosopher Blaise Pascal) would reduce congestion by persuading people to leave their private carriages at home. Within weeks of it starting, someone complained that “five carriages passed me by without stopping because there wasn’t a single empty space” (p. 128).

If the book has a flaw, it’s that changes and contrasts tend to be overstated. Statements about how things were before, or elsewhere, should be taken with a grain of salt (for example, different parts of society did actually mingle on the street in other cities and in earlier times). Likewise, the innovations were not always as dramatic as they first appear. The sidewalks were confined to the Pont Neuf and the quays along the Seine. The transit service (coaches travelling assigned routes regularly, for a fixed fare) was remarkable, but it was private, and it went under after three decades — there was no further mass transit in Paris until the 19th century.

Overall, though, the book is full of fascinating information, and is convincing in arguing that 17th century Paris played an important role in changing what people thought a city could and should be like, shaping an ideal of the city that still has influence today.