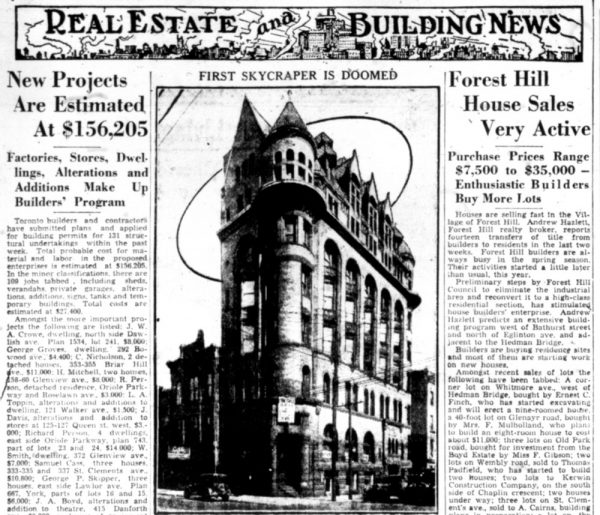 Despite being the work of a major architect and one of the city's tallest towers, the Beard Building was a commercial failure that lasted barely four decades. Image: Toronto Telegram, May 21, 1935.

The Beard Building is a historical enigma.

Toronto’s first skyscraper, the 7-storey building was constructed in 1895 to designs by E. J. Lennox, one of Toronto’s most prominent and sought-after architects of his period.

The same decade he finished the Beard Building, Lennox designed a new city hall for Toronto (Old City Hall), the King Edward Hotel, and the west wing of Queen’s Park.

Yet despite his glowing resume, Lennox’s first and only high rise was a financial disaster that was demolished after just four decades of use. Today, only a few pictures and newspaper clippings remain as evidence it ever existed.

The eponymous developer of the Beard Building was merchant George T. Beard, the son of a prominent local family in the St. Lawrence Market area of the city.

Beard was elected a Toronto city councillor in the 1860s and his father, Joshua George Beard, served as mayor in 1854.

The family business was Joshua G. Beard & Sons, wood, coal, and iron stove makers, but the Beards also dabbled in hospitality with Beard’s Hotel, which was located at the northeast corner of Church and Colborne Streets.

A wharf at Front and Jarvis Streets used for the import and storage of the family’s coal was known locally and marked on maps as Beard’s Wharf. 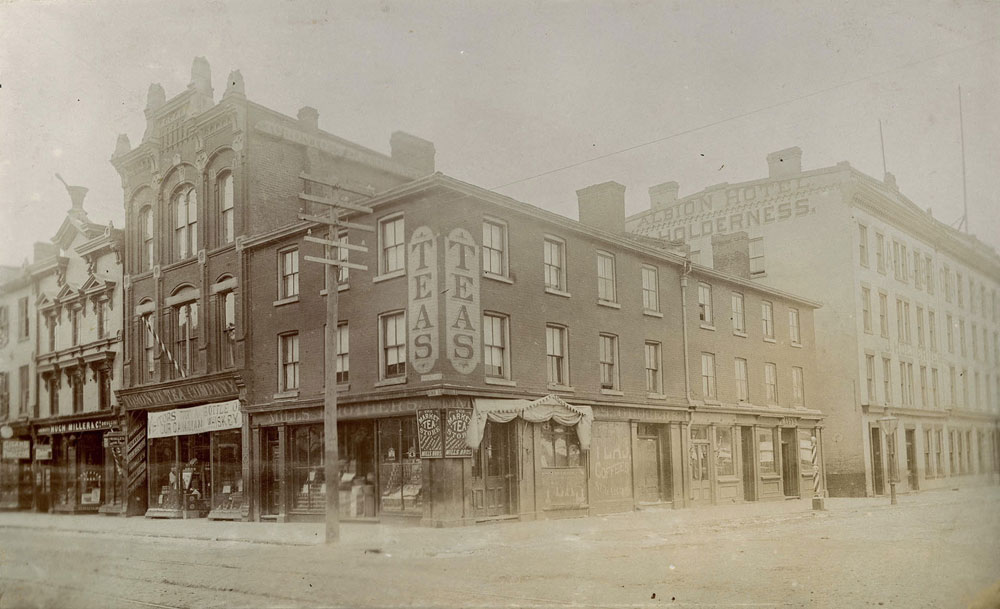 The southeast corner of King and Jarvis streets, approximately two years before construction of the Beard Building. The tower occupied only the lot of the building marked “teas.” Image: Toronto Public Library, B 11-44b.

It’s not clear what inspired George Beard to redevelop the land he owned at the southeast corner of King and Jarvis, or why he decided to commission such a tall structure.

During the 1800s, the city’s business and financial heart had gradually shifted west, making the St. Lawrence Market-area an unusual place to attempt a skyscraper.

Further still, the lot Beard planned to build on was tiny—just 7.3-metres (24-feet) wide and 24.3-metres (80-feet) deep. Prior to the Beard Building, a three-storey corner store occupied the site (pictured above.)

The planned nine-storey building was to consist of a Bank of Commerce branch and licensed bar at ground level with hotel rooms on the floors above. The height would have dwarfed St. Lawrence Hall, located directly across the street.

Despite a gloomy economic prospects, Beard progressed with the project and was issued a building permit in April, 1892.

Around this time, Lennox altered the plan for the high-rise, reducing the overall height by two storeys, perhaps in an attempt to make it economically viable in the worsening market.

A description of the planned building printed in the Contract Record, a construction industry trade publication, gave more detail about what Lennox and Beard were planning.

“The building is to be … of Modern Romanesque architecture, to be executed in the form of an iron skeleton incased [sic] in brick walls, the exterior to be out of cut stone and pressed brick.”

The estimated cost was $60,000 with a large portion of the money from the Anglican church in Toronto. 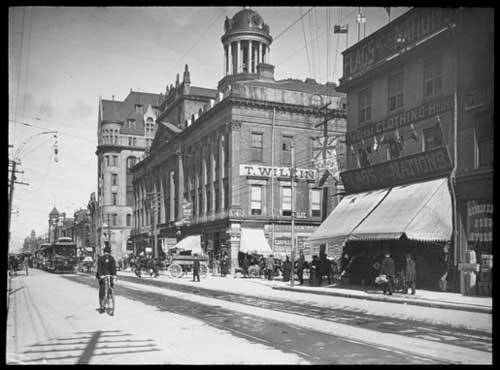 In 1893, while the building was under construction, a financial panic put a heavy dampener on the construction and development business, further clouding the chances of short-term success for the tower.

Nevertheless, the Beard Building was completed in 1895 and the Bank of Commerce leased the main retail space on the ground floor at the corner of King and Jarvis. The hotel component didn’t fare so well—in fact, it never opened, apparently because of Lennox’s design.

“The rooms are too small and stairs too narrow for a hotel,” the Anglican Synod complained in an 1895 report that was printed in the Toronto Star. “It is considered entirely out of place in the locality.”

The space for the bar was also deemed too small and the business also appears never to have opened, hobbling the financial success of the building.

Despite its shortcomings, the completed Beard Building was a handsome and imposing structure. It had a ground floor exterior of rough-cut stone with large basement windows. The corner that faced the intersection of King and Jarvis was rounded and the west elevation was distinguished by large arched windows. The undulating roofline had tall dormer windows that made it easy to identify on the Toronto skyline.

It’s safe to assume Lennox expected the building to eventually be joined by other similarly-sized structures because he left the wall that faced east along King Street completely blank.

In the years that followed, the Bank of Commerce kept its branch on the ground floor while the space above was leased as office space. The city directories list the Lake Simcoe Ice Supply & Cold Storage Co., crockery, and prepared food makers among the tenants.

In the years that followed, Page and Co., a salvage company, and Economy Rubber and Tire Co. leased the entirety of the available space, but neither company stayed more than a few years.

For all its faults, E. J. Lennox seems to have been quite proud of his design.

As author Marilyn M. Litvak notes in her biography of Lennox, the Beard Building appears on the architects official bookplate, along with the Manning Arcade, Old City Hall, and the Freehold Loan and Savings Building.

There are very few photos of the Beard Building, even fewer that show it clearly. Its closest surviving relative is the former Toronto Athletic Club, now the Stewart Building, on College Street at University Avenue.

The two buildings were designed and built around the same time. Although the Athletic Club has larger footprint and is smaller in height, the buildings are similar in appearance with arched entranceways, corner turrets, and other Romanesque details. 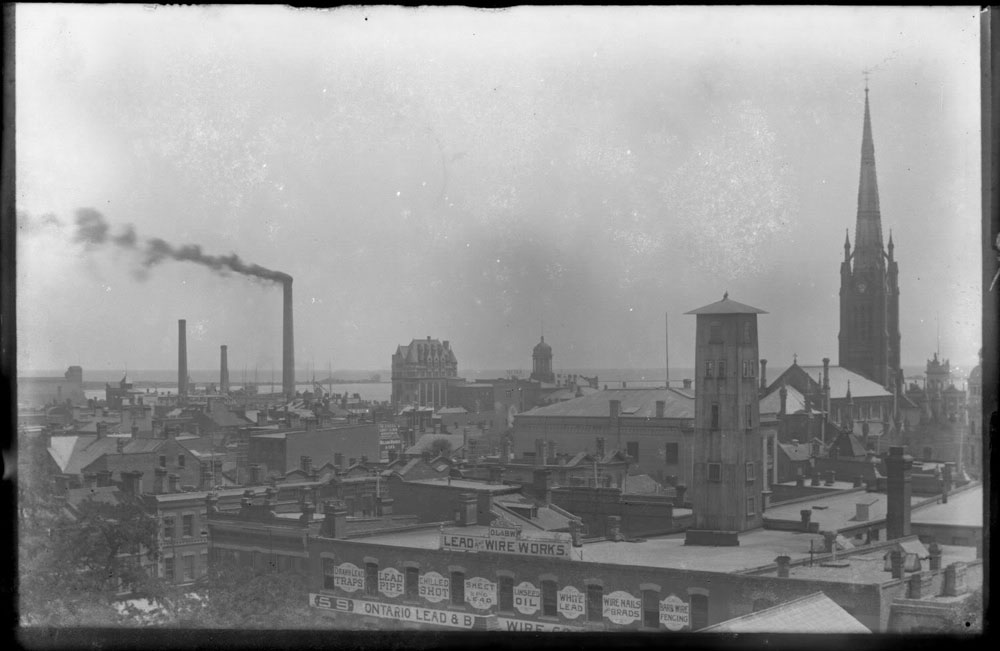 The seven-storey Beard Building (at centre) was among the tallest buildings in Toronto when it was completed. The original plan prepared by E. J. Lennox was for nine storeys. Image: Bibliothèque et Archives nationales du Québec, P546,D9,P55.

Despite its pedigree and prominence on the city skyline, the Beard Building lasted barely 40 years. The start of demolition was reported by the Toronto Telegram newspaper in May 1935.

“Its day is done. In fact its day was done some time ago,” the paper reported. “It has long been regarded as Toronto’s first skyscraper and known to the initiate as Lennox Folly.”

After cracking open its shell, demolition company Teperman and Sons discovered the supposedly iron-framed tower contained no metal skeleton whatsoever, despite Lennox specifically saying it did in his building specifications.

“Its joists and studding and beams and columns are of wood. Its floors are bridges carried by the thick brick walls,” the Telegram reported.

There are conflicting reasons for why the Beard Building came down precisely when it did. At the time, the burden of taxes sometimes prompted the owners of struggling buildings to demolish their structures as a cost-saving measure.

However, a Toronto Star article suggested the Anglican church demolished the Beard Building on the advice of the city to prevent the development of slum conditions.

“Such buildings as the Beard building at King and Jarvis Sts., the former Palmer house at York and King Sts., and similar structures elsewhere have been removed actually because they have outlived their usefulness and become a burden to the land,” said K. S. Gillies, the city’s commissioner of buildings.

“Buildings of an obsolete type must go sooner or later and their removal now is a wise step that will make for a better city.”

Within a few years, the Beard Building had been replaced by a gas station.