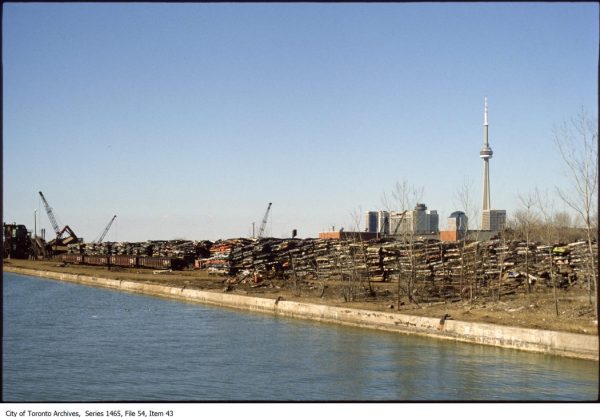 In the heady days of Toronto’s mid-1980s real estate boom, large parcels of land along the central waterfront began rapidly changing hands in what increasingly looked like a free-for-all. The transactions seemed to have been cooked up behind closed doors, with dodgy and opaque approvals granted by the City, sometimes at the behest of well-connected lobbyists.

Developers were collecting tax breaks, cheap loans, and subsidies, and grabbing prime pieces of land upon which they proceeded to build large and view-obstructing condo towers and parking garages. One firm, Huang & Danczkay, emerged as a central-casting villain in this gold rush, and finally found itself, in October, 1986, slapped with a halt-work order on a pair of grim apartment towers on the north side of Maple Leaf Quay.

“All the deals with developers are currently a mystery to all but a handful of managers and directors of Harbourfront, the 90-acre urban park that was to be the jewel of Toronto’s waterfront,” Globe and Mail investigative reporter Jock Ferguson wrote in a story published April 9, 1987.

“Frank Mills, acting president and general manager of Harbourfront, said in a recent interview that there is a need for secrecy to preserve commercial confidentiality. As a result, even City of Toronto politicians and planners are excluded from knowing what is going on at Harbourfront until deals have been completed. Mr. Mills said the secrecy allows the corporation to successfully negotiate with developers for future projects on the waterfront.”

Though firmly ensconced in the receding past, this episode is the scandal that leads directly to today, and the expansive consultation exercise that Waterfront Toronto and Sidewalk Labs Toronto are embarking on as they move towards a proposed master plan for Quayside.

As reports of all the deal-making came to light, Brian Mulroney’s federal Progressive Conservative government put Harbourfront’s development plans on ice and soon established a royal commission on Toronto’s waterfront, to be headed by former mayor and then-Tory cabinet minister David Crombie.

The notion that a succession of stinky land deals should trigger a royal commission seems impossibly quaint and even strange today. But Crombie made full use of the opportunity presented to him, embarking on what proved to be an historic exercise in synthesis. He reckoned, correctly, that those terrible development deals were the symptom of a much larger problem that spread like an ink stain all the way up to the moraines that produced the rivers that flowed into Lake Ontario.

The royal commission, and its 1992 successor, the Waterfront Regeneration Trust, introduced Torontonians to the idea — now accepted, but once considered radical — that the lake and the headwaters and the riversheds in between, and indeed the city in between the riversheds, were all of a piece and needed to be understood as such. It was something Torontonians and their politicians didn’t really do at the time.

Yes, the city had the Islands and the ferries, and so on. But the lake, and especially the central waterfront, had become a giant toilet. No one connected what happened upstream to what happened downstream, and that indifference created the conditions that allowed invaluable waterfront land to be treated like just another development site, and one reserved for the highest bidders.

While the idea of transforming Toronto’s grim industrial waterfront into a shiny playground for tourists and recreation and culture drew the attention of Liberal politicians in late-1960s Ottawa, no one had much of a sense of how to involve people in the process of building such a civic precinct. Developers, however, immediately understood the commercial appeal of waterfront living and moved in, grabbing parcel after parcel until the whole thing collapsed on itself.

Crombie’s work with the royal commission and then the trust aimed to go back to first principles by connecting watersheds to the lake, and Torontonians to both. The planning work focused on creating attractive public spaces, amenities such as bike paths and rejuvenated natural areas. Both sought to involve ordinary people in the work of integrating all these elements. It’s no coincidence that Bring Back the Don and the habit of waterfront-oriented public consultation trace their roots to this time

But the enforced interregnum, while incredibly important in terms of building that early grassroots constituency for waterfront revitalization, came tethered to a dilemma: the waterfront needed to attract private development in order to become a place for people, but the sort of development that was situated within a much broader conception of what an urban waterfront can and must be.

In the late 1990s, Crombie became interested in using an Olympic bid — in this case, for the 2008 summer games — as a means of spurring brownfield remediation across the waterfront and the port lands, and using that investment to foster the development of both public spaces and private buildings.

As the bid gathered momentum, the backers appointed Bay Street financier Robert Fung and planner Tony Coombes to devise a solution to the confounding factor that had precipitated the mess of the mid-1980s, which was the destructive rivalry between the various public agencies that had skin in the game of waterfront development.

Without going into the minutiae of what followed, Liberal prime minister Jean Chretien, Tory premier Mike Harris, and Toronto mayor Mel Lastman cut a deal in 2000 to invest $1.5 billion into the waterfront (whether or not Toronto won the bid), with planning responsibility delegated to a new creature to be called the Toronto Waterfront Revitalization Corp., later Waterfront Toronto.

Because its roots extend all the way back to the bitter mistakes of the mid-1980s, Waterfront Toronto was hard-wired to consult widely, to plan mindfully, and to play the long-game rather than reach for cash grabs.

Which, in the main, this agency has done, and continues to do.

Tonight, Waterfront Toronto and Sidewalk Labs — an Alphabet/Google subsidiary — embark on a far-reaching exercise in public consultation intended to produce a development plan for Quayside, the 12-acre parcel of land at the foot of Parliament, but maybe more than that. Sidewalk has talked a lot about making the city better and using data to achieve that end, but its precise intentions remain something of a mystery.

The road that leads to these consultations began with opaque land deals that the public didn’t, and weren’t meant to, understand. Back in the day, ordinary citizens were explicitly unwelcome in the serious business of re-building the waterfront. The story of the last 31 years, however, is about rolling back that presumptuous and insular approach to city-building.

So if you are interested in the waterfront and if you understand that its well-being is connected to everyone who lives in Toronto, attend these consultations. Ask friendly questions. Ask tough questions. Demand more information. Connect the dots. But mostly, make sure that Sidewalk understands that its business here is your business, because this is your city, not a lab.

The first set of round table public consultations begin tonight, from 5 to 9pm, in Metro Toronto Convention Centre North. Day care will be provided.