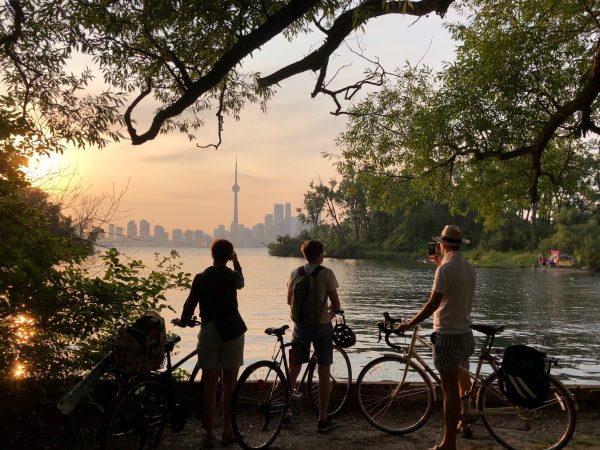 Toronto Skyline as seen from the Toronto Island. June 2018. By Shawn Micallef

Revitalizing our waterfront is the largest and longest-lasting project that we will leave for future generations of Torontonians. Together, under the leadership of Waterfront Toronto, we are transforming formerly forgotten, polluted, derelict lands into brand-new communities for people to live, work, play and visit.

The story of the waterfront in our city goes back millenia, to the First Nations people who lived along the shores of Lake Ontario. Following the arrival of the settlers, the city that we know now also began at the water’s edge.

For over a hundred years, industry defined Toronto’s waterfront keeping residents physically and psychologically disconnected from the water’s edge. A critical turning point was the founding of Waterfront Toronto in 2001 by all three levels of government. It was tasked with a 25-year mandate to revitalize 2,000 acres of waterfront, far surpassing in size similar efforts in Sydney, New York, and Boston.

The result has been nothing short of transformational. Waterfront Toronto has built award-winning parks and public spaces along the waterfront such as Sugar Beach, Sherbourne Common, Corktown Common, Underpass Park, and the playful “wave decks” at the water’s edge. It has helped to build sustainable communities and new affordable housing, such as in the West Don Lands neighbourhood. And it has leveraged $1.2 billion in Government seed funding into $10 billion of private sector investments, resulting in 14,000 full-time years of employment.

Waterfront revitalization is a long-term and complex project, so it will not be finished overnight and it does not happen automatically without hard work. We must continually renew our commitment to revitalizing the waterfront. This means building on the solid foundation already laid by Waterfront Toronto, being clear-eyed about where we need to improve and following through on plans and major works despite short election cycles and changes in government.

Recently, the Auditor General for Ontario released a report that identified a number of areas for improvement at Waterfront Toronto. As public agency, Waterfront Toronto should be held to the highest standard and can do better. But let us be clear: Waterfront Toronto has a 15-year legacy of delivering excellent results for our city.

For this new term of City Council, Mayor John Tory has appointed me as his designate on the Board of Directors for Waterfront Toronto. While the mayor and I may view some issues differently, we are united in our determination to see the agency continue the work of reclaiming and revitalizing the city’s waterfront

Two projects at the immediate forefront of Waterfront Toronto’s work have the potential to significantly change our city for the better.

The Port Lands Flood Protection project will open up nearly 300 hectares of land for revitalization and provide the opportunity for thousands of new jobs and housing units. In the process, 1.4 million cubic metres of contaminated soil will be removed and a new naturalized river valley will be excavated, creating a new island for the people of Toronto to enjoy.

There are few urban infrastructure projects anywhere in the world that can match the scope or ambition of this monumental project.

The other undertaking is the often discussed Quayside district. Waterfront Toronto has partnered with Sidewalk Labs to explore new concepts of what is possible in how we can build our city to be more livable, affordable, sustainable and easier to get around.

Has the project been controversial? You bet. Some of what Sidewalk Labs has shown so far is the first of its kind and scale in Toronto and Canada. A new approach of combining urban planning with more detailed data raises issues of privacy in the context of neighbourhood development that we in Toronto have not ever had a public conversation about before. Let’s have and lead that conversation.

I vow to see that the public’s interests are thoroughly protected as we review all aspects of the proposal for Quayside. Jane Jacobs used to say that communities have a right to say `no’ to things that are going to harm them, but a responsibility to say `yes’ to things that will help. That’s how I’ll approach the Sidewalk Labs debate.

At the end of the day, as a City we have a right to say `no’ to the final proposal if it does not live up to our high standards for inclusiveness, environmental sustainability, affordability and privacy. But we also have a responsibility to say `yes’ if it does. So, together, let’s roll up our sleeves and get to work

Toronto began as a Waterfront City. It truly was our point of origin. Over the years we sadly lost the water’s edge. But, we have finally begun to reclaim it. And, with Waterfront Toronto at the helm, we can continue to build a waterfront for all.

–Joe Cressy is the City Councillor for Spadina-Fort York and a member of the board of Waterfront Toronto. Follow him on twitter at @joe_cressy.