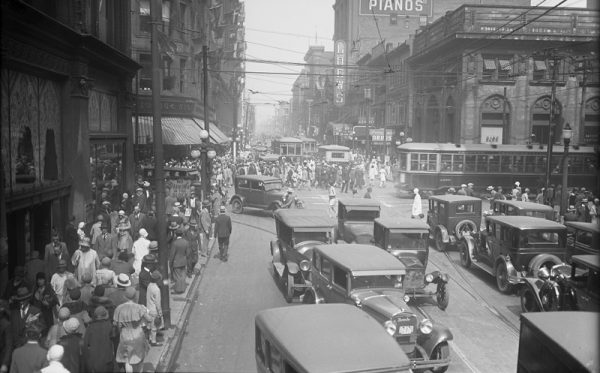 It’s not a coincidence that words for people who understand good etiquette – polite, urbane – are derived from classical words for cities (Greek polis, Latin urbs).

Where once etiquette was thought of primarily as of as something that was aristocratic and applied to private life (imagine Downton Abbey), I’d like to draw more attention to the public etiquette that applies to public life, and start a discussion about how it has been influenced by the experience of everyday people living in cities.

All societies in every part of the world have rules of behaviour, whether the societies are rural or urban, and whatever their form of social and political organization and types of technology. Urban public etiquette is simply one of these sets of rules.

Some of these rules become formalized into laws and bylaws and are enforced by authorities (although these laws are most effective when also backed up by social expectation). But “etiquette” describes that vast range of rules, generally more fluid, ambiguous and changeable, that are not formalized but rather simply learned and enforced through social pressure and expectation.

Since ancient times, cities have been where many different kinds of people are concentrated together. They are full of people who one does not know, and what’s more, these unknown people may come from a wide variety of locations and have different habits, beliefs, and cultures. Often, cities receive a constant stream of newcomers, whether immigrants from the countryside or from other nations, and visitors for business or pleasure. And all of these people are crowded together in the limited public spaces between buildings as they go about their business.

To operate successfully, people in cities need to develop and adopt rules of behaviour that they all understand and follow – and teach to newcomers. These rules are designed to avoid complications, delays, misunderstandings and conflict as people go about life. But, more importantly, they also bring out the positive benefits of city life. They make it easier for strangers to conduct business with each other and learn from each other, and for neighbours to live together in harmony and maintain the public spaces they share as welcoming spaces in which to form community.

Some of the distinguishing features of urban life shape the rules of urban public etiquette. For example:

These rules aren’t necessarily good or bad. There’s a long tradition of visitors from the country thinking city folk are unfriendly, stuck up, and inauthentic – these characterizations are the other side of the coin of urban public etiquette. Nor of course are these rules always followed – what matters is whether there’s an expectation that they ought to be followed. And these rules are never settled – there’s always a range of expectations within a population, and the rules are constantly shifting and evolving in response to changes in the community.

There’s been some interesting recent discussion about the case of European cities, their history, and public etiquette. Scholars who study that continent have long been interested in how European society’s rules of behaviour changed over the course of many centuries alongside its social structures.

Traditionally, etiquette has been thought of primarily in private terms – how people behaved in private spaces such as homes and clubs, and in private events such as dinner parties or receptions. In these cases, etiquette was hierarchical – it was a way of defining how the elite behaved, and the elite used it as one of the ways of defining itself against those below it in the social hierarchy. That meant, of course, that it was also aspirational – something that those who wanted to move up in the social hierarchy sought to learn.

Private etiquette was therefore seen as a top-down phenomenon – one that was defined at the top of the social hierarchy and then gradually worked its way down. The sociologist Norbert Elias, in his book The Court Society, argued that etiquette was a way for European monarchies and states to tame the unstable, violent and often rebellious aristocracy they governed, with a focus on the example of the King of France Louis XIV and his court at the Palace of Versailles. Once adopted by the aristocracy, it was then emulated by those below them in the social hierarchy who aspired to higher social status.

Recently, however, some European historians are seeing a different, or perhaps complementary, source for the evolution of etiquette – in public, city life as well as in private courtly and aristocratic life.

In medieval and early modern European cities, as now, many strangers from diverse backgrounds were constantly thrown together in narrow streets and squares. To find communities of belonging, and manage these spaces, people in cities formed self-governing associations – guilds, confraternities, even city councils – and had to figure out how to make these work effectively (I talk about this a little in Nadia Halim’s podcast The Opposite of Lonely). And, some historians argue, this process of learning to live in and manage the urban environment together developed the idea of civility (derived from the Latin word civis for citizen, or a member of a community) and its rules of behaviour.

In his article “Civility and Civic Culture” (in Civil Histories: Essays Presented to Sir Keith Thomas), the British historian Jonathan Barry argues that what became the concept of “civility” – gracious, harmonious and non-violent interaction – originated in cities. He argues that it was taught, not through books, but through urban life:

“urban freedom provided an alternative education in the modes of civility, one embodied not in books so much as in institutions and practices embedded in urban life, but all the more effective for that”.

Barry focuses on the impact of public-private spaces – associations, inns, and coffee houses that were part of public life even if taking place in only semi-public spaces. But  I would suggest that interactions in fully public spaces – streets and squares – were equally important in developing this etiquette of civility, and that this etiquette shaped fully public behaviour as much as it shaped behaviour in those semi-public spaces.

In this model, etiquette in public life – whether in the streets or in associations – was shaped not by a top-down model but rather horizontally, by peers. Fellow city-dwellers of similar status evolved rules for working and living together in a crowded environment, and propagated them by example, education, observation and, if necessary, criticism.

For example, in his book Society in Early Modern England: The Vernacular Origin of Some Powerful Ideas, another British historian, Phil Withington, notes how, in 1576, John Barston, the town clerk of Tewkesbury, wrote that “by observing the decorum and comely behaviour in particular degrees of fellowship, the common preferment of all may be more easily perfected”. And Withington cites another writer who, a decade later in 1586, took the word “urbanity” to mean “civil, courteous, gentle, modest, or well ruled, as men commonly are in cities and places of good government”.

This kind of public etiquette was especially a feature of the emerging middle class – people who practiced skilled trades, commerce, or professions like medicine and the law – who lived and worked primarily in cities. They are often referred to as “bourgeois”, which was originally a French word for someone who is a citizen of a city (bourg is an old French word for a town). As this group of people became ever more wealthy and influential over the course of the modern period, their norms of behaviour – their etiquette – also became more influential in their society. They were also influenced by aristocratic private etiquette, of course – but one could argue (as Jonathan Barry does) that the influence went both ways.

When rules of etiquette were written down, however, the focus was almost always on private etiquette – the most aspirational and difficult-to-know type, and the one that readers of these books might be less familiar with and most eager to learn. Public etiquette was something city-dwellers were already familiar with from experience through sharing public spaces in the city, so it didn’t need to be written down to the same extent.

One of the first people to really focus on urban public etiquette was the sociologist William Whyte, who was interested in observing it (rather than teaching it, the way etiquette books did). In his movie “The Social Life of Small Urban Spaces” and later his book of the same name, he watched how people behaved on the street and plazas of New York City and gleaned the rules of behaviour they followed. My book, the Toronto Public Etiquette Guide, was a more lighthearted attempt to follow in those footsteps.

As I noted in my introduction to that book, discussion of public etiquette is a combination of descriptive – what people do – and prescriptive – what people think you should do (even if they don’t always actually do it). That dichotomy emerges from Whyte’s observations – for example, Whyte notes that people love to stop and talk with friends at the heart of the action, right in the middle of the sidewalk or in front of entrances. It’s where people who know each other likely crossed paths, and they don’t want to break the spell of camaraderie by moving from the spot. But if you ask people, many will say that people who are stopping on the sidewalk should always get out of the way of people who need to get somewhere – even if that’s not what they’d actually end up doing in the same circumstances.

Public etiquette is always evolving. Historian Peter Norton, in his book Fighting Traffic – The Dawn of the Motor Age in the American City, describes how public etiquette around the use of cars on the street was deliberately shifted by the motor industry and drivers. Where originally it was assumed that the newly invented motor vehicle should defer to pedestrians on streets, the invention of the concept of “jaywalking” in the 1920s turned that around to propagate the idea that people on foot should stay out of the way of motor vehicles. Interestingly, this campaign was built around the idea of urban public etiquette – “jay” was a term for someone from the country who didn’t know how to behave in the city, and so the campaign used the idea that there’s an “urban” way to behave on the street to give itself legitimacy.

Public etiquette continues to evolve to keep up with changes in society and technology. We are still trying to figure out the etiquette for our new technological public spaces – social media – in the same way people in the expanding cities of the European Middle Ages had to learn to deal with their evolving social spaces. Likewise, in “We’re going to live in a world of bots. They need to be polite”, University of Toronto law professor Gillian Hadfield points out that artificial intelligence in all its forms – whether it is an electronic assistant sending emails or talking on the phone, or a delivery robot on city sidewalks or a self-driving car – needs to learn not just laws, but all the “silly rules” – in other words, the etiquette – that govern human interaction if it is going to operate effectively in human society. (Although one can also imagine AI companies trying to change human rules of behaviour to suit their needs, just as car companies did in the early 20th century).

Someone is going to have to teach these rules to the bots, and to do so, we humans may have to take another look at ourselves and become more conscious of all the unspoken rules we’ve developed over the centuries to successfully share our public spaces.

Photograph from the City of Toronto Archives