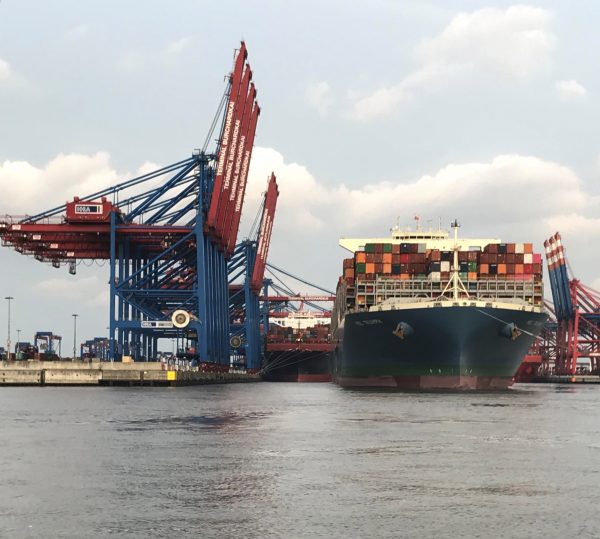 Cities can have ports, and many do. Moreover, successful ports make for thriving cities.

As part of my recent trip to the International Transport Forum in Leipzig, I also got a visit to the Free and Hanseatic City of Hamburg, which hosted media for a few days to show us their many innovations in the area of transportation.

Hamburg is a city of 1.8 million people, with a metro region area population of about 3.6 million. It strives to be a model city for all forms of mobility.

The port of Hamburg is the third-largest in Europe. It can handle the biggest container ships in the world – which are even larger since the financial crisis when, in the interests of reducing the per-unit cost of transport, shipping companies increased the size of their largest Panamax ships, of around 300 metres, to the New Panamax ships of 400 metres.

However, Hamburg is not on the North Sea, but over 100 kilometres inland on the Elbe River. Since the nineteenth century, they have repeatedly dredged the river to accommodate bigger and bigger ships. They are still doing it today. The river is now more than three times deeper than it was in 1860.

During our visit to Hamburg, we got to go out on the river to see the port facilities and watch the turning of the MOL Triumph, which is tied for the ninth-largest container ship in the world. It is 400 metres long. If you put it on Queen Street, it would span the distance from Yonge Street to City Hall.

Fully loaded, this class of ship can weigh 200,000 tons. They are bigger than many office buildings.

Here is a video of the Triumph, taken by my colleague John Tenpenny, the Editor at Canadian Shipper:

The port is impressive. The loading system in Hamburg is entirely digitized. Human beings do not set foot in the yards. Every container in the world has a unique code, and attached to that code are its contents, origin, destination and route. The computer knows where each container is going and when, and determines where to store the container on site so that it is in the ideal location for reloading. Minimum movement of containers, maximum efficiency.

The scale and complexity of it is hard to wrap your mind around. It’s brilliant. Hamburg is deservedly a leader in logistics.

But it is not the model for managing traffic or any other movement in the city.

Hamburg is proudly tech-forward. Much of what we were presented with was tech, and mostly auto tech. Automated Vehicles (they have a test track), shuttles, ride-sharing apps, taxi apps. Maximum efficiency.

Digitized efficiency can make a great contribution to mobility planning and practice. It has a role to play. It becomes a problem if it’s in charge, or becomes the model for how we should move.

It comes down to something that is fundamental to human mobility in a city: our movements are so much more random. We all have our routines, but at any moment, we might change direction, even for no discernable reason. And that randomness is key to innovation in the city. It’s why cities are veritable petri dishes of innovation.

Efficiency does not breed new ideas.

Sometimes we call it “serendipity”: the chance meeting that becomes the friendship, relationship, business deal, employment opportunity that takes your life in a new direction. Cities are designed to enable such encounters.

Urban serendipity can start with curiosity or even inconvenience. Something that takes you out of your way, on a path other than your usual routine, and leads you to a new discovery. It could be as small as a nice view or a new bakery you didn’t know was there.

It can sound trivial but randomness, this freedom to change direction, is fundamental to our well-being and human development. These are the movements and discoveries that bring us life, help us grow as individuals and as a society.

To try to systematize them like the containers in a port is not only impossible, but counter to that which makes a good, livable city. We have to think carefully about how we integrate efficiencies into our lives and our spaces.

There are limits to running a city (or any government) like a machine. A city is not a port. Efficiency has its place, but tech will kill a city if it’s allowed to take over.