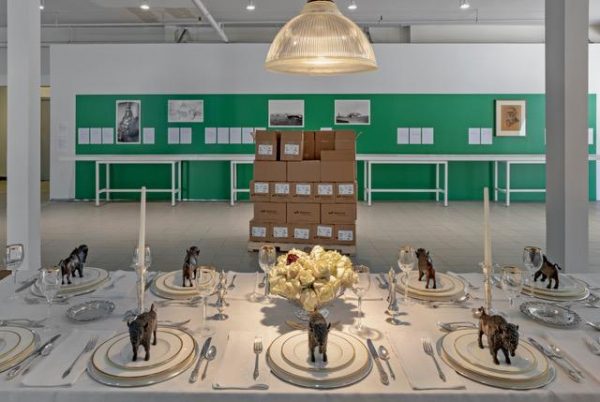 It’s an exciting time for Toronto. There is a sense of possibility that has always been here but is now manifesting in tangible ways. New models of relationality and connectivity are emerging that have the potential to change how we understand ourselves and our city. If anything is indicative of this shift, it’s the Toronto Biennial and this year’s Nuit Blanche.

Much of this sense of excitement and possibility stems from Toronto’s reckoning with itself and its relations to others. The tenuous contrast between relation and isolation, between connectivity and dysconnectivity, is a central theme for both the Biennial and Nuit Blanche. Taking into consideration our current historical context, these decisions make sense. In a time where, like never before, we must view our present decisions in relation to the future, the question of how we stand in relation to each other should be at the forefront of our minds.

Curators Candice Hopkins and Tairone Bastien have used Toronto’s premiere Biennial—entitled “The Shoreline Dilemma”— to focus on the multifaceted tensions at play in our relationship to the waterfront. In the 2019 Biennial handbook, Hopkins and Bastien highlight how Toronto’s waterfront has undergone immense cultural, environmental and topographical changes. Once a place of trade and ceremony, the waterfront is now a site of dense condo development, forgotten military bases and contradictory attempts at ‘re-naturalization.’

Because the shoreline’s perimeter is ever-changing and, in turn, difficult to map, Bastien and Hopkins have identified a kind of breakdown in logic and categorization spurred by these fluctuating elements. For Bastien and Hopkins, the waterfront’s evasion of quantification and its ongoing transformation has the capacity to foster new relationships both with ourselves, each other and our environment. Since we can no longer reduce our surroundings to conventional methods of understanding, new ways of seeing and relating to each other is made possible.

This year’s Nuit Blanche theme, continuum, and the accompanying Nuit Talks series entitled “A line is a series of points, connected,” also allude to a sense of relationality. As Rebecca Carbin, the curator of Nuit Talks, explained, a line is not merely a steady, linear progression in time. Instead, lines are made up of points, points that indicate moments of pivotal decision making. When looked at from afar, it may seem as if a line could have only ever gone in one direction (i.e., that things could not have been otherwise). But when looked at closely, we see that this linear progression is constituted by moments of agency that have in turn shaped the continuum we see today. In other words, there is a relationship between each moment (or point) in the line, for no moment could have existed without the other. 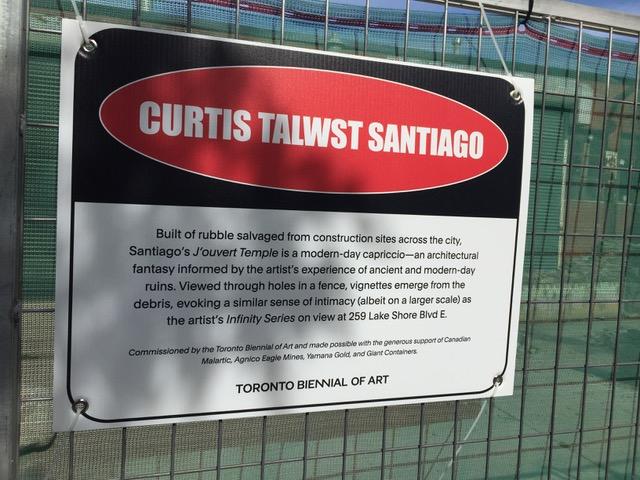 This notion of connectivity can be seen in varying manifestations at both the Biennial and Nuit Blanche. In the former case, for example, artist Curtis Talwst Santiago looks at the connection between vast historical networks. Described as a ‘modern day cappricio’ and located along the Port Lands, Santiago’s mixed media installation J’ouvert Temple is an ancient-urban ruin. The artist has combined elements of Western European representations of ruins (using rocks from the Leslie Spit), along with elements of African culture and nods to his Trinidadian heritage (indicated by the painted red rocks). In using materials from the Leslie Spit, and by combining all these different traditions, Santiago draws connections between seemingly divergent timelines and geographies. We are, therefore, made to think of our own city in relation to other lands and histories, as well as the possible links that underpin these relationships.

While Santiago’s work makes connections across space and time, other pieces on display interrogate the nature of connectivity through the lens of environmental change. The New Mineral Collective (or NMC), whose work is also associated with the Biennial, addresses our relationship to the earth by focusing on landscape politics and “geo-trauma.” On Saturday, October 5th, the artist collective, along with WalkingLab and RiVAL, will be conducting a tour of the Financial District in which viewers will learn about the history of the land, the people that once lived there, and the corporations/business that now occupy it. In this tour, NMC will provide ‘audio therapy,’ guiding listeners through Canada’s links to extractive industries responsible for displacement and environmental deterioration. In this piece, the connections fostered are between the living and the dead, the land and its inhabitants.

In his new art installation for Nuit Blanche, Director X also addresses environmental change, but on a massive historical scale. Seen as a continuation of his acclaimed 2016 Nuit Blanche piece Death of the Sun, X’s new piece Life of the Earth traces the world’s history from the time of Pangea to 100,000 years in the future. Using a replica of the globe and projections that range from CGI images to news clips, the purpose of the work is to interrogate what a mass extinction due to climate change might look like.

“At its core,” said X, “the work is taking the worst situations and putting them up.” X has a specific purpose for doing this. Because so many fictional narratives end in problems being resolved and order restored, X worries that peoples’ understanding of the climate crisis will be skewed by this pervasive story arc. However, because he is so acutely aware of the power of narrative, X sees how he can wield this to his own advantage. On his view, you can’t have truth without fiction. In other words, in order for people to understand the science, the facts must be packaged in a narrative or artistic form that makes connection possible. Here we see the moment when the artist can change the direction of the line—to be the ‘point’ that determines the trajectory. For it is through art that we may come to understand, rather than merely know, the realities of climate change. 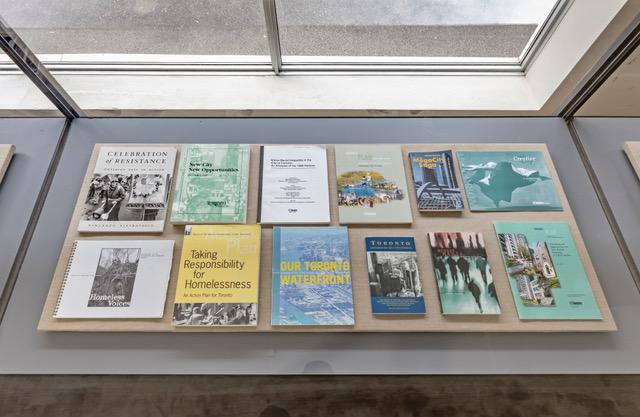 The power of narratives and the ways they connect us is a pervasive theme throughout both the Biennial and Nuit Blanche. Luis Jacob’s “The View From Here,” a two-part installation located at 259 Lakeshore Boulevard and Union Station, displays and investigates different maps and books on Toronto that have been published at various points in history. These documents demonstrate the constructed nature of place and the way in which these narratives shape our relationships to each other and our surroundings. In contrast, Ebony G. Patterson’s video installation for Nuit Blanche entitled “…three kings weep…”, brings into question the narratives surrounding black male bodies and the ways in which these tropes shape the way black men are treated by institutions. At the end of Patterson’s piece, the three weeping men crown themselves using different accessories, thereby becoming the agents of change that shift their own narrative trajectories.

With the birth of new relationships comes the confrontation of old ones. Adrian Stimson and AA Bronson’s art works at the Toronto Biennial are good examples of this. The relationship between the two artists is not solely defined by the present, but profoundly shaped by the dynamics between Bronson’s great-grandfather, a missionary sent to ‘educate’ the Siksika nation, and Stimsons’s great-great-grandfather, who at the time of the missionary’s posting was the nation’s chief. AA Bronson’s “An Apology to Siksika Nation,” demonstrates that new relationships hinge on the reconciliation of old ones.

Indeed, if anything ties all of these disparate artworks together, it is this very theme: that the relationships and decisions we make today are not closed systems, but have expansive reverberations that span different spaces and histories. Keeping this in mind, Toronto’s first ever Biennial and this year’s Nuit Blanche should be seen as ushering in a new moment in the city’s history, a ‘point’ at which real connection and change is possible.