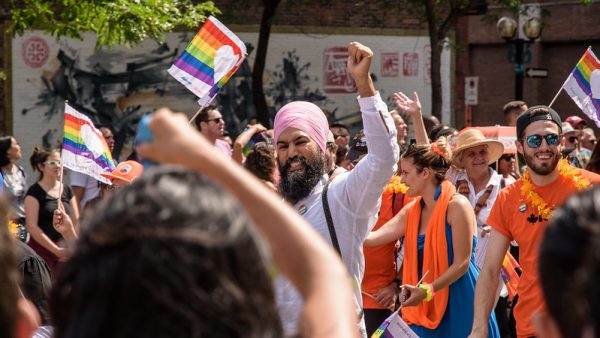 In 1990, Norman Inkster, then the commissioner of the Royal Canadian Mounted Police, recommended to the federal government that Sikh Mounties be allowed to wear turbans as part of their uniforms.

At the time, according to media reports, fewer than a dozen Mounties were of Sikh descent, and none had pushed for a reform that sought to bring the RCMP’s policies into compliance with the 1982 Charter of Rights and Freedoms. Looking back on the subsequent public response, it’s not difficult to see why these men hesitated. The proposal ignited a fiercely racist backlash, with one anti-turban petition attracting tens of thousands of signatures in Alberta.

Thirty years ago, Canada’s 130,000-strong Punjabi community was mostly clustered in a few suburban enclaves in Ontario and B.C. In the Greater Toronto area, many worked in and around Pearson International.

To most non-South Asian Canadians, however, the word `Sikh’ carried a toxic association with the Punjabi-Hindu conflicts in India that culminated in the 1985 bombing of Air India 182, the largest mass murder in Canadian history. The subsequent investigation and trial were botched, and only one person, a B.C.-based nationalist named Inderjit Singh Reyat, did time. But thanks in part to countless media repetitions of the incendiary phrase “Sikh terrorist,” an entire immigrant community bore the brunt of the guilt of a handful of extremists waging a sectarian war.

Inkster’s decision, in short, came with a complex back story. Despite all that, Progressive Conservative prime minister Brian Mulroney and his solicitor general Pierre Cadieux, held their ground. Mulroney called out the backlash as “racist.” “There used to be signs on the lawns saying, ‘No Irish and Catholics need apply,’” he told The Toronto Star in March, 1990. “Later it became, ‘No Italians and Catholics.’ Today, it’s other groups that are suffering from prejudice.”

Soon after, the RCMP changed its uniform regulations, and the following year, Baltej Singh Dhillon, a Malaysian-born Sikh who moved with his family to the Lower Mainland in 1983, became the first Mountie to wear the turban while on duty, a move that must have required, given the outpouring of vehemence, tremendous courage. He retired earlier this summer, at age 53, after an exemplary career that included stints on the taskforce that re-investigated the Air India 182 bombing.

As we staggered to the end of this grim and tedious election, I have found myself thinking about Dhillon’s exceptional bravery all those years ago, and its relationship to NDP leader Jagmeet Singh’s gusty and impressive performance in the past several weeks. Both men defied the haters, blazed trails, broke glass ceilings, and created role models that will deliver many dividends in the future.

They each changed Canada and we owe them our unqualified gratitude.

It is, moreover, crucial to recognize how Canada got from Dhillon to Singh, but to also ask difficult questions about whether things have actually improved in these past 30 years, especially given the insidious role that Quebec’s Bill 21 has played in this election and, more generally, in Quebec under Premier Francois Legault.

Dhillon didn’t set out to be a game-changer; he was a 24-year-old who wanted to be a cop. But through the act of literally altering one of Canada’s defining icons, Dhillon effectively carved out a vast amount of space for Sikh Canadians and other visible minorities to aspire to a host of other domains: provincial and municipal law enforcement, politics, business, even sports colour commentary.

None of this happened on its own. The RCMP’s rule change had to be upheld by successive court rulings and human rights tribunals. The force changed other policies, decreeing, for example, that Indigenous officers could wear braids. Other police services fell in line, altering their own uniform codes.

Whatever else you might think about law enforcement, I’d argue the significance has been massive. After all, if culturally conservative police agencies can make space for conspicuous expressions of diversity, like turbans, then other, more liberal institutions may become less hesitant to follow suit. One need only look at the political successes of Sikh Canadians at all orders of government (e.g., Liberal defense minister Harjit Sajjan, former B.C. NDP leader Ujjal Dosanjh) to see the ripple effects of Dhillon’s 1991 decision.

I certainly don’t want to suggest that such shifts have eliminated racism, either inside these institutions or in Canadian society more generally, because they haven’t. There are too many examples to enumerate, running the gamut from shocking incidents of hate-fueled violence to all those unsubtle dog whistles emanating these days from populist politicians on the right. Justin Trudeau turned up at a costume party in brown face fully a decade after Dhillon was sworn in as a Mountie, and then claimed, during this election, that he didn’t know he was doing anything wrong at the time.

Jagmeet Singh, of course, knows this story as well as anyone, and, I’m certain, could see with great clarity the subtext behind the early media criticisms about his leadership, the vertiginous drop in NDP donations, and the off-handed ways in which so many people (myself included) wrote off his chances in the 2019 race. He may have been Canada’s first ever non-white federal party leader. But could he deliver? “Like it or not,” commented Fatima Syed in The National Observer following Trudeau’s brownface scandal, “the 2019 federal election has always been about race, but as quickly as it comes up, it’s been swept away or worse: it’s been left hanging in a void of no accountability.”

In the face of so much skepticism, Singh and the NDP leadership leaned in, nominating a strong and conspicuously diverse slate of candidates in strategically important ridings. And then he did what so many people of colour have been forced to do in their own lives, which is to be twice as good as everyone else.

Singh’s engaging performance, both in the debates and on the hustings, is now well documented. He’s offered himself up as a leader who is open, candid, cogent, good-humoured. Most apparent in the NDP’s surge is that he and his team presented a welcome juxtaposition to Andrew Scheer’s icy weasel words and the hollowness of Trudeau’s stagey virtue-signaling.

But what I also saw in Singh in this race was his hustle and stick-with-it-ness. Like so many newcomers or racialized Canadians — and definitely unlike his entitled rivals in the big parties — Singh has had to fight for much of what he’s achieved, and it shows. On the campaign trail, he frequently trotted out well-worn union-hall applause lines about the struggles of working people, but the chaos of his early years – family strife, sexual abuse, racist taunts, and financial uncertainty — suggests he’s not just mouthing words.

While the post-election analysis will eventually answer many more questions about the NDP surge, I have wondered in recent days just who was jumping on the NDP/Singh bandwagon besides won-over progressives. It would hardly surprise me, for example, if Singh’s popularity skewed younger, racialized, suburban — in short, a reflection of the Raptor’s fan base, whose ranks, it’s worth noting, included a team of young Muslim women who pitched the team and Nike on branded hijabs designed for athletes. Indeed, in a year when Raptor’s superfan Nav Bhatia, a Mississauga Hyundai dealer who’s never missed a home game, became a national celebrity for his infectious enthusiasm, it is perhaps not a coincidence that Singh saw his popularity take flight.

But let’s also acknowledge the role of fate, and, in particular, the fact that a law banning Quebeckers from wearing religious symbols in public spheres landed, like a bomb, in the midst of the first Canadian election featuring not only a racialized leader, but one whose cultural practices would be directly impacted by the policy.

Quebec’s “accommodation” debate goes back many years, of course. As Global TV political commentator Supreya Dwivedi points out in The Walrus, this fight can be traced in part to a 2006 Supreme Court ruling on the case of a Sikh student in Quebec who sought to wear the kirpan, a ceremonial dagger, under his clothing to school. But there’s little doubt that if we pull the thread a little harder, the Bill 21 story arcs back to Baltej Singh Dhillon and the societal changes unleashed in part by the RCMP’s 1990 uniform change.

In sharp contrast to Mulroney’s clarity about the backlash, all the parties, including the NDP, waffled on whether the federal government should intervene in the appeal of Bill 21, Dwivedi writes. While Singh spoke in deeply personal terms about the impact of such laws, she argues that the NDP’s stance remained hedgy:

“His inability to commit to a clear stance on the issue — a bare-minimum standard — is disheartening. Whether fair or not, as an amritdhari or baptized Sikh, Singh was always going to be presented with challenges in Quebec that no other current leader would face. Given how long this debate has been percolating, it is rather odd that the NDP was not better prepared for this fight, especially since Singh himself is quite outspoken on issues of human and minority rights.”

This isn’t the first time Singh has been smacked around in the media for his political choices — he was vigorously assailed by CBC correspondent Terry Milewski for failing to speak out about the Air India bombing — nor will it be the last. As we head into an uncertain post-election period, Singh, like all politicians, will make mistakes, fumble, back-track. He will be called out and he will also disappoint some of his most avid supporters, as they all eventually do.

Still, Singh’s post-election presence will be substantively and historically different than the role he played going into this race. Through this campaign, he showed that a racialized party leader could not only run, but win over voters in ways that few people, including those in his own party, expected just months ago.

As Dhillon did for Singh, Singh created space for others we have yet to meet. In an election that disappointed in so many ways, he was first past the post.