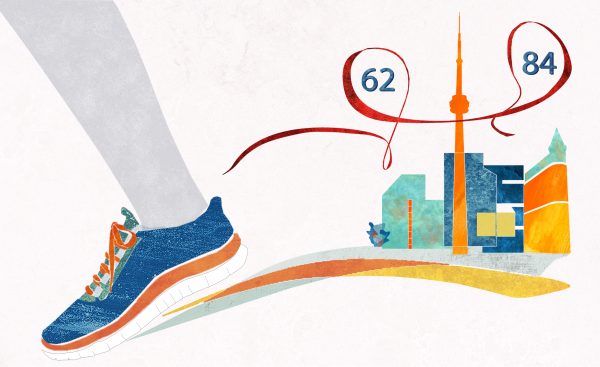 There’s a lot of research that focuses on the walkability of Toronto neighbourhoods. However, there has been little conversation about mapping the “runnability” of the city. In 2013, Toronto was ranked the second most walkable city in Canada. Like walking, running is a healthy and stimulating form of exercise. It is also becoming a viable and safe form of active transportation that assures convenient access to all of Toronto.

Given the growing interest in running and the expanding network of runners, it is time that we develop a new tool for city builders to evaluate the runnability of Toronto neighbourhoods. On the model of Walk Score, which measures walkability, we could think of this new runnability index as a “Run Score.”

“Runnable streets are one of the best attributes of a city” says Jim Creeggan, bassist for the Barenaked Ladies, and a former varsity runner at the University of Toronto. Running, like music, is a stimulating pastime for Creeggan. In fact, one of the first things he does when he arrives in a new city on tour is to go for a run.

Creeggan says that what makes Toronto so great for running is that you can run from your door and promptly arrive to a great network of trails within 10 minutes. In some other cities, by contrast, he has to bike or drive to a nearby trail before starting his run.

Toronto’s extensive trail network provides an escape from the downtown hustle and allows runners to run by the water, or in parks where they can experience the city’s natural landscape and get away from vehicles.

For those who enjoy the urban experience, running allows you to cover more ground than walking, while simultaneously discovering city streets. One way that Creeggan enjoys exploring Toronto neighbourhoods is by navigating the city’s extensive laneway network, which he calls as “Alley running”. As well as its numerous health benefits, running can be a sustainable way of getting to know the city.

Measuring runnable streets would use some measurements like road connectivity and safety that are similar to Walk Score. But scoring runnability might also consider new factors that are based on how convenient it is for people to run in that area.

In particular, a run score could highlight areas in the city that have access to running facilities and well-maintained trails. It can also consider the topography and speed limits of a neighbourhood.

The runnability of each neighbourhood in Toronto would be scored and then mapped accordingly. A score would range from 0 (not runnable) to 100 (perfectly runnable). The maps developed by a run score could help city planners to evaluate areas of Toronto that need better infrastructure that supports public health.

A benefit of creating runnable neighbourhoods could be increasing the number of residents who run to or from work as part of their daily commute. Like walking and cycling, running is a healthy activity that allows you to commute on your own terms and not rely on the schedule of public transit. A run score will help commuters determine the most accessible running routes and shed light on an often overlooked type of active transportation.

Runners could also get more involved in city building by informing policy-makers about what components contribute to a runnable city. Perhaps a runnability index could motivate more people in high-scored areas to run, and engage runners to advocate for change in low-score neighbourhoods. At any rate, a run score would certainly help runners determine the safest and most convenient areas of the city to run.

Mapping the runnability of streets would provide additional material for urbanists who are focused on building a healthier city. It would also serve as a new tool for residents to determine neighbourhoods that support an active lifestyle. Running, like walking and cycling, is complimentary to creating a sustainable city and needs to be included in the public health discussion. Its success speaks to how much the City cares about the experience and health of its citizens. A run score would help push Toronto into becoming one of Canada’s leading cities for building healthier neighbourhoods.