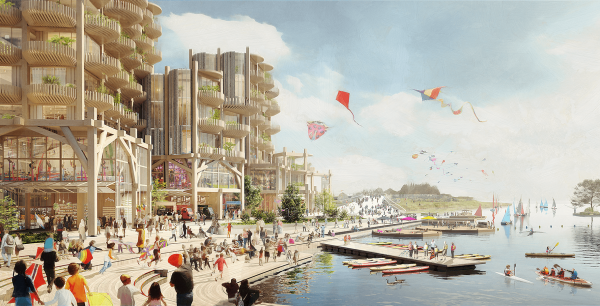 From the earliest days of Sidewalk Labs’ bid to establish a beachhead on Toronto’s waterfront, the cultural mismatch, for lack of a better term, was always very much in evidence but never fully acknowledged as the determining factor in the fate of the company’s bid to build a new type of smart city.

Contrary to what the company’s defenders will say, Toronto’s reaction wasn’t simply an instance of left-ish knee-jerk discomfort with a brash and deep-pocketed suitor from away. Toronto, after all, is a place that’s being constantly re-invented by international business, newcomers and the dreams of ambitious entrepreneurs in emerging sectors. Without Sidewalk’s help, Toronto has become a global hub of not just traditional capital – mining finance, banking, food processing — but also the new forms of investment – in artificial intelligence, biotechnology, fintech, to name a few — that are up-ending incumbent industries both here and abroad.

Circa late 2017, when Sidewalk arrived, this city was most assuredly not a fortress full of suspicious hermits, fending off foreigners and their unwelcome ways.

Nor is it now.

But Toronto, for good or ill, does have a sturdy if under-stated political culture that operates at a very different pace, and with sharply different accountabilities, than anything found in New York and the Bay Area. And for all its slick and costly civic foreplay, Sidewalk only came to this realization late in the game, and, evidently, could not accept it as the basis of a long-term relationship.

Not enough has been said, in my view, about the contrasting forms of municipal governance in New York and Toronto, and the role this one difference has played. New York, like most American cities, has a strong mayor system, with the chief executive wielding enormous influence over the operations and policy apparatus of the city. This, crucially, was the world Sidewalk CEO Dan Doctoroff knew from his time as Mike Bloomberg’s right hand.

In New York, mayors can get stuff done quickly. Bloomberg’s administration established a new technical university on city-owned land on Roosevelt Island to make up for what he and his advisors saw as a gap in the city’s post-secondary/tech industry infrastructure. He provided all sorts of leeway and political cover for transportation czar Janette Sadik-Khan to make dramatic and abrupt changes to road allocation and public space across New York. Bill DeBlasio, shortly after his election, set in motion a vast affordable housing building program worth billions.

Of course, New York isn’t an autocracy, and city council isn’t merely a political Potemkin village. But Doctoroff’s experience with mega-projects like the Hudson Yards is that the mayor’s office enjoys a great deal of both symbolic and formal influence. There are fewer steps between intention and execution.

Toronto’s political culture, as we all know, is far more decentralized and ponderous. The mayor has more informal clout than a city councilor, but is still just one vote in a collective decision-making body. We have nothing that remotely resembles a city charter. Our co-mingled relationships with the upper orders of government are completely different than what exists in the U.S. And even structured attempts to streamline decision-making – and Waterfront Toronto is, of course, an embodiment of that kind of thinking – tend to be either cautious or circumscribed or both. There are lots of deciders, not least the highly experienced civil servants who make it their business to defend institutional interests.

Former Waterfront Toronto CEO Will Fleissig — who, in early 2017, ordered the RFP that put this whole melodrama in motion — was clueless about the city’s political culture, and, more specifically, the deep history of why the agency existed in the first place — two critical mistakes. Consequently, he attempted to perform a graft with incompatible tissue and then couldn’t figure out why it didn’t take.

Point is, local history matters, and rarely has that lesson been more in evidence than during this extended debacle. About a year in to the process, I asked a WT executive if they understood why the agency’s culture of consultation and transparency was so foundational, and not merely procedural wallpaper. They didn’t.

Indeed, Fleissig had blithely zapped the institutional memory in favour of a culture of boosterism and techno-babble that may have played well in San Francisco but offered nothing useful to the Torontonians who were deeply invested in the generational city-building project that WT has been mandated to carry out.

Doctoroff, for his part, arrived with an executive team and a set of lobbyists who assured him that getting to yes in a city besotted by the tech industry’s cash would be like taking candy from a baby.

Here are the steps. Follow them and you’ll get what you want.

Yet when they began to get bogged down in opposition and skepticism, the Sidewalk crew and Fleissig didn’t bother to internalize what, to my mind, was the single most defining moment in the city’s recent past, which was the resounding defeat of then councilor Doug Ford’s cynical 2012 bid to hijack the Port Land’s planning and development process.

That episode demonstrated that Torontonians feel a sense of ownership towards the waterfront that runs far deeper than either Fleissig or Doctoroff realized. All that lakefront land wasn’t just a bunch of brownfield waiting to be claimed. It wasn’t for sale. And it wasn’t some kind of zone for experiments.

Sidewalk’s assumptions about the city’s willingness to bend to its tech-informed neo-liberal will continued to be apparent in the encyclopedic document it released last summer, which included proposals to establish quasi-private forms of governance for Quayside – ideas that WT chair Steve Diamond shot down even before they were made public.

Even after the apparent detente between WT and Sidewalk late last October, the company continued to grumble about not being allowed to test its technology on the wider canvas of the Port Lands. The company couldn’t seem to accept the reality that the city’s decentralized political culture will, in fact, determine the form of what happens on the waterfront.

What’s more, Alphabet, this gigantic corporate blob whose cash and influence encircles humanity, couldn’t accept that a bunch of measly municipal agencies insisted on dictating terms, and so it has left, in what looks — to me — like a huff.

There are deep lessons to be learned here, and I hope that whomever comes along next with city-building visions for the waterfront has the good sense to internalize the back story and take heed of the politics.

As the old saying goes, history repeats itself first as tragedy and then as farce. Hopefully, with the next suitor, it will be a case of third time lucky.