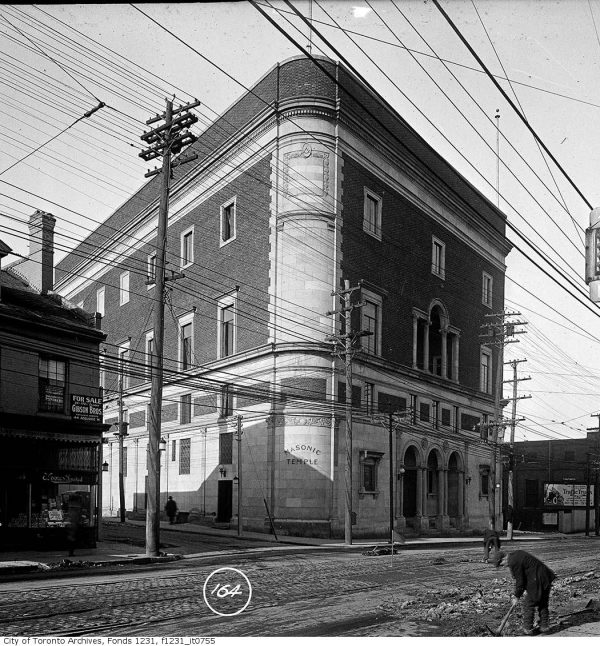 This advice might have come from someone’s older brother, or more likely someone’s older sister. My friends heeded these sage words from our teen elders, splitting school as soon as we could, taking the hour-plus transit ride downtown from the suburbs to be the first in line.

In the alternative-music era of the ’80s and ’90s, there was no place was more exciting to see a show than The Concert Hall. Located inside the historic Masonic Temple, at 888 Yonge Street on the north-west corner of Davenport just a short walk from the subway nexus of Yonge and Bloor, this vaunted venue was the gathering place for youth from all over the GTA looking to express their emerging sub-cultural identity and see their heroes up close. With a capacity for 1600 bodies, the Concert Hall existed in that magical sweet spot between club and stadium. It was the perfect place to see acts on the rise, before they reached the alienating arena circuit where the cost of a ticket would set you back a month, where security kept you plunked in your seat, and where you couldn’t see the sweat on the performers’ brows.

Going to shows at the Concert Hall was a thrilling free-for-all – made all the more electric by its layout – a general admission venue with an open, standing-room-only floor and seating only on its wraparound balcony. If you got there early enough and waited the three or four hours until the doors magically opened, you could push right up to the front. Which was prime real estate: you could see the band up close, hold onto a stage monitor, feel the volume pulsing through you – and remain relatively shielded from the mosh pit erupting behind you. The Concert Hall scene exemplified the energy, arrogance, anxiety, style, swagger, naivete and nerves of youth in an era when “alternative” still felt like something of a secret.

Every Toronto-raised music lover of a certain age has their own list of formative, mind-blowing shows they saw at the Concert Hall. Given my own indie noise-rock predilections, mine would have to include: Pixies on the Bossanova tour in 1990, ridiculously tight and intense; the Replacements, fighting their way through their last local show in 1991, the opening act a baby-faced Buffalo band called the Goo Goo Dolls; Dinosaur Jr. a few months later, where guitarist J Mascis melted my face when first stepping on his distortion pedal; Beastie Boys, right after the release of Check Your Head in ’92, with fIREHOSE opening. After that show, I got to meet my punk bass hero Mike Watt, waiting in line for a drink.

Others have their own lists: one metal-loving high school friend raved for days about the epic Voivod / Faith No More / Soundgarden triple bill in 1990. Yep, Soundgarden opened. I heard similar reviews about the Red Hot Chili Peppers / Smashing Pumpkins / Pearl Jam gig in the fall of ‘91, amidst grunge-mania. (Witness this Twitter thread for hundreds of memories from T.O. showgoers.) Shows at the Concert Hall were always crazy: my high school girlfriend said the security didn’t know what to do when hundreds of teenage girls rushed the stage for Canadian folk-pop heartthrobs The Grapes of Wrath.

Sometimes, the shows were outright dangerous. At one legendary gig by fluid-splattering costumed metal icons Gwar, an idiotic stage-diver jumped off the balcony. The balcony: a 15-foot drop to the floor, where he landed on a fellow concert-goer. His victim was rushed to hospital with a broken back. That young man – the victim, not the jumper – turned out to be a teenaged Justin Small, who grew up to be guitarist with Toronto post-rock collective Do Make Say Think, who themselves ended up playing the Concert Hall in 1997.

As Small recalls, “I walked away from it, but the doctor who’d looked after me said that if I was five inches smaller it would have killed me. Also of note, was being yelled at by the intake nurse for being covered in fake blood. She COULD NOT understand what kind of concert this was supposed to be!” On another, happier occasion, Fishbone singer Angelo Moore also dove into the crowd from the balcony – as recalled by CBC Radio personality Matt Galloway.

But the Concert Hall, and the Masonic Temple that housed it, lived many different lives, beyond the alt-rock world of my own particular youth. To people in the hip-hop community, the Concert Hall holds significance as the birthplace of rap music in Canada, thanks to the legendary parties thrown by DJ/promoter Ron Nelson in the mid-‘80s. Nelson brought New York acts like Public Enemy, Salt-N-Pepa, Eric B. & Rakim and Big Daddy Kane to town, where they often battled the best Toronto had to offer. Many of the first wave of Canadian rappers got their start there, including Maestro Fresh Wes, Michie Mee, and Dream Warriors.

To the New Wave generation of the early ‘80s, the Concert Hall was home to shows promoted by The Garys, the creative duo of Gary Cormier and Gary Topp, who presented countless top-notch overseas imports on that stage: New Order, Gang of Four, The Specials, and The English Beat, as well as U.S. acts like Iggy Pop, Ramones, R.E.M. and Slayer. In fact, The Garys helped revive the Masonic Temple and re-brand it as the Concert Hall in 1980, after a period of relative inactivity.

A decade earlier, it was known as the Rock Pile — Toronto’s major rock music hall during the psychedelic ‘60s. Most famously, Led Zeppelin played there, as did The Who, the Grateful Dead, Frank Zappa, and Deep Purple. Prior to that, it was known as Club 888, booking R&B shows including a 1966 Wilson Pickett gig featuring a young Jimi Hendrix on guitar. The Rock Pile was so notorious for the destructive shenanigans of its audiences that its owners, a family of Masons, were wary of booking rock bands throughout most of the ‘70s.

I was pretty oblivious to the building’s Freemason history when I went to shows there as a teen. Built back in 1917, the Masons had originally intended that the revenue from renting the lofty dancehall would fund their lodge meetings, which took place in the closed-off upper floors. It wasn’t until after the building was sold to CTV in 1999 that many civilians saw these back rooms in the flesh. I first heard stories about their ornate weirdness when the Polaris Music Prize Gala was held there from 2009 to 2012.

Sadly, the Concert Hall effectively ceased to be after CTV took over. It became home to live tapings for broadcast, and later, a new base for MTV Canada. Its latest owner, Info-Tech Research Group, attempted to resurrect the building as the Concert Hall in 2017. Though it hosted a few shows for the Toronto Jazz Festival that year, by all accounts the exorbitant room rental fee made presenting gigs there an untenable prospect. Under the brand, 888 Yonge, the company runs the space as a 700-capacity “event venue” – a term that usually implies two things: weddings and corporate.

In the 2000s, the crucial “medium-sized hall” role that the Concert Hall played was filled by Kool Haus, on Queen’s Quay East, and, more recently, by the Danforth, likely its most beloved successor. The Danforth is a fine, grand room, but its atmosphere is rather polite in comparison. Toronto of previous generations was lucky enough to benefit from the Concert Hall being a viable venue back when it made economic sense for independent promoters like The Garys and Ron Nelson to take risks on breaking new and unproven acts there.

Yet the Concert Hall’s large size – in comparison with the coffeehouses of Yorkville and the clubs of Queen West – meant it was often an inaccessible stage for most local bands, beyond the rare opening slot. Only an elite few could reach hometown headliner status to fill the room: Kensington Market and Lighthouse in the Rock Pile days; Teenage Head and the Spoons in the New Wave years; the Tragically Hip and Sloan in the ‘90s.

Now that the pandemic has shut down all live music activity and promoters and venues are tentatively considering how and when they might reopen, perhaps the Masonic Temple’s owners might consider donating some of their tech-biz resources to creating a space for local musicians to perform, at little to no cost. The beautifully restored hall is, after all, large enough for a few hundred people to safely congregate and maintain physical distancing. Perhaps the Concert Hall has a role left to play in the next chapter of Toronto music history.

Jonny Dovercourt is a writer, musician, and concert presenter based in Toronto. He is a co-founder and the artistic director of the Wavelength Music Series. He is the author of Any Night of the Week. A DIY History of Toronto Music 1957 to 2001 (Coach House Books).