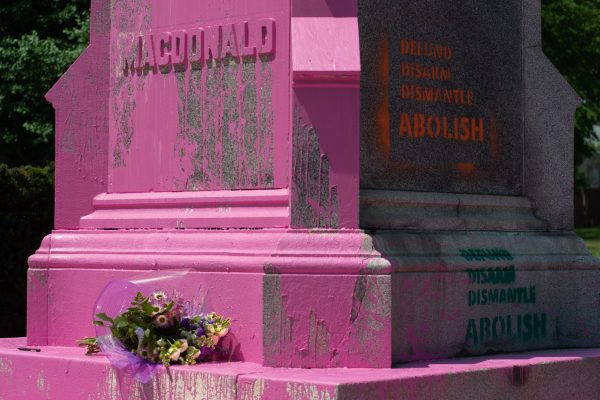 In this moment of social and political upheaval, as protesters demand racial justice in response to police brutality and systemic racism, people are beginning to rethink how they want to navigate public space and who they want to see represented. Monuments are toppled, protesters demonstrate, and a wave of change is felt through the streets.

Public art interventions and protests are linked. Both are a means of re-imagining possible futures and alternative social structures. They propose different ways of being in the world. In Toronto, these interventions have taken a variety of forms, from the Paint the City Black project in Graffiti Alley, to the Black Lives Matter installation at Stackt Market, to the ‘Defund the Police’ mural painted in massive pink letters outside Toronto Police Service headquarters on College Street.

On July 18th, Black Lives Matter Toronto organized another art-based protest, splattering pink paint (in connection with the pink ‘Defund the Police’ mural) on monuments of Sir John A. Macdonald, Egerton Ryerson, and King Edward VII. In an interview with The Globe and Mail, Rodney Diverlus, co-founder of BLM Toronto, characterized the demonstration as a response to police violence and a rejection of monuments that symbolize “white-supremacy and anti-Black racism.” Three protesters were arrested and charged with mischief.

Syrus Marcus Ware, an activist, core member of BLM Toronto, artist, and scholar, has been at the forefront of many of these demonstrations. As the co-curator of the Church Street Mural Project, and the artist behind the Activist Portraits Series, Ware has spent decades imagining alternative realities in Toronto through art-based practices.

I recently spoke with Ware about his activism, art, and hopes for a better future.

SPACING: Right now, we are seeing certain actions unfold in public space that reflect upon the nature of public art, monuments, and the connections between activism and art. You’ve spoken about this before, but could you elaborate upon what you see as the intersection between art and activism, and how those two things overlap in your practice?

Syrus Marcus Ware (SMW): I’ve been both an activist and an artist for 25 years, so for me the two are intimately connected. I’ve been very inspired by that Toni Cade Bambara quote where she says that the role of an artist from an oppressed people is to “make the revolution irresistible,” so I’ve been really interested in using my art practice in order to inspire activism and future activisms. At the same time, just as my art is heavily activist-based, my activism is heavily art-based—it uses creative mediums to tell a story to a larger audience in a way that wouldn’t be possible from just publishing an article.

Spacing: That’s a fascinating quote about making the revolution irresistible. What do you take that to mean? How does that play out in your practice?

SMW: I think this is a revolutionary moment. And I think the point of my art— and what I take from the Toni Cade Bambara quote—is to say, ‘hey, by the way, another world is possible. One where we all get to be free. One where black lives matter. One where there is Indigenous resurgence. One where there is an accessible future for all deaf, mad and disabled people.’ We actually can build a world that is so, so beautiful, and we can get a glimpse into what those potential futures might look like through creative practices.

Spacing: Some of the works going up right now appear to be doing that. The defund the police mural, of which you were a part, seems to be a way of getting people to re-imagine what is possible. Can you talk a bit about that piece?

SMW: Yeah, for that project, we got together 25 contemporary Canadian visual artists and 80 volunteers. We painted this message as large as we could, and as brightly as we could, in a queer colour, because we are a queer and trans-led group. We did this to emphasize that there really is no pride in policing, to show that we do need a different system. This mural outside of police headquarters was one way of calling for that change, where activists and artists came together and said, ‘let’s add our voices to this global chorus of people saying it’s time to defund the police.’

Spacing: What was the process of organizing that project?

SMW: We measured it and figured out how many artists it would take to paint a mural of that size, measuring 7,500 sq.-ft. There were so many things to think about. We had to think about safety, COVID, distancing, PPE for handling the gloves, rollers and paint. We had to think about what paint would be safe to use on streetcar tracks. The fact that it was an unsanctioned mural made the process feel particularly heavy.

Spacing: It sounds like a really interesting community experience as well.

SMW: Oh gosh, it was beautiful. There were drummers drumming music. There were chanters chanting ‘defund, disarm, dismantle, abolish,’ there were dancers dancing around the space. We had some of Canada’s best artists painting along the streets. You couldn’t see where the mural began and where it ended because there were so many people painting this bright, queer, beautiful colour. It was really electric. It was magical.

Spacing: Do you feel that new forms of public art are starting to become possible? Are there certain kinds of public artworks that you would like to see more of?

SMW: What’s so interesting is that for millennia people have been creating public works of art that existed in their communities for public consumption. Now there is a bureaucratic system in terms of how public works are created. What is exciting about this moment is that people are taking to the streets and just doing it, like when people wrote ‘Black Lives Matter’ up Augusta in Kensington Market.

I think that’s an exciting direction for public art to take, for people to feel a sense of authority and ownership over their shared space and what it should look like. We have a city full of blank walls, of boring, drab streets, of spaces where we could have more public conversations. We have a city full of brilliant artists who want to contribute to those conversations, and a city full of activists who have messages to share, so this is a really exciting moment during which people are taking to the streets and just making art.

Spacing: Are there certain measures you would like to see implemented by the City in regards to public art and the different ways it might be approached?

SMW: I’m so excited to have autonomous space for artists to work. What’s so great about something like Graffiti Alley is that everyone can just paint and do whatever they want in this area. It allows artists to work without the fear of criminalization, because certain forms of public art are criminalized, particularly those that are associated with Black communities, i.e. graffiti art. One of the benefits of a place like Graffiti Alley is that Black artists can work without fear of harassment by the police.

In terms of the City, what I would love to see is more possibility, or an ease in the approval of public artworks. In the absence of that, these activists are just going to keep making art. Wouldn’t it be wonderful if there could be an ease in the process of erecting public artworks, especially those by marginalized artists? The current process of putting in bids and having a jury doesn’t always work for artists who are traditionally marginalized from the mainstream, so how do we make a public art process that is more accessible and more viable for marginalized artists? Having something put in place that’d make that possible would be beautiful to see. But, at this present moment, I love this. I love to see murals, banners, and works of all sorts going up across Turtle Island in response to this issue.

In public art right now, we are hearing from voices that we would never have heard from otherwise. These are the voices of Black trans women, the voices of disabled youth, all helping to paint, for example, this giant mural on College Street. This is a public art that is radically different from what we have seen before, and I really hope the City comes out and supports it.

This interview has been edited and shortened for publication