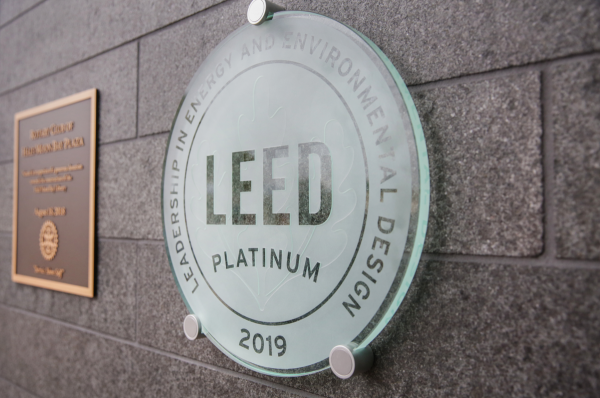 Few would argue that the City of Toronto’s goal of reducing building-related carbon emissions to zero by around 2030 is a worthy, though challenging, goal. Built form, after all, accounts for about 40% of all greenhouse gases. But how do we know when a building has actually stopped emitting carbon? And what does net zero really mean?

In a jurisdiction with relatively clean electricity, one answer seems straightforward enough: heat only with electrons; don’t build in a field in the middle of nowhere; use construction materials that sequester instead of consume carbon.

But we don’t live in a simple world, so the political economy around green building policies is a bewildering maze of acronyms, competing certification protocols, and sly gaming strategies, all set against the technically daunting backdrop of building science and building codes. LEED, PHI, PHIUS, TEDI, TEUI, GHGI, TGS. The list goes on, making it nearly impossible for a lay person to determine whether the city is actually moving toward its stated goal.

For years, LEED has been the best known green building standard, implemented by developers and architects according to a complex framework set out by the Canadian Green Building Council. Problem is, many builders now understand how to manipulate the points-based LEED certification system to create projects that are marketed to investors or tenants as environmentally friendly, but aren’t necessarily low-emission structures.

A 2013 study on New York City’s record with this approach concluded “that LEED building certification is not moving NYC toward its goal of climate neutrality.” A 2019 Finnish literature review — entitled, “Are LEED-certified buildings energy efficiency in practice?” — came to a similar conclusion, noting that lower levels of LEED certification produced “questionable” gains.

Passive House, a 30-year-old German standard, has delivered far more consistent results using a combination of features that include extremely tight building envelopes, thick insulation, triple-pane windows, passive solar orientation and high-efficiency ventilation and heat recovery systems. This design methodology, which can slash energy consumption by as much as 90%, has become commonplace in northern Europe, and is gaining traction in the U.S. and British Columbia.

The wrinkle is that it’s still difficult to obtain some types of Passive House certified components in North America, and the pool of contractors trained in this kind of construction is small. Some critics also argue that some Passive House-certified buildings contain a great deal of embodied carbon because of the large quantities of insultation required in such structures, although there’s growing interest in work-arounds that achieve similar energy reductions.

Yet both LEED and Passive House are voluntary – it’s up to the developer to figure out whether there’s a return on the additional upfront cost, either in terms of a building’s marketability or its operational expenses.

A slightly more systematic way of pushing down building-related carbon has come in the form of Toronto’s deep lake water district cooling infrastructure, which has allowed many of the office towers in the financial core to buy heating and cooling from Enwave, thereby displacing natural gas consumption.

The network is growing west, with the construction of The Well, at Spadina and Front, a massive RioCan/Allied/Tridel joint venture that sits on top of a 7.6 million litre lake water cistern that will supply cooling for buildings proposed for King West. For office buildings, the math works, and so while hook-ups are voluntary, they make financial sense. Condo towers, however, have proven more difficult to recruit, because the ownership is fractured.

The City’s attempt to impose some regulatory order on all this activity is the Toronto Green Standard, which establishes minimum performance standards for new construction that exceed the pathetically modest ones in the Ontario Building Code. Since first approving the TGS in 2009, council has tightened the policy several times, making it gradually more demanding by adding higher voluntary “tiers” paired with financial incentives, such as development charge debates.

As of 2018, TGS Version 3 came into effect, with a four-tier system of performance standards for a range of metrics – air quality, energy efficiency, carbon emissions, solid waste, etc. Only tier 1 is mandatory for every project, for now. But TGS V3 borrows heavily from B.C.’s “energy step code,” which is, in effect, an escalator: over the next several years, the minimum standards will increase in predictable increments, until all new buildings will be net zero by 2032.

Because the TGS V3 also operates like an escalator, projects that commence later in this decade, including privately developed ones, will have to satisfy the more demanding minimums that currently only apply to city-owned properties. After 2030, the net or near zero rules will be required of every new project.

Some aspects of the TGS approach are straightforward attempts to show leadership and prime the market pump for more energy and carbon friendly products, like ultra high-performance windows. For example, buildings developed by the City or its agencies have to meet more stringent standards that are, as of now, still voluntary for private builders. Other features, however, are just plain complicated, as a scan of the side-by-side comparison between the TGS v3 and LEED Version 4.0 for private mid and high-rise buildings demonstrates.

There are also ambiguities in the policy. For example, on Toronto Community Housing revitalization projects (e.g., Regent Park, Lawrence Heights), new rental towers that will be run by TCH must comply with higher standards, but the market buildings, which sit on public land that the agency is selling to private developers, may not. The same is true for the new Housing Now projects going up on city-owned land.

In other words, two buildings – one market, the other rent-geared-to-income – may go up next to one another in the next phases of, say, the Regent Park revitalization, but the subsidized one will have better energy efficiency features (and therefore lower operating costs) than its privately owned neighbour.

Waterfront Toronto, meanwhile, is adopting a slightly different approach, which it recently published, for precincts like Villiers Island and Quayside. In the Sidewalk Labs era, the agency wanted to promote Passive House-grade development, but has since revised its thinking somewhat. Now, developers will be expected to meet the toughest of the TGS tiers (4) after 2025, which are similar to Passive House in terms of performance but won’t require certification as such. WT’s Green Building standards lay out requirements for areas such as building resilience, EV infrastructure, and waste management.

Aaron Barter, WT’s director of innovation and sustainability, says WT will also be asking developers to disclose the embodied carbon in their projects, which means considering alternatives to high emitting materials like steel. “This is the direction the market is headed.”

Besides all the technical minutiae, there is a hugely impactful detail in WT’s carbon reduction plan for these new neighbourhoods: no natural gas hook-ups. The entire area, Barter says, will be powered by electricity.

While the province does rely on natural-gas fired generators — including the Portland Energy Centre, sitting only a few hundred metres from Villiers — for load balancing, Ontario’s electricity system isn’t a heavy carbon emitter, so WT’s development plan is not only a big win, but also easy to understand.

Yet WT’s gas-free development plan should serve as a bracing reminder that, despite all the various green building strategies, most of Toronto’s low-rise neighbourhoods consist of brick homes and apartments hooked up to a far-flung natural gas distribution network that is worth billions in sunk costs, and isn’t going anywhere anytime soon.

It’s certainly true that many homeowners, residential contractors and even apartment managers are adding insulation, replacing windows, and installing EV charging in garages. But natural gas, as a 2018 City report notes, “continues to be the largest source of emissions community-wide, accounting for approximately 50 per cent of Toronto’s total GHG emissions.”

Natural gas is also the carbon source that remains most stubbornly beyond the reach of the sorts of policy sticks and carrots deployed in recent years to improve energy efficiency in buildings. Even the recommendations of home energy audits tend not to get at our gas dependency beyond recommending higher performing furnaces.

The related point is the harsh financial reckoning that will make its presence felt on the gas bills of hundreds of thousands of homeowners (and, indirectly, the rents of tenants) as greenhouse gas levies more than quadruple the price of carbon, from $40 today, to $170 in 2030.

Maybe that’s when Torontonians will finally try to decipher all the dense techno-speak in our green building codes and figure out how those acronyms can hedge their exposure to the carbon that’s hardwired into the urban environment.