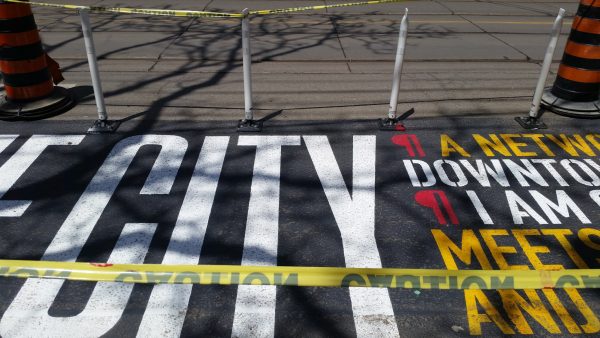 Ronna Bloom is former Poet in Residence at Mount Sinai Hospital, now Sinai Health System. Long before face coverings became mandatory on the TTC or line-ups formed outside of pharmacies, Bloom documented in her poetry the exhaustion of expressing emotions behind a medical mask and the anxiety of securing a flu shot. She is currently Poet in Community at the University of Toronto. In this interview for Poetry Month, she spoke about a hospital’s role in the city and what poetry can bring to public space.

Based on your experiences at Sinai Health, how do you see the hospital connecting to the rest of the city?

I see the hospital as an extension of the city. It is the place that underlines the fact that everyone is vulnerable. When I used to go into Sinai Health to bring poetry in, I’d say to myself  “Wake up, you’re going into a hospital. There are sick people here. Pay attention.”

By sick people, I meant also vulnerable people. I never knew who that might mean, because many of those I met were not patients but staff or family members or people walking through. My mantra is: everyone who is alive could use a poem. Whether they want one is a different matter. In that sense, the work of poetry can be done anywhere there are people.

It takes everything to look in the face of all our vulnerable skin.

(From the poem “Health” in Ronna Bloom’s The More, her book based on work at Sinai. Cited with permission)

You’ve posted photos of scrips from your time as poet in residence at Sinai Health. What does it mean to prescribe poetry?

To prescribe poetry is to listen a person and respond with a poem. When I prescribe poems, I sit at a table in a public place and when a person sits down, I ask, “What do you need a poem for?” Then I listen both to what they say, and what they express without words.

I ask questions until I get a sense of it. Maybe it takes 10 minutes and I look through the collection of poems I have printed on prescription paper, and choose one that resonates. Sometimes more than one poem fits — I joke that it’s ok to double dose. I have poems by Lucille Clifton, Hafiz, Cavafy, Langston Hughes, Adrienne Rich …

I read the poem to them and watch their response. It’s not something a person needs to think about: if it works it’s immediate — the way we say “the medicine works.” The aim is to find a poem that speaks to what has not yet been articulated.

Your poem “The City” was painted on the pavement as part of the King Street Pilot in 2018. How did that installation emerge and what can poetry bring to a busy street?

I have been a fan of PLANT Architects for a long time and we worked together on a project in Quebec a few years ago called SOS Paysages Autoroutiers. They approached me when they were making a bid to create a parklet for the King Street Pilot project and asked if I could write a poem. I realized that my poem “The City” spoke to the request.

They painted “The City” in bright colours 70 feet long on King Street — how rare for a poet to get to lie down on her words! Some of the words and phrases were upside down so they could be read from the streetcar or the sidewalk.

It’s a way to get people to stop and wonder – what the heck is this? Some keep going and some stop and read. It reminds people, I think, that they have a body in the space, and are more than just where they’re heading. I think there’s a kind of delight for some people when poems turn up in unexpected places like roads and hospitals. What is civic about the civic? It is both what is essential and what is possible. People’s involvement in the city is or starts with an act of imagination.

Are there places in Toronto that bring you solace?

I like places that are a mixture of industrial, train tracks, and scrubby land. The area behind the UP station near Dundas in the Junction, or down by the water near Cherry Street. I love construction sites and get way too close for their comfort. I’ve loved cement trucks all my life for the fact that their drum must stay in motion.

I suppose these are all transitional places or experiences.  Places full of the energy of people who lived here long before and those to come and people on their way somewhere. Nature, junk, beauty, houses, apartments, boats, trains, wires … the working parts. It crackles and hums. I also feel good walking for even five minutes in the ravine among the trees.

What are you looking forward to this Poetry Month?

How Poems Move in the Hospital — with Adam Sol, Dominik Parisien, Moira MacDougall, curated by Shane Neilson. These poets have such richness to offer now, I can’t wait.