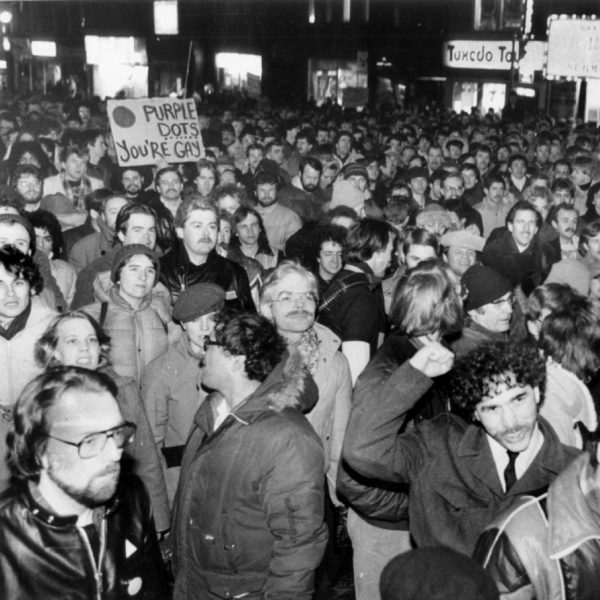 This is the third of a four-part series on urban oral history.

My first conversation with Bart Birmingham (he/him) was a little awkward. After six months of social distancing, chatting with a complete stranger felt strange. Over Zoom, it felt almost impossible. We stared blankly at one another for a moment before he joked: “You’re from England, right? You must have grown up on some pretty bland, beige food.” I laughed, and suddenly we were both at ease. His sense of humour complemented mine perfectly. At that moment, I knew we were going to get along.

Bart and I met weekly throughout the Fall of 2020. Before each call, I would pour myself a large mug of hot coffee, grab a notebook and pencil, and prepare to be transported back in time. Bart’s eyes would light up as he told me tales of his twenties, over 50 years ago in the early 1970s. My favourite stories were of the days he would sneak out of his home to meet other queer people in hidden enclaves of Toronto. These nights were both exhilarating and intimidating. Entering a gay bar in the 1970s meant he could be arrested, attacked or “outed” to others in his community. There was something magical, however, about being in queer space(s), surrounded by his “chosen family”.

Yet Bart’s experience as a queer person navigating Toronto is vastly different from my own. Our dialogue prompted me to consider: What was queer culture like in Toronto in the 1970s and 1980s? In an attempt to answer this question, I created an inter-generational map of safe queer space(s) in Toronto over the decades. 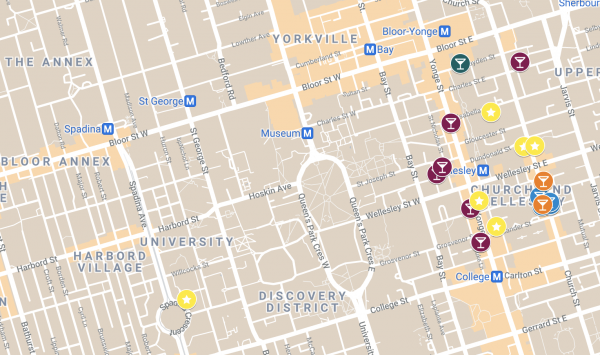 See the map on Google

The first layer  examines popular gay bars in Toronto during those decades. These are indicated using the maroon bar pin, and are clustered together on Yonge Street and St. Joseph Street. Today, I attend queer bars on the streets of Church and Wellesley, in The Village. I had no idea how important these spaces would become to me. When I first came out in 2016, I was lonely. My friends and family were incredibly supportive, but at the time, nobody in my life openly identified as queer. I desperately craved the wisdom of other queer folx who knew how I was feeling, and could educate me on the community from which I felt so removed.

It was not until my first year at the University of Toronto in 2017 that I visited The Village. My girlfriend and I walked the streets, hand in hand, smiling at other queer couples walking past. I had seen queer couples in other areas of Toronto, but there was an unspoken energy on these streets. My girlfriend and I were expected and desired. We began to frequent the bars along Church Street, and I began to learn more about the complex history(ies) of the space.

Bart argues that, throughout the 1970s, the most memorable gay nightlife was not The Village, but rather along Yonge . The St. Charles Tavern, STAGES, and Club David’s were a few of Bart’s favourite spots, all of which could be found between Isabella and College. Bart’s journeys between gay spaces had to be expertly mapped, ensuring he could get from one space to another in as little time as possible. He was able to visit only one or two gay bars per evening if he wanted to ensure his safety while travelling. Though he owned a car, he often felt obligated to park it a few blocks away from popular queer enclaves. His shiny red convertible prompted others to read [him] as “gay, as sissy or flashy,” so he left it north of Bloor, near Cumberland. “It was easier to walk and blend into the crowd,” he says. “I didn’t need the extra attention.”

The second layer of the map pins (known) popular lesbian bars in Toronto in the 1970s/80s. These spaces were not as common or `accepted’ as male-dominated gay space(s). Bart says he “never went to a lesbian bar, mostly because they didn’t let men inside. I think it was to conceal closeted lesbians from their husband. Some people would use code words instead.”  Language became an important aspect of queer nightlife, and culture more generally, helping queers locate one another. The term “meet under the clock” was code used between gay men as a signal that they would be attending the St. Charles Tavern that evening. Located on 488 Yonge Street, St. Charles was an iconic meeting spot for many closeted queer folx in the city. The gay bar was built directly below a clock tower in Toronto Fire Hall No. 3, circa 1951. Under the cover of night, folx would gather here to be together. Standing in known “gay” areas of the city, however, often prompted harassment or unwanted questioning. Teachers, lawyers, doctors and drag queens were thus encouraged to enter/ exit bars through the back door to avoid detection. Once inside, public service workers would remain in close proximity to an emergency exit. Those found in queer space(s) would be fired or harassed.

Despite having been targeted and abused in Toronto as a gay man, Bart cites the city as a place of acceptance and safety for many queer people. “There were a lot of gays that were coming to Toronto,” he says. “You’d see a lot of young guys get off the bus at night, and sometimes they were in distress. These were runaways from the country.” Many older queer men would congregate at the bus terminal, waiting for other queer men to arrive. They would then travel to resource centres and bars together. On the map, resource hubs are located throughout the city and serve different neighbourhoods. The geographical dispersion helped to ensure that queer folx from across the GTA had access to community and “safe” space(s).

Bart’s map of queer space is vastly different from the space(s) I navigate today. Many of the bars detailed by Bart are no longer in operation: the clock tower of the St. Charles Tavern, declared a heritage property in 1974, is now part of a condo development. Chez Moi, the only lesbian bar mapped by Bart, closed down in 1989. Those still thriving around Church/ Wellesley provide a clear representation of where queer enclaves began to form, and where they continue to flourish. These spaces, he says, are “of undeniable importance and sentiment” to queer histories and place-making legacies.

Queer identified folx nurtured an incredible community of care in Toronto throughout the 1970s and 1980s, in which they created, mothered and preserved their own space(s) and resources. Bart reminds us that this was not always easy, but that being in queer spaces with queer people felt like “brothers and sisters coming together after years apart. It was this unspoken closeness. We were family.” The oral history of Bart Birmingham works to preserve this memory and make space for queer folx in Canadian archives.

Hannah Curtis (she/her) has an undergraduate degree in Equity Studies and Urban Studies from the University of Toronto and works as a Community Development Coordinator at the Neighbourhood Group in Toronto. Follow her on twitter at @_hann99_ .