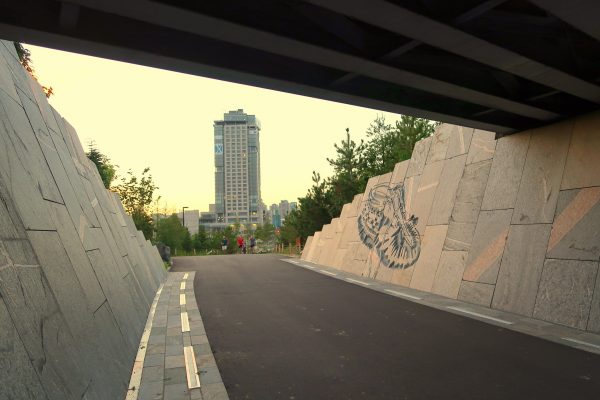 Earlier this month, I spoke to Carolyn King, historian, former Chief of the Mississaugas of the Credit, and founder of the Moccasin Identifier Project. While she was chief from 1997 to 1999, she helped begin their land claim process for the area covered in the 1805 Toronto Purchase (Treaty 13). It wasn’t until 2010 that the Canadian government settled the land claim and provided $145 million in compensation to the Mississaugas of the Credit.

In December, 2020, King was named to be a member of the Order of Canada for her expertise in community development, advocacy of Indigenous-led initiatives, and efforts to improve Canadians’ understanding of First Nations. More recently, Carolyn has been keeping herself busy with the Moccasin Identifier Project and its programming in classes.

The Moccasin Identifier Project was born when the Mississaugas of the Credit were working on an app that marked areas of historical significance on a digital map. When presenting this app at a historical conference, an audience member asked Carolyn and her team what they would see if they went to that spot. Carolyn responded, “Nothing.”

It was then she realized she could take this project beyond the digital realm and create physical markers to remind anyone passing by that this is Indigenous land, and there is a long history of Indigenous people here.

Rolling with this idea, Carolyn started to think of what symbol could be used to mark these areas of historical significance. She wanted something instantly recognizable and relevant to the project. Some people suggested items like an eagle feather or dodem (clan) symbols, but she felt those were too sacred. “If people walk over them and don’t know what they are, it’s just going to make us mad again,” she says, and would defeat the purpose of the project.

She had her work cut out for her. Carolyn wrote on her white board, “What will identify us and connect us to the ground?” Three days later, it came to her — moccasins! “It shouldn’t have taken me three days!” she said. It was then that the Moccasin Identifier Project was created.

In the beginning, the project was only going to mark Anishinaabe history in Ontario and would use two separate moccasin designs. However, over time, the project expanded to include “the people on the land, some are in the ground, some are moved away, and some are still here.” So the Anishinaabe, Cree, Haudenosaunee, and Huron-Wendat, who were the four main linguistic groups in the area, were added to the project.

Once three more nations joined, three more moccasins were needed. The project partnered with the Bata Shoe Museum and gained access to the museum’s collections in order to research and create designs that would be stencilled across Ontario.

“There’s few things in this world that stop me from talking or take my breath away,” says Carolyn. “When I walked into the collections, the first time I went there, you enter that room, [and] I just stopped, [it] literally took my breath away. I said, ‘it’s leather, it’s smoked, and it’s somebody’s footwear.’ It has a smell. I can almost smell it now. It’s just an amazing collection of stuff.”

When explaining her experience with the museum, Carolyn has nothing but good things to say about it and the late founder, Sonja Bata. It’s because of Bata that her team has such a large collection of Indigenous North American and Arctic Circle footwear. Sonja Bata was a tireless collector who always made sure to pay makers fairly.

It’s here that artist, historian, educator and activist Philip Cote enters the story. He has a history of working with the Mississaugas of the Credit, and was a natural pick for this project. He was also given access to the Bata Shoe Museum collection and did lots of research and studying to identify the details that make each moccasin from these four linguistic groups so different. The end result was the four stencils that are used for the project to this day. 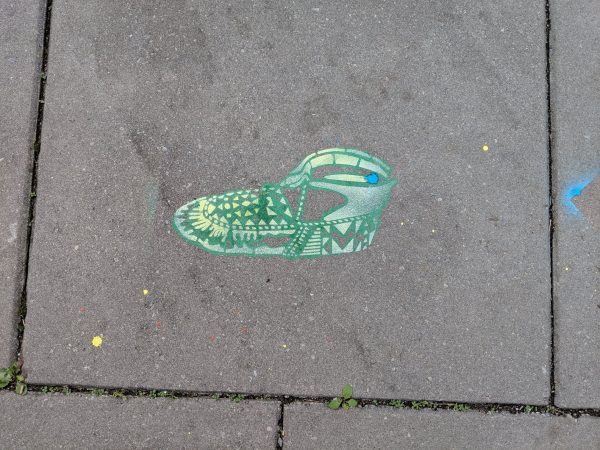 The project has created permanent engraved moccasins at Ontario Place, the Credit River Valley and many other areas. Carolyn says these landmarks are “helping put our identity back in place with things that represent us.” Along with the landmarking that was the original aim, educational programming has also become a part of the project.

Though mainly focused on school age children, the activities can be done with any age group. Participants can paint their own stencil onto the ground and learn more about Indigenous history in their area. Kits are available for teachers to order online so they can bring the project to their classroom. Prior to the COVID-19 pandemic, Carolyn and her team hit the road often to set up a booth to do this activity across Ontario.

She finds that participants of all ages have the same breath-taking moment she had when they lift up the stencil to see the painted moccasin design on the ground. I asked her why she wanted the project to extend to youth. “We’re looking to change the world,” she replied, “and we want to educate [everyone] about the original people of the land [so] we’re starting over with the children.”

Though things have changed due to the COVID-19 pandemic, the Moccasin Project carries on digitally. Recently, Carolyn’s team has presented to the City of Toronto and at the Native American and Indigenous Studies Association (NAISA) Conference. They also recently received funding from the Greenbelt Foundation so they can continue making a difference in the landscape and with youth.

When asked of future goals for the project, Carolyn says, “I envisioned that we’re going to change the world eh? I have a vision that Ontario is going to be covered with Moccasin Identifiers in the next decade, and they will forever know whose land they’re on.” Further down the line she also sees potential in extending the project countrywide and even south, into the United States. Another goal of hers is to make a poster of Canada and mark it with all the moccasins of each linguistic group.

Carolyn also has a vision that youth will deliver the presentations and programming of the project. She has already tested this approach once with two youth who rose to the occasion when Carolyn had to leave a conference to retrieve her missing wallet. Youth, Carolyn says, “are our next leaders.” She has full trust in their abilities.

I asked her what she planned to do for Indigenous History Month, given that her usual plan to set up a booth at Fort York’s Indigenous Arts Festival has been disrupted by the pandemic. Instead, this year, she will be participating in smaller events in New Credit. Through all the work she does, Carolyn’s “dream [is] that we [Indigenous people] are going to be visible in this province.”

Mnawaate Gordon-Corbiere is Ojibwe and Cree from M’Chigeeng First Nation. She is a young historian with a focus on Indigenous history. Follow her on Twitter: @mnawaate