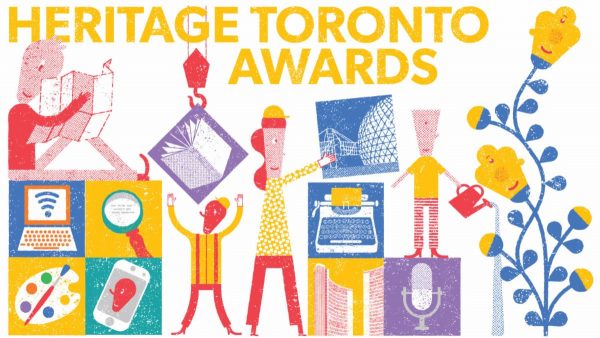 Seven winners were named from 47 nominees in four categories: Community Heritage, Book, Public History, and Built Heritage. Each category is independently judged by a jury of experts. In 2021, the inaugural Craftsmanship Award was presented in the Built Heritage category, and the first People’s Choice Award was selected by attendees during the ceremony from among Public History nominees.

All nominated work highlighted the key role of heritage in city building, and demonstrated the commitment of organizations and individuals in the field to serve Torontonians in transformative ways. The winners with their inspirational achievements reveal exciting possibilities for the heritage sector in a post-pandemic future.

The Community Heritage Award was presented to:
The Japanese Canadian Cultural Centre for its decades-long work to promote Japanese culture and Japanese Canadian heritage. The JCCC offers a wide range of programs, from film festivals to martial arts presentations, to 5,200 members and over 210,000 visitors annually.

The Book Award was presented to:
Accidental Wilderness: The Origins and Ecology of Toronto’s Tommy Thompson Park, a collection of essays on the development of a former landfill site into a city park, and its importance to public recreation and the natural environment.

The Public History Award was presented to:
The OJA Presents: A Trip to the Market, an educational program benefitting over 3,000 students, which effectively blurs past and present through an immersive experience on the Jewish presence in Toronto and its commonalities to current immigrant stories.

The People’s Choice Award was presented to:
Old Toronto Series, comprising 40 short films about the local history of the city that seek to make Toronto’s history approachable, engaging followers of all walks of life, ages and orientations. The award includes a $1,000 honorarium.

The Craftsmanship Award: recognizing the use of construction techniques and materials that are compatible to the building’s original architectural qualities.

WINNER:
Paradise Theatre, 1006 Bloor Street West, for reimagining an early 20th-century cinema, inspired by its Art Deco design by Benjamin Brown, one of the earliest Jewish architects in Toronto. The 1937 heritage-designated landmark has been transformed into a thriving creative hub and community amenity.

The Adaptive Reuse Award: recognizing projects that meet current needs while maintaining the integrity of the original design vision.

WINNER:
Downsview Campus Centre for Aerospace and Aviation, 65 Carl Hall Road,for transforming the de Havilland plant, built from 1929 to 1944 and once the centre of aviation manufacturing and design in Canada. The site now houses an innovative learning institution for Centennial College, which continues to contribute to the legacy of Canadian aviation.

WINNER:
Massey Tower for revitalizing the former branch of the Canadian Bank of Commerce at 197 Yonge Street as part of a new mixed-use development. The project prioritized the rehabilitation of the 1905 landmark, maintaining its visibility on Yonge Street by setting the connected tower behind the heritage building.

During these exceptional times, the work spanned the past two years due to the 2020 cancellation of Canada’s longest-running heritage awards.