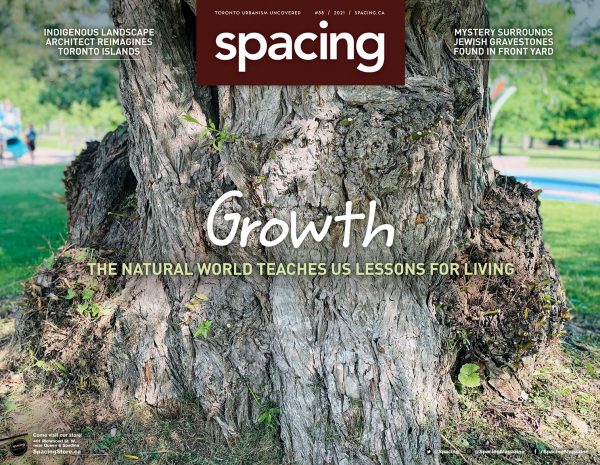 Sometimes we get a series of pitches that don’t fit well into a particular issue, but relate to each other as they accumulate in our pitch pile over time. That’s how it was with the various proposals for articles about growing greenery in the city that kept landing in our inbox. It was obviously an ongoing interest of our writers, but with the pandemic surge it was hard to find space to fit them all together.

What finally precipitated an issue about growing that could germinate these pitches was City Council passing a bylaw to (at least in theory) allow “natural” front yards as of right. It felt like a moment where Toronto was finally loosening up, accepting the presence of a little less-controlled wildness within the built environment, although it turned out that, as always seems to be the case, it only went partway.

The natural world, as Sarah B. Hood notes in her introduction (“The natural world teaches us lessons for living”) to our cover section, makes a compelling metaphor for thinking about the city. You could think of it as city-growing, rather than city-building — opening space for things to emerge in their own shape, rather than being planned and designed in advance.

The theme fits with my longstanding interest in “messy urbanism,” but it also spoke to my own experience of inheriting a garden when I moved into my current home. I thought at first it would be a burden, remembering my youthful chore of having to mow the extensive lawn of the corner house where I grew up. But as Nina-Marie Lister and Lorraine Johnson taught me when I was researching my piece “Letting gardens loose,” lawns are monocultures, not biospheres. The actual experience of living with and managing a small backyard bursting with an ever-shifting diversity of trees, shrubs, flowers, and ground cover — and the butterflies, bees, birds, and animals they attract — has proved to be a profound joy.

Nature is all around us in the city, and if we let it in, our city can be a far more joyful place to live.

At the same time, as all of the pieces in the cover section show, creating a natural environment, paradoxically, takes work. We’ve altered the landscape so much that creating a healthy, diverse biosphere requires conscious effort. To support a landscape that is truly alive and creative, we have to find the right balance between managing, nurturing, and just letting things grow.

Publishing a growth issue just as winter was coming on might seem like perverse timing. But as Hood writes, growth is always happening, sheltering under the earth even as the cold settles over the city. And the issue is a comforting reminder, as we enter our annual fallow period, of the bounty of the summer and fall that we recently experienced, and the renewed growth in the spring that we can look forward to and prepare for.

In the meantime, this winter is bringing a change I and many others have long hoped for, without much expectation that hope would be realized. I first wrote in Spacing in 2008 about how snow on the sidewalk wasn’t plowed in the older parts of Toronto, and I’ve been writing about it and calling for change, as a walking advocate, ever since.

It felt like one of those battles you fight because it’s right, but that you’ll never actually win. But like those Arctic glaciers that seem immovable but suddenly crash into the ocean, this year the barriers finally collapsed (see “Plowed at last”). The City agreed to plow most sidewalks in the older parts of Toronto this winter, with the rest covered the year after. I’m hoping I’ll never have to write about it again (although the service showed some teething troubles after the recent heavy snowfall).

One might wonder whether such a service is really necessary in the age of global warming, but as we are experiencing this January, climate change is erratic. As the polar vortex becomes unstable, we’re getting bouts of extreme cold and heavy snow amid the warmer temperatures. The stresses created by climate change are one of the crucial reasons why we need to integrate nature into the city, and also to tend it carefully, as Todd Irvine explains in “The green canopy of protection.” After the ambivalent results of the COP26 United Nations climate summit in Glasgow in November, we can only hope that our leaders will take real action, for the sake of the continued flourishing of both nature and our cities.