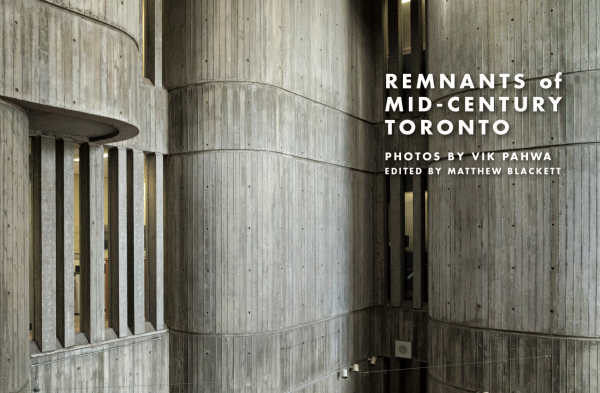 Spacing is proud to announce that our book, Remnants of Mid-Century Toronto, has won the Lieutenant Governor’s Ontario Heritage Award for Excellence in Conservation.

Photographer Vik Pahwa teamed up with Spacing’s Matthew Blackett and a crew of heritage-minded architects from E.R.A. to create connections with Toronto’s mid-century past through essays and photography. Pahwa’s photography captures both the beauty of these structures and the neglect that some currently experience. Many of these buildings are at current risk of demolition, and this collection of photos preserves their structure and memory for future generations. Short written features contextualize these photos with architectural and historical background, which reveal the intentions, ambitions and hopes of a generation of Toronto city builders.

We took the initiative to document the post-war era of Toronto’s growth to inspire readers to understand what 21st-century Toronto has inherited from the 20th-century city, and to demonstrate that the built heritage of this period deserves greater recognition for the impact it has had on the urban landscape of Toronto, as many mid-century buildings enter their heritage status years.

LINK: BUY THE BOOK AT THE SPACING STORE

You can also pick up a copy of the book in-person at our shop: 401 Richmond St West, one block south & east of Queen & Spadina.