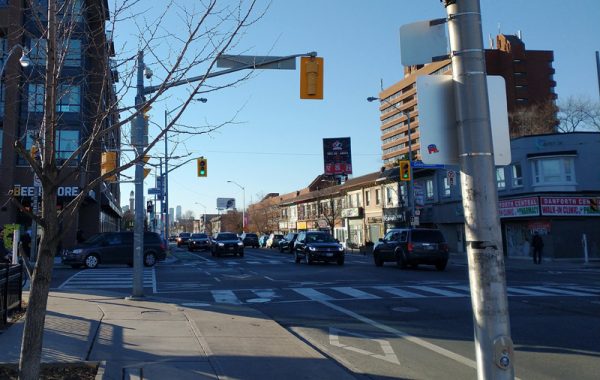 It’s an argument, it turns out, that has been going on for centuries. When new tall or mid-rise buildings are discussed, one of the issues that always seems to come up is the degree to which they will block sunlight and create shadows.

Neighbours will express concern that their access to sunlight will be reduced. City planners will conduct shadow studies to measure that effect. City standards that seek to ensure sunlight on the street, on parks, and for neighbours by restricting height, enforcing angled upper stories, or ensuring space between buildings will be presented and debated.

Meanwhile, housing and development advocates will argue that such regulations and objections are hampering the provision of needed housing in the city. My Spacing colleague John Lorinc asked whether we should perhaps start considering shadows a benefit rather than a problem, and city council recently agreed to remove some of these restrictions in some places.

So I was intrigued, when reading the book Hubbub: Filth, Noise, and Stench in England, 1600-1770, to see a reference to a similar debate in seventeenth-century London, England. A book at the time brought together legal arguments for and against a lawsuit brought by a homeowner, Mr. Hales, against a neighbour whose new house blocked sunlight from reaching the plaintiff’s windows (in fact, it appears to have been a sort of garden suite – of the kind newly allowed in Toronto). I discovered that the book’s text is available online — and some of the arguments used centuries ago echo some of the arguments we still hear today about the subject.

London in the seventeenth century was a metropolis expanding rapidly in size and population due to economic prosperity and in-migration – much like Toronto today. With transportation dependent on human legs or horses, movement was slow and building at the edges of the city was a disadvantage, so the incentive was to build in the already developed parts of the city as much as possible – much as downtown land that reduces the need for a long commute is especially valuable today in Toronto. Unlike Toronto, however, building technology at the time made it impractical to go higher than 3-4 storeys for private dwellings – creating an incentive to fill in all available spaces within the city. It’s that filling of space that appears to have triggered the lawsuit.

We don’t know the details of the lawsuit, only the key question – whether someone can build a house that blocks the light that previously came into his neighbour’s south-facing windows. The book, A Briefe DECLARATION For what manner of speciall Nusance concerning private dwelling Houses, a man may have his remedy Assise, or other Action as the Case requires (1636), summarizes the arguments of four lawyers (“sages in the common law,” says the introduction) in the case, two in favour of the lawsuit and two against. It appears that the lawsuit happened some decades before the publication, probably in the sixteenth century (judging by the dates the lawyers in question were active), but the arguments were likely published in this format decades later because the issue continued to be relevant in the rapidly-growing city.

Sifting through the somewhat rambling early modern legal presentations, some familiar arguments emerge (I have modernized the spelling and grammar). The lawyers alternate for and against the suit, but I have amalgamated them as the arguments on each side are similar.

The lawyers in favour of the lawsuit start with the argument that sunlight is necessary for the enjoyment of one’s house.

The first lawyer argues that, just as a house provides shelter, it also provides health, and it’s vital to “receive comfortable light, and wholesome air” into the house “to preserve man’s body in health.”

“no greater hurt, grievance, or damage can be done to any man’s Freehold, then to take away the light and air thereof, which is comfortable, & commodious for him, for when this light and air are taken from him, his house remains as a dungeon.”

They next argue that the new construction has created what we would describe in modern terms as a negative externality – the negative impact of one’s economic activity on others. In the words of the second lawyer, although the accused “has not meddled with our Freehold, and yet has he hurt our Freehold.” The first lawyer compares it to cutting the water-pipe into someone’s house, or dumping filth on it, as a result of construction. They cite a lawsuit in which a property owner was awarded damages because a neighbour built a lime-kiln whose polluting smoke created a nuisance.

They also argue that the impact of losing sunlight is a form of being deprived of a common good – what could be described as a tragedy of the commons – and that although not all the light to the house has been blocked, blocking part of it is enough to justify the lawsuit.

As a result, they argue, the property owner’s enjoyment of his property has been damaged. Therefore, says the first lawyer, “whoever takes from man so great a commodity as that which preserves man’s health in his house, does in a manner as great wrong as if he deprived him altogether of his Free-hold [property].” In effect, they are arguing that being deprived of sunlight severely impacts the value of a property.

It’s an argument focused on the right of property owners to enjoy their property and maintain its value, which echoes many of the arguments opposing new construction in established neighbourhoods today.

On the other side, the lawyers dispute the argument that sunlight is all that important. Says the second one, “light, and ayre be not things of necessity, but of pleasure.” He adds that as long as some windows are available, that is sufficient.

(He also argues, entertainingly, that the plaintiff having windows that opened into what was previously his neighbour’s garden, where the new house is now built, was itself an intrusion, “for by this means I cannot talk with my friends in my Garden but your servant may see what I do.” But privacy is a whole other debate – though also one that may still resonate.)

When it comes to externalities, the lawyers point out many instances in which it was accepted that people affect their neighbour’s property, arguing it is an inevitable result of properties being adjacent to each other.

More interestingly, they argue that externalities can only be subject to a lawsuit if they result in measurable costs. Lawsuits about externalities, argues the second lawyer, are only valid if they impact on economic well-being, not on pleasures. The lawsuit about smoke succeeded not because the smoke was annoying, but because it destroyed the productivity of the litigant’s fruit trees. Because sunlight does not have a measurable economic impact, goes the argument, it cannot be litigated.

But then the two lawyers open up the argument to speak to larger questions of public policy beyond the narrow rights of property owners. They speak to the broader interest for building in a city, in arguments that likewise echo those of today.

They argue that it’s good for cities to get filled in, and that cities need density both in terms of people and of buildings. Says the first lawyer, “it would not be beautiful that Cities should have any void places in them, and it would be most honourable that they should be populous.”

The second lawyer for the defence echoes that idea, evoking the London neighbourhood of Cheapside. “If one house should not be adjoining unto another, it would bee a great deformity, and if Cheapside were so built, it would be a strange Cheapside.” Instead, he argues, it’s important for London to continue to develop:

The arguments about property values and the need for intensification and development have obvious echoes today. But the argument about only being able to litigate about the effects of externalities based on measurable impacts also has an interesting modern echo, in a case in Toronto brought before the Ontario Municipal Board in the early 2000s that centred on sunlight.

The case took place in the King-Spadina zone, which had been rezoned to allow eight-storey residential and mixed-used buildings. As happened with most developments in the area, the developer of 533 Richmond West (at Portland) sought to build additional storeys. Generally, the impact on sunlight is not a factor considered in appeals about developments. But in this case, across the street from the development was the Alex Wilson Community Garden. The opponents argued that the additional height would deprive the numerous community gardeners of the sunlight they needed for their plants to grow, creating a measurable detriment, and won their case, restricting the new building to the official zoning. The judgement also noted the impact on the solar panels that were in place on the building beside the garden.

It was an unusual case in which sunlight met the sixteenth-century lawyer’s distinction that an externality has to have a measurable impact in order to be remedied. It’s also interesting in terms of the role of the solar panels. At the time, solar panels were uncommon. But as solar energy is increasingly encouraged in the fight against global warming, it raises the question of whether the impact of shadows on solar panels can be considered in discussions of development – or, if not, if the prospect of future development in neighbouring lots needs to be calculated before investing in solar panels.

One significant difference between this historical discussion and current discussions is the role of sunlight on public space. The historical debate was based on a private lawsuit and so only considered the impact on private property. While that remains one of the issues, City regulations are also concerned with the impact on public spaces. The city’s mid-rise standards, for example, govern height and angles in part with the aim of ensuring sunlight on the opposite sidewalk for part of the year.

Another difference is that modern fire codes or zoning might prohibit windows in a wall very close to the property line, or else might enforce a setback from the property line for both houses (in fact one of the opposing lawyers points out that Mr. Hales wouldn’t have this problem if he’d left some setback from his neighbour’s property). In many ways we’ve come to accept some limitations on how a property owner can build, for practical reasons such as fire safety.

But overall, many of the issues debated in early modern London find echoes in today’s debates. Is sunlight a necessity or merely a nice-to-have? What kinds of externalities should we consider in development? What rights can property owners claim, versus what is needed for the vitality of the city as a whole? What is the ideal shape of a city? We tend to associate these debates with the modern ability to build high, but cities are by their nature crowded, so that any building will impact its neighbours even at a low height. These are questions city-dwellers have been debating for many centuries.