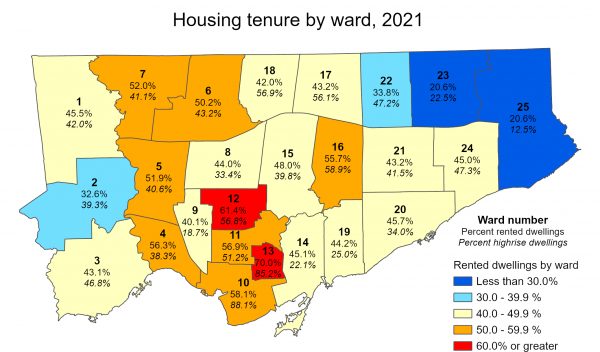 Last week, Statistics Canada released the latest set of data from the 2021 Census, which included information on housing type and tenure. According to the census, more Torontonians rent, and even more live in mid-rise and high-rise apartment buildings, compared to the previous 2016 census. Last year 48.1% of all households in the City of Toronto rented their dwelling, up from 47.2% in 2016. In 2021, 46.7% of all households made their home in buildings that are at least five storeys tall, up from 44.3% five years previous. Given these trends, it would not be surprising to see renters and multistory apartment building residents become the majority of households — and voters — in Toronto in the near future.

However, the distribution of renters and multi-story homes is not even across the city, as the map above illustrates. Northeast Scarborough has the lowest percentages of voters and of multi-story homes. Wards 23 and 25 have just 20.6% of all households rent their homes, and only 12.5% of all homes in Ward 25 — Scarborough-Rouge Park are located in multi-storey apartment buildings (most of those located in the Malvern neighbourbood). Renters make up the majority in central Toronto Wards 10, 11, 12, and 13, while 88% of all homes in Ward 10  Spadina-Fort York are located in multistorey apartment buildings. Though most new buildings going up downtown are built as condominiums, many, if not most residents in those new buildings rent their units from non-resident investors. Renters also make up a majority in Parkdale-High Park, York South-Weston, and in western North York.

Contrary to popular belief, there is no correlation between housing tenancy (owned vs. rented) and voter turnout at the local level. In the 2018 election, Ward 23 — Scarborough North, which had an open council race, had the lowest voter turnout, despite having the highest percentage of households that own their own homes. (Not surprisingly, a conservative-leaning former realtor, Cynthia Lai, was elected in that ward.) Meanwhile, Ward 13 — Toronto Centre, where 70% of all homes are rented, had a higher-than-city-average voter turnout in 2018.

With so many Torontonians renting and living in multi-unit towers, and there being no correlation between turnout and housing type, why do so many of our elected and aspiring municipal representatives cater to homeowners, especially those living in lower-density houses? Shouldn’t we be expecting councillors to worry less about keeping taxes low for single-family homes, and to give more priority to maintaining parks  (which represent a critical amenity for those without backyards), transit and cycling infrastructure (new highrise towers are built with minimal parking for residents these days), road safety for pedestrians and cyclists, and building affordable rental housing?

The answer could lie with the makeup of council, which is whiter and wealthier than Toronto as a whole, and the incredibly long terms of office many councillors have served for. Though Mayor Tory is an anomaly among our elected representatives — he lives in a downtown highrise condo — he also has access to large family estates on Lake Simcoe and in Palm Beach, Florida. Though term limits and municipal parties are often mentioned as solutions, the first-past-the-post voting system allows councillors to get elected and re-elected with very small pluralities. The 47-member council make-up that the city approved for the 2018 election would have opened the door to a more representative government, but due to provincial legislation enacted by the Doug Ford-led Progressive Conservatives, Toronto’s council was cut nearly in half that year; the Province also prohibited ranked ballots from being used by municipal governments.

In short, it is very difficult to elect a municipal government that represents and serves a rapidly changing city. Happily, a few new voices will join council in 2022, but with a status-quo mayor given even more power by the province, and few, if any, incumbents in danger of losing their seats, it will be quite a while until we get a council that looks and lives more like the rest of us.